This post written by Andrew Marino and Andrew Pardoe

Visual C++ in VS “15” Preview 5 now allows you to see where errors are in a line of code—the column number—as opposed to just showing the line number. As C++ has grown it’s increasingly useful to have a little more help finding your errors.

Traditionally Visual C++ would just tell you t.cpp(6): 'f': function does not take 3 arguments. With five different calls to f on one line, it’s hard to figure out where your error is.

But you can do more! You can now show the source context with the column information:

In this mode, the compiler doesn’t just tell you the column, it also points out the error with a caret.

You can control the diagnostics format with a new compiler flag, /diagnostics:. There are currently three arguments accepted: classic, column, and caret.

Controlling the diagnostic output in Visual Studio is as easy as selecting the level under C/C++ -> General options: 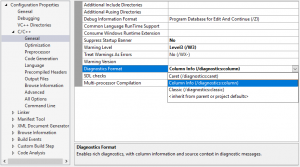 If you select either column or caret, clicking on the error in the error windows will bring the cursor to the column where the error was encountered. For example, the cursor is on the closing parentheses of the call to f that erroneously includes three arguments. Parentheses highlighting (in light grey) shows the scope of the function arguments. 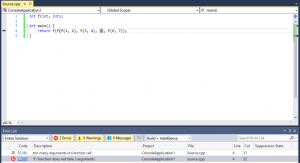 We haven’t just improved diagnostics formatting—we’re making our diagnostics clearer and more helpful across the board. We’ve made improvements in areas such as static asserts, constexpr, and special member functions.

Previously the compiler would tell you the nature of the error:

Now, it additionally tells you why the function was deleted and points you back at the source of the error:

You may occasionally notice that the column information in a diagnostic is incorrect. This can happen because the code contains multiple-byte characters or because of a bug in the compiler’s parser. Because we’ve never displayed the column number there are a few places where we’ve recorded it incorrectly and haven’t yet found the error. Please let us know if you find a code sample where the diagnostic column information is incorrect!

There area also places where the compiler just won’t emit a column number, even though you’ve asked for columns. There are a couple of examples in the diagnostics above:

This happens because we don’t have column number information in all of our diagnostics. We’re working on expanding the coverage.

We know that we’ve got a long way to go before our diagnostics rival those of other popular C++ compilers. A lot of the 30+ year legacy of the Visual C++ compiler shows in our diagnostics quality. But this is a first step, and we’re committed to continuing the improvements.

As always, we welcome your feedback. For problems, let us know via the Report a Problem option, either from the installer or the Visual Studio IDE itself. For suggestions, let us know through UserVoice. And you can always reach us through e-mail at visualcpp@microsoft.com.