If you are just getting started with unit testing in C++, visit our testing startup guide.

There are a few ways to initialize CodeLens:

After performing any of the above actions, CodeLens will appear above each of your unit tests. CodeLens allows you to Run, Debug, and view the Test Status of your unit tests directly in the source file. The test status indicators are the same as the ones in the Test Explorer (Warning 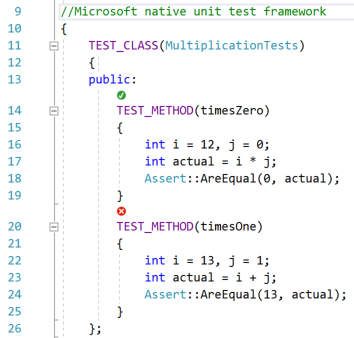 To update the test status, you can Run the test directly from CodeLens above the desired test method.

If your test fails, you can easily view the failure message and Debug straight from CodeLens.

As always, let us know if you run into any issues by reporting them via Help > Send Feedback > Report A Problem from inside the Visual Studio IDE. Additionally, you can view active issues, add comments, and upvote items on  Developer Community . You can also catch me on Twitter @nickuhlenhuth.

Andrew Pardoe
April 20, 2018
0 comment
Announcing a single C++ library manager for Linux, macOS and Windows: Vcpkg
At Microsoft, the core of our vision is “Any Developer, Any App, Any Platform” and we are committed to bringing you the most productive development tools and services...