Today we held the Connect(); //2015 event in New York, where we introduced many new products and features that we’ve been working on. In this post I’ll share the highlights with you, and you can watch the Connect(); event along with many additional on-demand videos on http://www.visualstudio.com/connect2015. 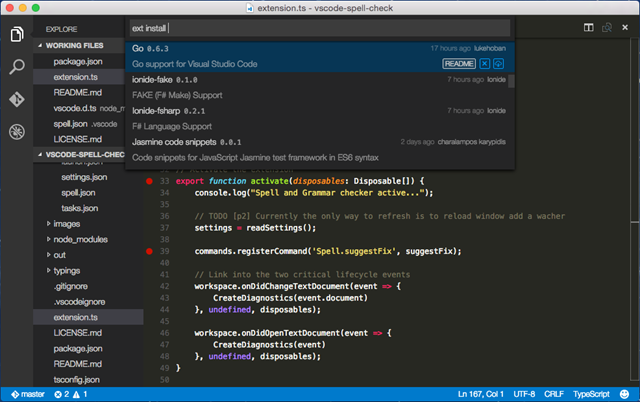 .NET Core 5 RC and ASP.NET 5 RC with Go-Live license. The release candidates of both .NET Core 5 and ASP.NET 5 are now available for Linux, Windows, and OS X with a Go-Live license, so that you can start using it in production environments even though it’s still not at full release yet. ASP.NET 5 RC includes enhancements to both the runtime and tools with a simplified hosting model across Windows, OS X and Linux. You can read more about .NET Core on the .NET team blog, and more on ASP.NET 5 on the ASP.NET team blog and Scott Hanselman’s blog.


Visual Studio Dev Essentials is a new, free program that brings together everything developers need to create applications on any device or operating system including Visual Studio Community and Visual Studio Code, and the free tier of Visual Studio Team Services. Dev Essentials adds priority forum support, training services from Pluralsight, Wintellect, and Xamarin, and—something that many have asked for—monthly credits to use in Azure, which will be coming in early 2016. You can find all the details on https://www.visualstudio.com/products/free-developer-offers-vs.

We’ll offer these subscriptions through the new Visual Studio Marketplace, giving you the convenience of a single bill for both subscription purchases and other Microsoft Azure cloud services like virtual machines and storage.

I’ve previously shared details on this blog about the many features that we put out in the CTP and RC releases; in the full update you can look forward to even more like MS Test and Code Coverage support for ASP.NET 5, parallel test execution, improved code analysis, and an improved NuGet Package Manager experience, along with updated tools for the Universal Windows Platform. Watch this blog for the announcement on November 30th.

With Team Foundation Server, new features include dashboards that provide visibility to a team’s progress of work, code, tests and builds, Git and Team Foundation Version Control in the same team project, the ability to query Kanban columns and SonarQube Analysis build tasks work with on-premises and hosted agents. Brian Harry will let you know all about TFS 2015 Update 1 on his blog also on November 30th.


Xamarin 4 support. We’re excited to announce that Visual Studio 2015 Update 1 will include Xamarin 4 support, providing an end-to-end solution to build, test, and monitor native mobile apps at scale with Visual Studio. Xamarin 4 includes updates to Xamarin Platform, notably rebuilt support for developing iOS apps in VS, making it more convenient to build, debug, and deploy Xamarin.iOS projects from Visual Studio. Xamarin now uses a SSH-based connection to simplify the Visual Studio-to-Mac network connection and provide a faster, more reliable connection over a well-known port. Configuring a Mac for Xamarin and Visual Studio only requires enabling Remote Login, and allows multiple Visual Studio instances to connect simultaneously, making it easier to work in multiple iOS projects at the same time. Xamarin 4 is a big release, with the Xamarin team investing hundreds of hours to improving the performance and stability of mobile development in C#. Visit the Xamarin blog to learn more and get started.


iOS Build with MacinCloud on Visual Studio Team Services. We’ve partnered with MacinCloud to introduce a VS Team Services / VSO build agent plan. For organizations that prefer to not manage Macs in their datacenters or for smaller organizations that would prefer to not maintain dedicated Mac hardware for continuous integration, they can now use Team Services with MacinCloud to do their iOS builds. The plan is currently in preview at $30/month per agent with no limits on build hours. You’ll still need to sign up for the Apple Developer Program to obtain signing certificates and the necessary provisioning profiles to build and release your app, but a MacinCloud agent can be used with the free tier of Visual Studio Team Services through its one complementary “private” agent slot.

Again, you can enjoy the videos from the live announcements as well as more than 70 on-demand videos with additional details on https://channel9.msdn.com/Events/Visual-Studio/Connect-event-2015. And of course we’re already underway with future updates and releases. Let us know what you’d like to see by sharing your feedback, suggestions, thoughts, and ideas on UserVoice , through the in-product feedback UI, or file a bug through the Visual Studio Connect site.

Visual Studio Blog
November 23, 2015
0 comment
Improving your build times with IncrediBuild and Visual Studio 2015
IncrediBuild is a software acceleration technology that allows builds, tests, and other development processes to execute in parallel over a distributed network. It works ...