Improving your build times with IncrediBuild and Visual Studio 2015

IncrediBuild is a software acceleration technology that allows builds, tests, and other development processes to execute in parallel over a distributed network. It works locally on your development box and over a build server, and can also make use of idle CPU cycles in other computers over the entire network. In addition, developers with Visual Studio can use IncrediBuild to scale to the cloud via Azure to add more computing resources, substantially increasing performance, speeding up build time, and improving overall developer productivity. IncrediBuild is used by many Visual Studio customers today and is seen as a leader in the software acceleration technology space. Learn more about IncrediBuild at https://www.incredibuild.com or through is short Connect video about IncrediBuild.

With Visual Studio 2015 (both the RTM and Update 1 releases), developers see a Build Accelerator template in the File > New project dialog, which will install IncrediBuild:

By installing IncrediBuild in Visual Studio through the Build Accelerator template, you can leverage the following features free of cost (these were previously available only as a part of the paid IncrediBuild SKU):

In our internal test labs, we’ve seen a 10-20% improvements in most end-to-end application build times. The figure below, for example, illustrates build times achieved with predictive execution building across 8 cores on a single development machine for the popular C++ source-base Adaptive Computation Environment (ACE) Libraries: We are really excited about this partnership with IncrediBuild and what it means for you! Learn more at https://www.incredibuild.com/microsoft-incredibuild-partnership.html, and through two Channel9 videos: What is Incredibuild? and Incredibuild with Visual Studio 2015 Update 1. 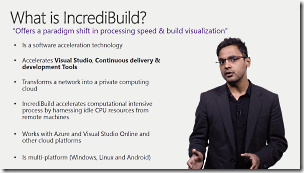 We’d also love to hear your experience as you try this out in your development environments. Reach out to me directly via aasthan (at) microsoft.com.

Connect(“demos”); // 2015: HealthClinic.biz
During Connect(); //2015 we showcased many technologies available to you as a developer across Azure, Office, Windows, Visual Studio and Visual Studio Team Services. ...

Visual Studio Blog
December 8, 2015
0 comment
The .NET Journey: Recapping the last year
Having just completed Connect(); // 2015, we thought to take a moment to review everything that’s happened with .NET over the last year, between last year's and ...