Update 9 of the Visual Studio Tools for Apache Cordova (TACO) is ready for you! You’ll soon see a notification in Visual Studio to install the update or you can download and install it directly, now. If this is the first you’ve heard of TACO, take a moment and learn more about our mobile developer tools for web developers.

This release includes all of the goodness of TACO Update 8, which focused on giving you more control of your dev environment and providing better guidance for plugins. Update 9 focuses on two main themes:

Saving you a trip to the command line

When building apps with Apache Cordova, you’re going to use plugins to access native device capabilities (e.g. the Camera). Visual Studio TACO has always had tools to help you manage these plugins. It provides several ways to install common and custom plugins and now we’ve added a new option that lets you simply add a plugin by using its id.

Typically, you may want to install a plugin by id, when you want to use a custom plugin from the Cordova Plugin Repository. You could do this with the Cordova command line interface, by opening a command prompt and typing the command cordova plugin add <id>. We wanted to save you that trip over to the command line, so that you can stay focused on your code!

Now, just go to the Custom tab of the configuration designer, enter your plugin ID, and go.

When first creating a project using the Cordova blank template, we’ve redesigned the start page to make it easier for you to get going with your first application. The layout and content was rearranged so that you can quickly read over the important steps for getting started, and all of our links on this page were updated to point at the latest and best information. 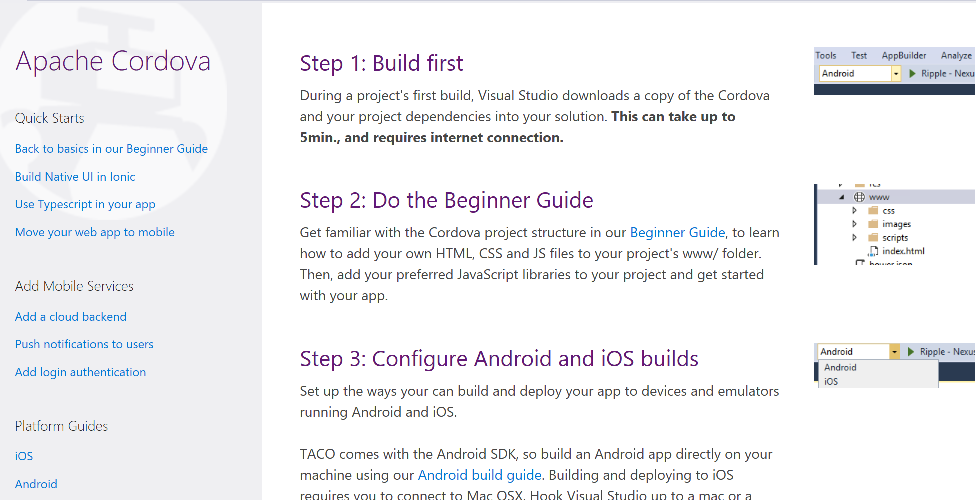 Along with the changes mentioned here, we also fixed many bugs to improve the stability and performance of Visual Studio TACO. You can read about the full release in the Update 9 release notes.

It’s hard to believe this is our ninth release since Visual Studio 2015 RTM – We couldn’t do it without your support and feedback! Thank you for all of your direct emails, discussions on Stack Overflow, and feedback shared on our documentation site.

If you haven’t done it by now, go download update 9 and let us know what you think!

Top New from March 2016
Yes, it might seem a bit odd to have a post with “March” in the title now that it’s already May, but it does take a few weeks for the data to show what you’ve all...