Last fall we introduced Visual Studio Mobile Center (Preview), a cloud service designed to help developers manage the lifecycle of their mobile apps and ship higher-quality apps faster than ever. Today we announced several exciting improvements that expand the features of the service and extend Mobile Center to new audiences and platforms. From the beginning, we designed Mobile Center to help all application developers build and ship higher quality apps faster. We want every developer on every platform to be first-class citizens. At Microsoft Build 2017 this morning, we’ve added support for Windows apps alongside iOS and Android. Starting today, Universal Windows Platform (UWP) developers have access to Mobile Center’s Build, Distribute, Analytics, and brand new Push services. The Crashes and Test service will become available later this year.

A great CI/CD pipeline is critical to delivering software quickly and with confidence. The Mobile Center Build, Test, and Distribute services are designed to make this a part of every developer’s workflow. Our Crash reporting and Analytics services ensure that you can learn about each release’s quality and usage, but a common request we’ve heard from developers is the ability to send Push messages using Mobile Center Analytics data to help ensure that the right end-user is receiving timely notifications. This tightens the loop from check-in all the way through deep engagement with end-users.

With our new Push service, Mobile Center developers can send targeted messages to specific sets of users at exactly the right time. Customers can create segments based on over a dozen different properties, including carrier, language, device model, screen size, and time zone, with many more to come. If you want to try out the new Push service, please contact us via our in-app support. 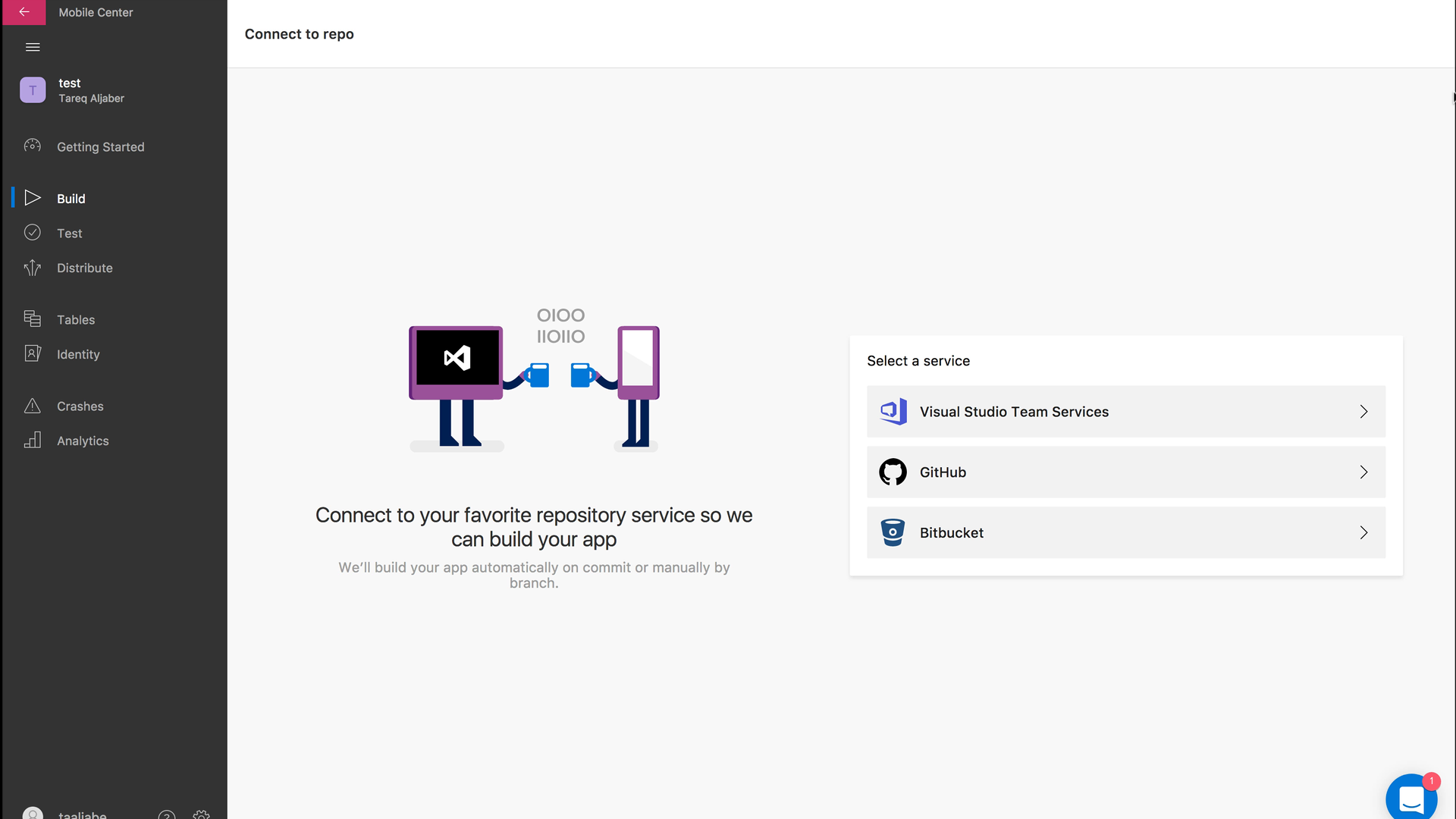 We’re huge fans of GitHub, so it became our first choice when we launched the Mobile Center Build service last November. We also believe in flexibility and choice, though, so today we’re proud to announce support for git repositories from Visual Studio Team Services and Bitbucket. All repositories and services offer the same features, including our powerful build-on-push feature and our new launch test.

Several Preview customers told us they loved our Test service, but they wanted to write their tests in a more familiar, platform-specific framework. We listened, and we now support XCUITest and Espresso, the native test frameworks for iOS and Android. Now developers can write their automated UI tests in their preferred languages and port existing tests to Mobile Center Test.

Mobile Center has offered a powerful beta tester distribution service since our first preview, with successful builds automatically sent to testers with ease. Developers have told us they’d love this same mechanism to let them deploy the applications to app stores and company portals.

With our new enhancements to the Distribute service, once a developer is confident about their apps quality, they can promote the latest build directly to an app store or company portal. Today you can do this with Google Play, and very soon we’ll be adding connectors for Intune, the App Store, and the Windows Store. Mobile Center is the next generation of HockeyApp. Starting today, we’re launching the first step in our transition plan for HockeyApp users: use existing apps from HockeyApp inside Mobile Center, analyze crash reports and analytics, and connect to the Build, Test, and Push services.

We’re rolling this feature out to HockeyApp users over time and developers will get an email when we’re ready to extend this to their apps.

New mobile platforms, testing frameworks, push services, and repo support are just the beginning—we have a lot more coming soon. Deployments to consumer app stores and secure private portals will be coming in the next few months, as will increased support for UWP, parity with our HockeyApp and Test Cloud services, and entirely new cloud development services. Sign up now to get started!