The Professional Developers Conference (PDC) this year is in Los Angeles from November 17th to 19th. The PDC is an opportunity to mingle with architects and developers from the software industry and to listen to the leaders, heroes and legends from Microsoft and its industry partners. As well as workshops and training sessions, there are hands on labs, a product pavilion and “ask the experts” Q&A discussions. This year’s keynote speakers are Ray Ozzie and Bob Muglia. Joining them on stage will be Kurt DelBene and Scott Guthrie. 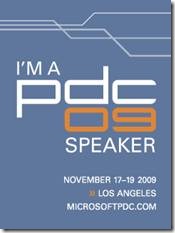 A few days prior to the Windows 7 launch last week, we announced the general availability of Visual Studio 2010 Beta 2. So, by the start of the PDC attendees will have had four weeks to try it out and explore its capabilities. Many of the sessions at PDC this year will showcase Visual Studio’s wealth of new features: Azure tooling for the cloud, Silverlight for the web, parallel tools for scalable concurrency, new debugging tools such as IntelliTrace, tools for Microsoft Office such as SharePoint Server, and that’s just the start; the list goes on.

One of the sessions I’d like to announce here is being given by the Visual Studio Platform team’s very own Paul Harrington. Paul was invited by the Windows Presentation Foundation (WPF) team to present a session entitled “How Microsoft Visual Studio 2010 Was Built with WPF 4”. For Visual Studio 2010, Paul led the feature crew which took the existing Visual Studio 2008 IDE and converted it to managed code with WPF. In the session Paul will explain how this feat was accomplished and talk about some of the obstacles they had to overcome along the way.

We’re incredibly proud of the results of this work, not only in Visual Studio 2010 itself, but also in the improvements that the Visual Studio Platform team helped make in WPF 4. Those improvements, bug fixes, new features and performance tweaks will make it easier and faster for others to develop world-class software using WPF.

Toolbox Search
Hi, my name’s Josh and I’m a developer on the VS Shell team.  Among other things, I’m responsible for the Toolbox.  In VS 2010 Beta2, we’ve added the ...