Microsoft Scripting Guy, Ed Wilson, is here. I registered for Windows PowerShell Saturday #007, which will be held in Charlotte, NC. I am going to be presenting one or two talks (now I am scheduled for two talks, but we may end up with a special guest, and if we do, I will give him one of my slots). The lineup of speakers is absolutely stellar. I know that the Scripting Wife is busy working on a blog post that will describe the speakers and their sessions. This event is going to be the most awesome event outside of the Windows PowerShell Summit.

There are thousands of WMI classes available in modern versions of Windows. The classes seem to vary in terms of usefulness, but they do represent a broad spectrum of classes. For some good articles about working with Windows PowerShell and WMI, see this collection of Hey, Scipting Guy! Blog posts.

One of the problems with WMI is that the classes are narrowly defined. I mean, one class covers the computer hardware, and another class covers the computer operating system. I generally want to know about both. For example, if I have a version of Windows that is running in 32-bit mode, I generally want to know if the hardware will support 64-bit, because I may want to reinstall the operating system to take advantage of greater amounts of memory.

An easy way to do this is to return a single object that contains the information I need.

The first step is to gather the data. I decided to query two WMI classes and combine the output into a custom object that I need. The first command queries the Win32_ComputerSystem WMI class. I opened the Windows PowerShell console, and piped the results to the Format-List cmdlet to examine the information that is available from the class. The command is shown here:

Note  One of the advantages of using the Get-CimInstance cmdlet is that tab expansion works for the WMI classes, so I do not have to type the entire class name. On my laptop, I type Win32_Computer<tab> and it picks up the class on the second Tab press.

The output from the previous command is shown here: 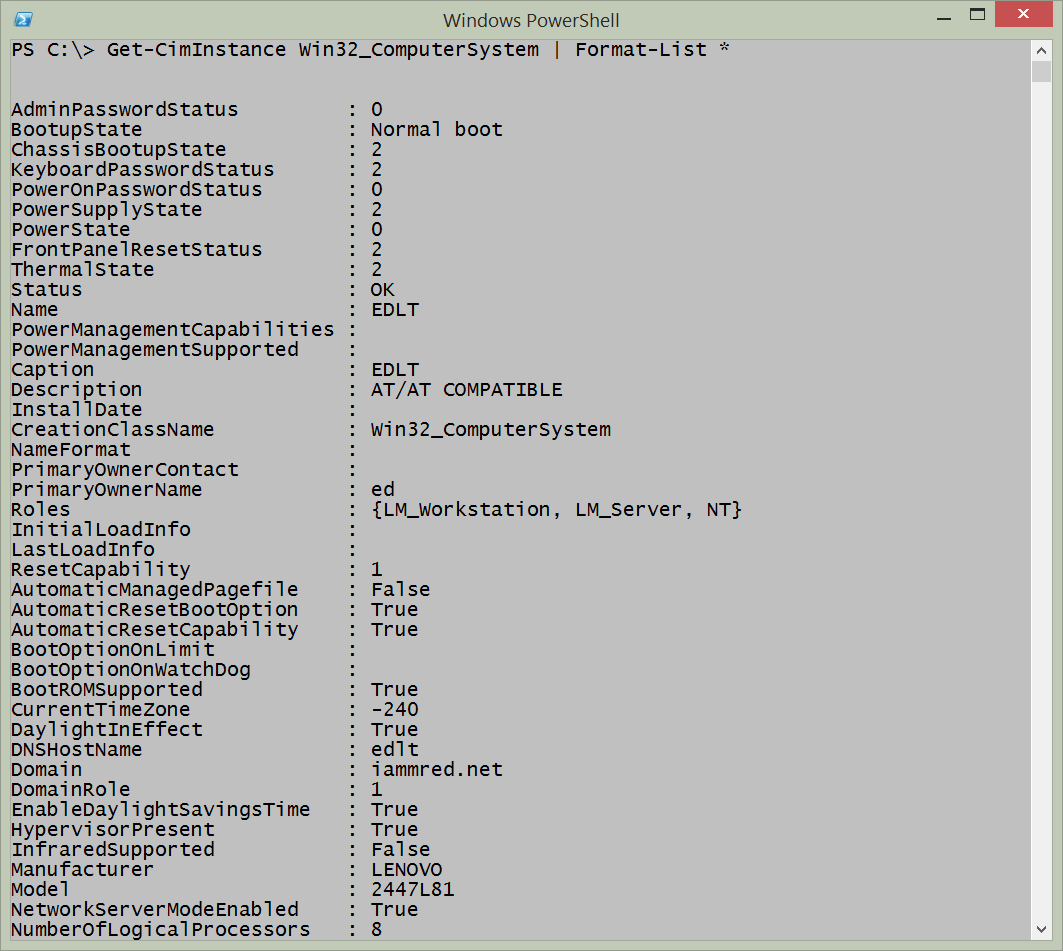 I have the Windows PowerShell console pushed off of my main screen to my secondary monitor, so it is easy to refer to the output while I decide which properties I need to access.

I then do the same thing with the Win32_OperatingSystem WMI class as shown here:

The command and output appear in the following image: 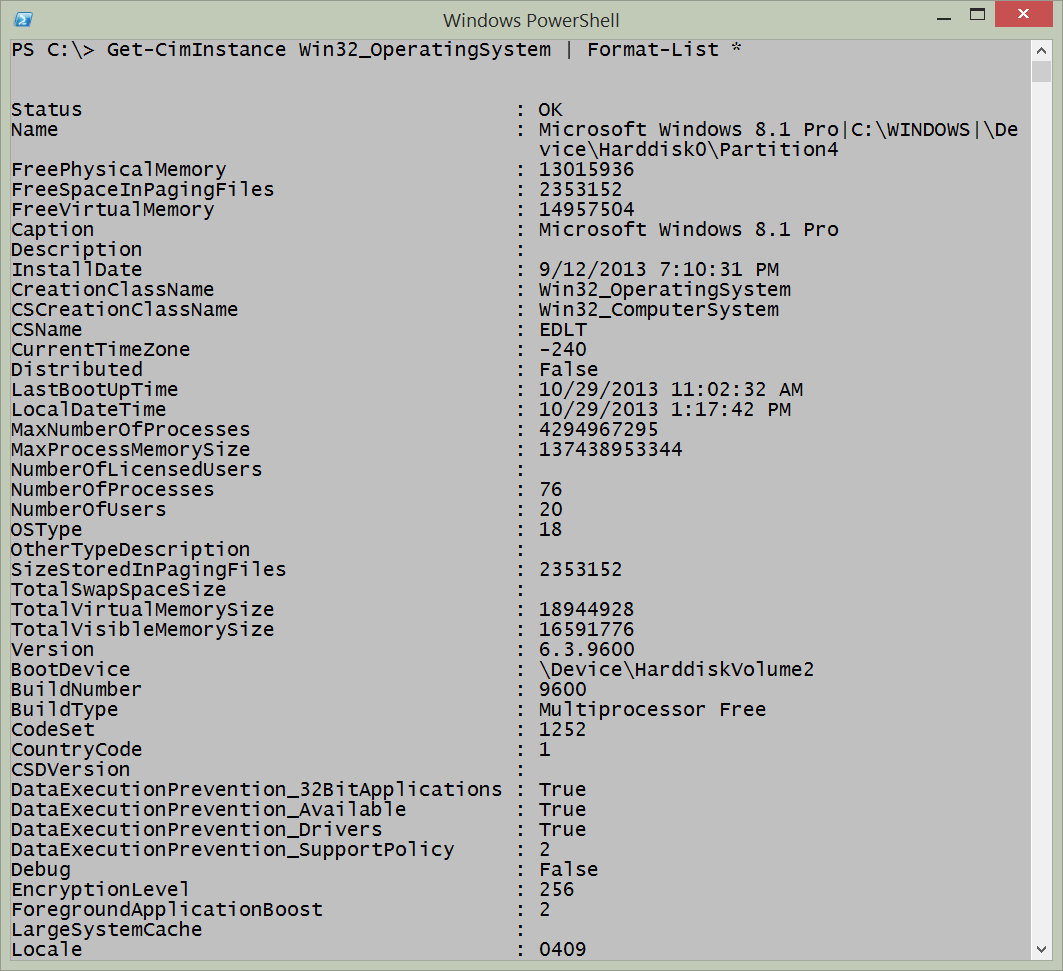 From the Win32_ComputerSystem WMI class, I need the make, model, system type, and DNS name of the computer. I decide to combine the host name and the domain name to create the fully qualified domain name of my system. Here is that portion of the script:

When I run the script, it returns a nice object. I could then do anything I want to do with this new object. 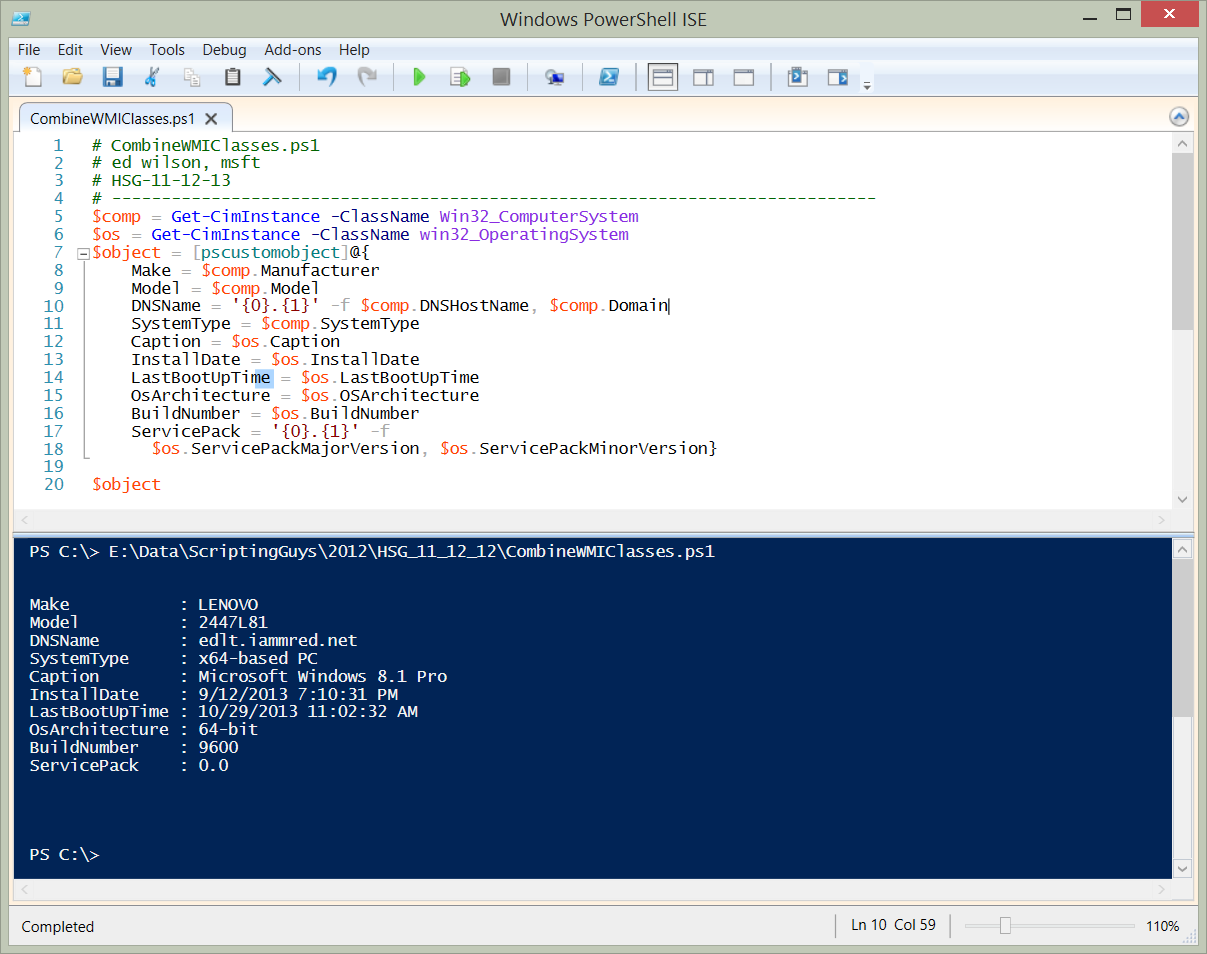