The best part of being the Scripting Wife is going to events with Ed and meeting people. I especially love TechEd because there are about 10,000 people there, and I get to meet a lot of them.  The Windows PowerShell community has become my family, and I hope they feel the same way about me. I truly thrive on helping others and love the personal interaction with people at the in-person events.

I have made some lasting friendships, and feel that at Microsoft TechEd 2011 (which was my first TechEd), I encouraged other beginners to learn Windows PowerShell. This year, I hope that I have been beneficial to those starting new User Groups or resurrecting lagging ones. See my blog post from last week about starting a user group.

TechEd 2012 started a bit differently this year as Ed and I attended a couple of welcome parties. The first was with O’Reilly Media (because Ed is one of their authors). I was able to get reacquainted with Marsee Henon and Ken Jones plus make a new friend, Lori Keam. The Krewe Meet ‘n Greet was next. I had the opportunity to meet the business partner of one of my best friends, Don Jones. Greg Shields is the other half of Concentrated Technologies, and after spending one evening with Greg, I can see why these two men are business partners. They are absolutely wonderful men, and they are so intelligent that they make my head explode.

During the Meet ‘n Greet, I was fortunate enough to meet one of the winners from the 2012 Scripting Games, Lido Paglia. Let me say, I also had the pleasure to talk a few minutes with some of the Krewe, like Matthew Griffin and Scott Ladewig for the first time. The rest of the time, I spent gathering hugs and words from existing friends like Sean Kearney, Aleksandar Nikolic, Jason Hofferle, Dan Cruz, David Corrales, Ferdinand Rios, Chris Gannon, and so many others that I cannot name everyone.

Monday, we started off with what wound up being a Windows PowerShell breakfast that became the normal breakfast routine. Once again throughout the four days, I was able to enjoy conversations and hugs at breakfast with new and existing friends. A typical day included Rohn Edwards, a new friend and winner of the Advanced category in the 2012 Scripting Games, Lido Paglia, Dan Cruz, Will Murphy, Jason Milczek, Jason Hofferle, Boe Prox, and others.

Just before the Expo Hall opened on Monday, I slipped away from the Scripting Guys booth to make my way around to see others at their booths that I might not have gotten to see otherwise. I checked in with Glenn Sizemore and John Fulbright at the Net App booth; Nicole at the Select Software booth; and David, Ferdinand, and Robert at the Sapien booth. I accidently discovered Eric Madariaga at  the nSoftware booth. We did not chat long, but at least I was able to put a face with the name and voice. I was familiar with Eric through my volunteer work as the booking agent for the PowerScripting Podcast that is hosted by Windows PowerShell MVP, Hal Rottenberg, and Jonathan Walz.

It was finally time for the Expo Hall to be open to the attendees. What fun! I am not a great scripter, and I deliberately forget most of what Ed teaches me for the Scripting Games or else I would not get to be a beginner next year. That is right, I am the training tool Ed uses each year to show that you too can learn to use Windows PowerShell.

My role at the Scripting Guy booth is to meet and greet people as they come to the booth—especially if Ed or the other booth person (this year it was Dan Cruz) are busy talking with someone else. I try to just interact with people, find out if they are new to Windows PowerShell or if they are an experienced user. If they are currently using Windows PowerShell and have a specific question, I ask them to hang out for a minute until someone with expertise can assist. Or I have been known to look around the booth to see if there is one of my friends there who I can ask about answering the question. This year, I relied on Boe Prox and Jason Helmick a few times. That is the joy of the Windows PowerShell community—everyone is always happy to help answer questions. The following photo shows one such occasion when Jason Helmick jumped in to answer a few Windows PowerShell questions. 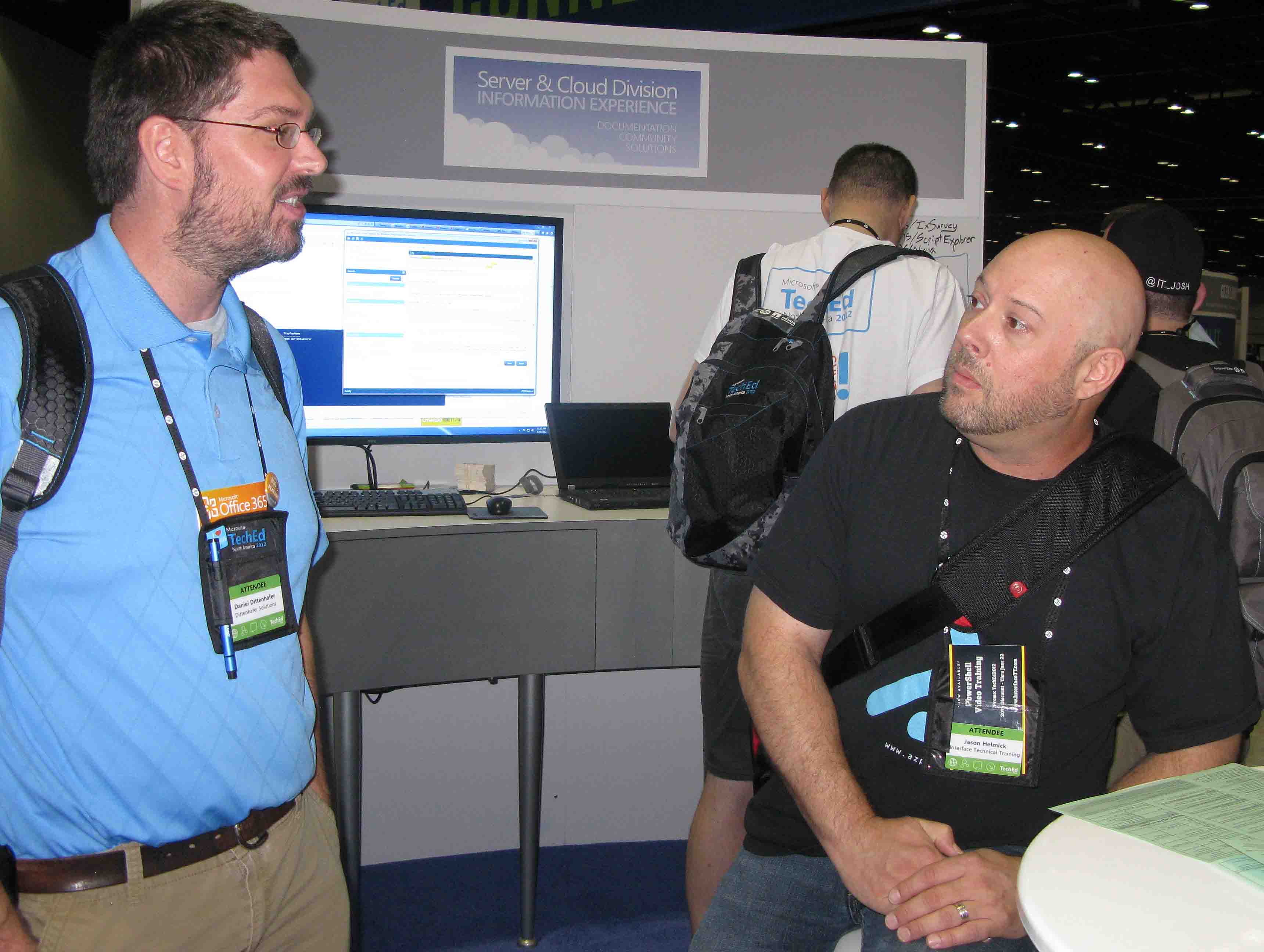 If the person visiting the booth is new to Windows PowerShell, I know how to answer their question about where to start, and I always ask where they are from just in case there is a Windows PowerShell User Group in their area. I directed several people to the Houston User Group in particular because they are just getting started—plus a couple to the Central Ohio and Wisconsin groups.

The next fun part was talking to the people who are interested in starting user groups in their areas. I won’t completely spoil the fun, but I also want to make sure to help advertise—so if you are in Mississippi, Philadelphia, or northeast Florida, I predict wonderful news in your near future. Another exciting thing is the revitalization of at least one group that I know about…and that is Indianapolis. Thanks to John G for leading that effort to get them rolling again.

During the course of the week, I finally got to meet one of my long-time virtual friends, Jeff Truman, aka Script Warrior. Sadly, I do not have one single picture of me with Jeff. Guess that is incentive to find a way to meet again in person. Wait a minute—this is a Windows PowerShell person I am talking about. Let me email Jeff and see if he has a picture.  Presto! Thanks to Jeff, I now have a picture of the two of us to share: 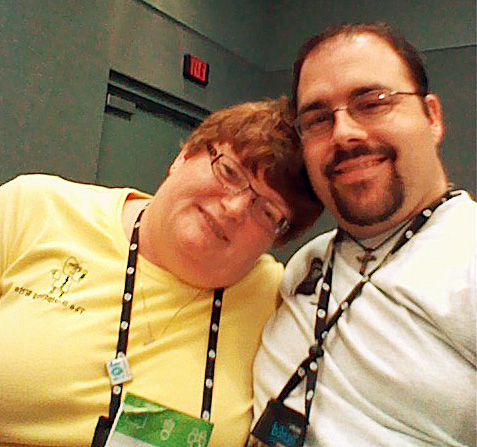 When you attend TechEd, please stop by the Scripting Guys booth. You never know who may show up. Maybe your picture will be next! With that, Ed says I am out of space so I will continue my journey through TechEd 2012 tomorrow.