Summary: In this exciting conclusion to the Microsoft TechEd 2012 reports, the Scripting Wife discusses her interactions with Windows PowerShell users.

Hello scripters. I hope to not be so long winded today as I continue to share with you my adventures at Microsoft TechEd 2012.

Tuesday, I spent most of the day at the Scripting Guys booth, and Tuesday evening we hosted a table at Community Night. We started with the three Scripting Guy booth staffers, Ed, myself, and Dan Cruz. Dan was the winner of the Microsoft TechEd 2011 pass in the Scripting Games Beginner category. He volunteered then to help out with the booth this year if we needed someone. Dan is such a great example of the difference a year can make in your knowledge of Windows PowerShell.

Anyway, we started out with the three of us, and I lost track of how many people we wound up talking to that night. I do know that I talked with Michelle from Columbus, OH, and I gave her the information about the Central Ohio PowerShell User Group in Columbus with Wes Stahler as the leader. And we talked with John G about resurrecting the Indianapolis User Group. I encourage you to go to the PowerShell Groups site and sign up as a member for a group in your city. If there is not a group in your city, you can join the Virtual User Group. The next thing would be to consider starting a user group in your location.

Wednesday was another day at the Scripting Guys booth. That day was a little different because Ed had to leave the booth to cohost the Birds-of-a-Feather session with Don Jones. The topic of course, was Best Practices for Windows PowerShell. Luckily, Ed had someone else use his camera for pictures, and I can share one with you: Wednesday evening found us out for dinner with the Windows PowerShell team. It was fun to meet more of the team and actually get to talk with them. Erin Chapple is lovely to visit with, and words just are not adequate to describe Jeffrey Snover. We had a surprise visitor during dinner—Windows PowerShell MVP, Jonathan Noble, popped in from his vacation and spent a little time with us. Here is proof: Thursday brought an end to TechEd. After the Expo Hall closed, there was a repeat of the Birds-of-a-Feather session; and MVP, Jeffery Hicks, cohosted with Ed for this session. 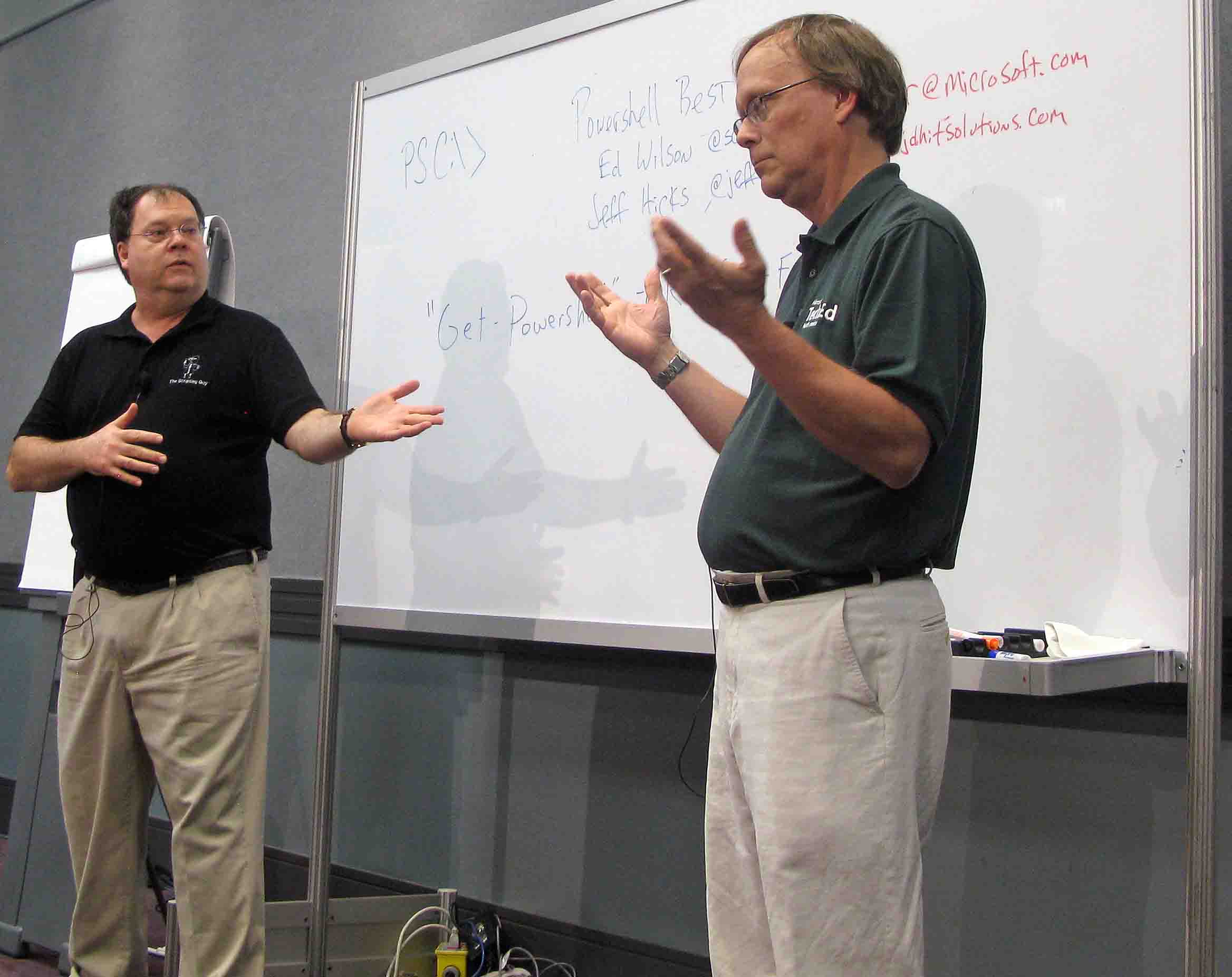 What would TechEd be at the Scripting Guys booth without special guests? The line-up this year included Don Jones, Jeffery Hicks, Jeffrey Snover, Mark Minasi, Matthew Reynolds, Rohn Edwards, and Lido Paglia (Rohn and Lido are the TechEd pass winners for winning the 2012 Scripting Games). Plus there was the added bonus of impromptu guests like Boe Prox, Jason Helmick, Travis Jones, Osama Sajid, Sean Kearney and Clint Huffman. Here is a picture with Mark Minasi: 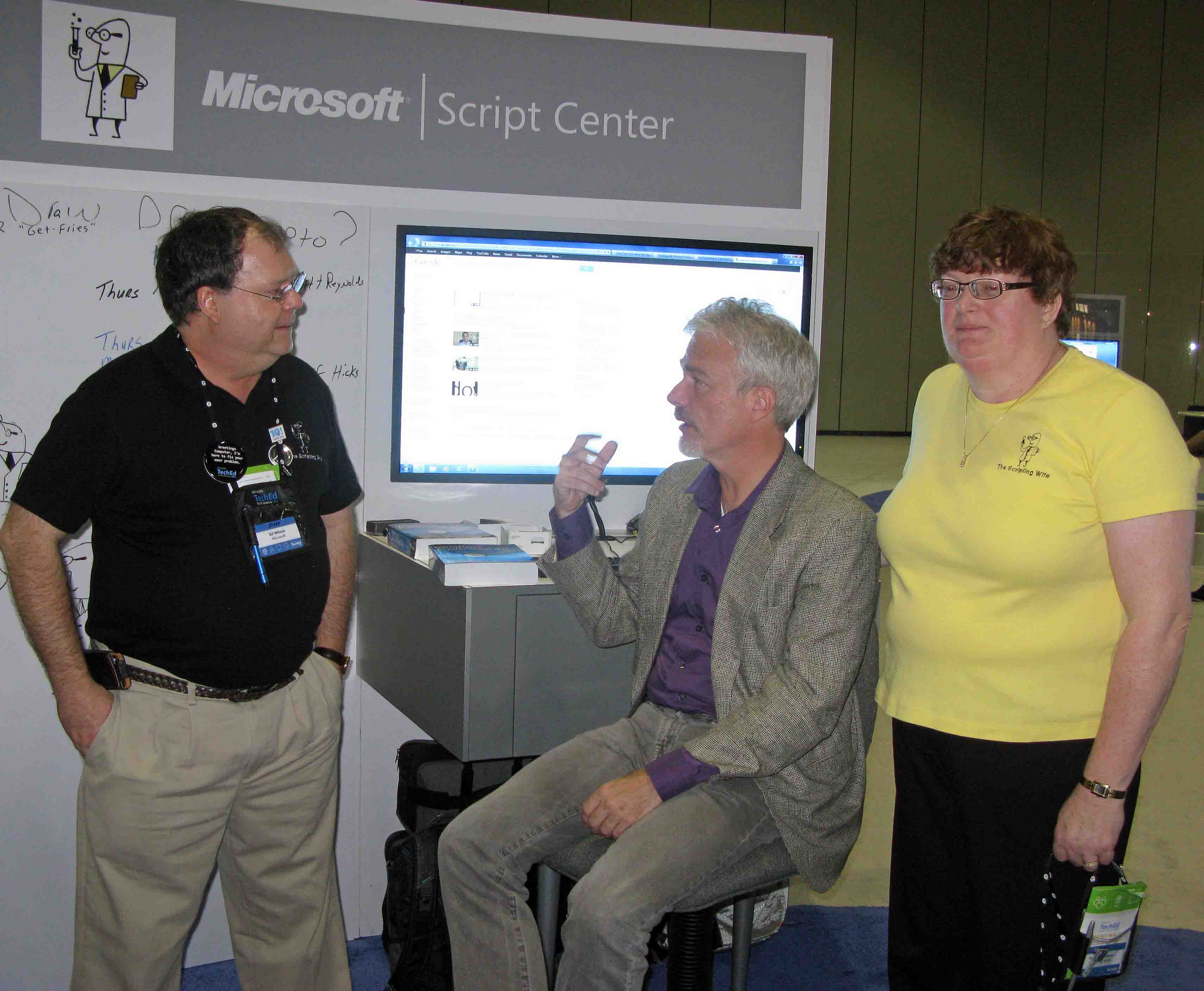 Ed says that I need to wrap it up. Thanks to everyone who stopped by the Scripting Guys booth and for all the conversations and hugs. If you are in the Charlotte, NC area, remember that there will be a PowerShell Saturday event coming on September 15. Speakers and sign-up info will be available soon. In the meantime, the next Charlotte PowerShell User Group meeting will be Thursday, July 5.

Follow Ed on Twitter and Facebook. I invite you to check out more pictures from Microsoft TechEd 2012 on the Scripting Guys Facebook page. If you have any questions, send email to scripter@microsoft.com, or post your questions on the Official Scripting Guys Forum.