Cool Stuff about PowerShell 5.0 in Windows 10

Microsoft Scripting Guy, Ed Wilson, is here. Over the weekend, I installed Windows 10. It is way cool. I love what we have done with the charms bar…it is gone. I also like the streamlined user interface, the new Edge browser, and especially Windows PowerShell 5.0. I mean, it is awesome. It rocks.

What is so cool about PowerShell 5.0?

I am not going to enable scripting right now. I will do that later. For now, I am exploring. I also need to open Windows PowerShell as an Administrator and update Help. Teresa also talked about how to do that yesterday.

I will admit that when I first heard about Get-Clipboard and Set-Clipboard, I figured they would be pretty lame. I mean, I have been piping to Clip.exe for years. In addition to that, there are Clipboard cmdlets in the PowerShell Community Extension Project, so I figured this was just some low hanging fruit that was easy for the Windows PowerShell team to add.

Really, though, it is pretty cool.

First of all, I can pipe strings to Set-Clipboard and then get it back via Get-Clipboard. It works as expected.

But, when I pipe a directory list to Set-Clipboard, and then I use Get-Clipboard, I don’t get anything back—until I specify the format I want as a FileDropList. As shown here, I then get back a collection of objects: 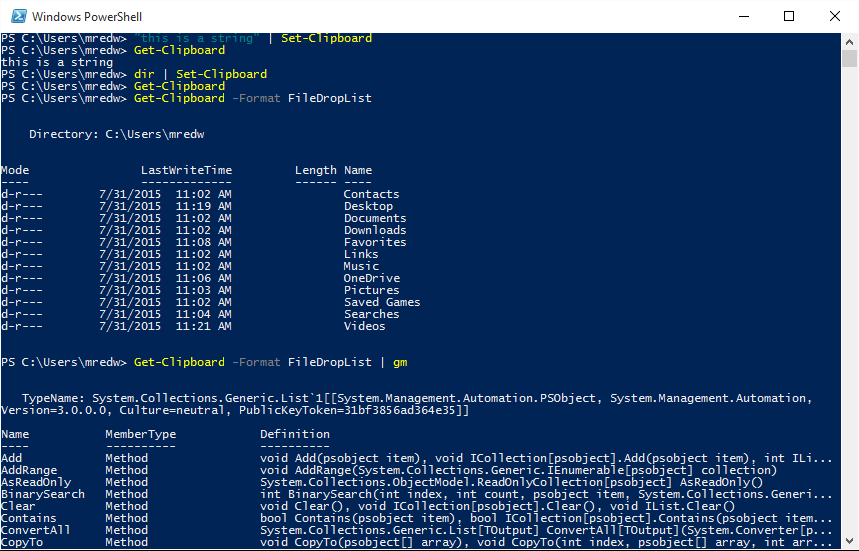 Of course, it should come as no surprise that we have an object-oriented Clipboard. I mean, everything in Windows PowerShell is an object, so why not the Clipboard? This also means that I can index into the Clipboard, and return a FileInfo object. This is shown here: At this point, I am starting to think, “You have got to be kidding. Really? Objects on the Clipboard?” Dude, dude, dude."

I know how to use objects and how to work with collections of objects. I mean, this is awesome stuff. I can grab only the base names from the collection of objects, or I can create a table with the base name and the last access time—all from the same Clipboard content. This is shown here: 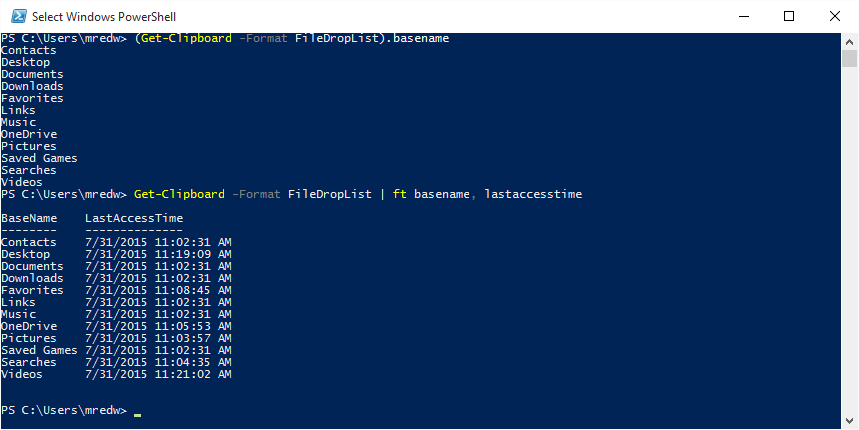 So, yeah. The Clipboard cmdlets are cool. Way cool. And that is just two of the 1,285 Windows PowerShell cmdlets in Windows 10.

That is just scratching the surface of Windows PowerShell 5.0. Join me tomorrow when I will talk about more cool stuff.