Summary: Microsoft Scripting Guy, Ed Wilson, talks about using the Windows Powershell transcript tool to keep track of commands that are run in a session.

Microsoft Scripting Guy, Ed Wilson, is here. I am busting out all over and I hardly know where to begin. Suffice it to say that TechReady 15 in Seattle was awesome. I especially loved the Ask the Experts session on Wednesday night. I always love the Ask the Experts sessions—the one at TechEd in Orlando this year was awesome, as was the one in Atlanta the year before.

Of course, I thought my session, Using Windows PowerShell 3.0 to Manage the Remote Windows 8 Desktop was really cool (and well received)—so I am going to present a version of it at PowerShell Saturday in Charlotte, North Carolina on September 15, 2012. The registration for this high-profile event opens tomorrow, July 30, 2012. The PowerShell Saturday event in Columbus, Ohio sold out in 13 days, and I expect the one in Charlotte to be no different. Therefore, if you want to attend, you need to begin queuing up at your keyboard around midnight Pacific Time in preparation for the 200 tickets to go on sale.

Recently, JRV posted on one of my blog posts (he does that a lot), and he stated that I must have access to some secret inside vault of information (my words, not his) because of all the cool stuff I come up with in my postings (again, my words, not his). This brings up an interesting story…

When Microsoft hired me eleven years ago, one of the things I was really looking forward to was getting to see “all the secret stuff.” After a month, I emailed my friend Bill (Mell, not Gates), and I told him, “Dude, there is no secret stuff.” Obviously, when products are in development, we need to guard our secrets. But after it ships, there is no secret vault of information (at least not where I am concerned).

How to find out the cool stuff about PowerShell

Therefore, if I find a really cool thing I can do in Windows PowerShell, I already have a record of that cool thing. There is only one problem with this approach: it quickly becomes unruly. With no management of the transcripts, it does not take long to fill up the Documents folder as shown here on my Windows 8 laptop. 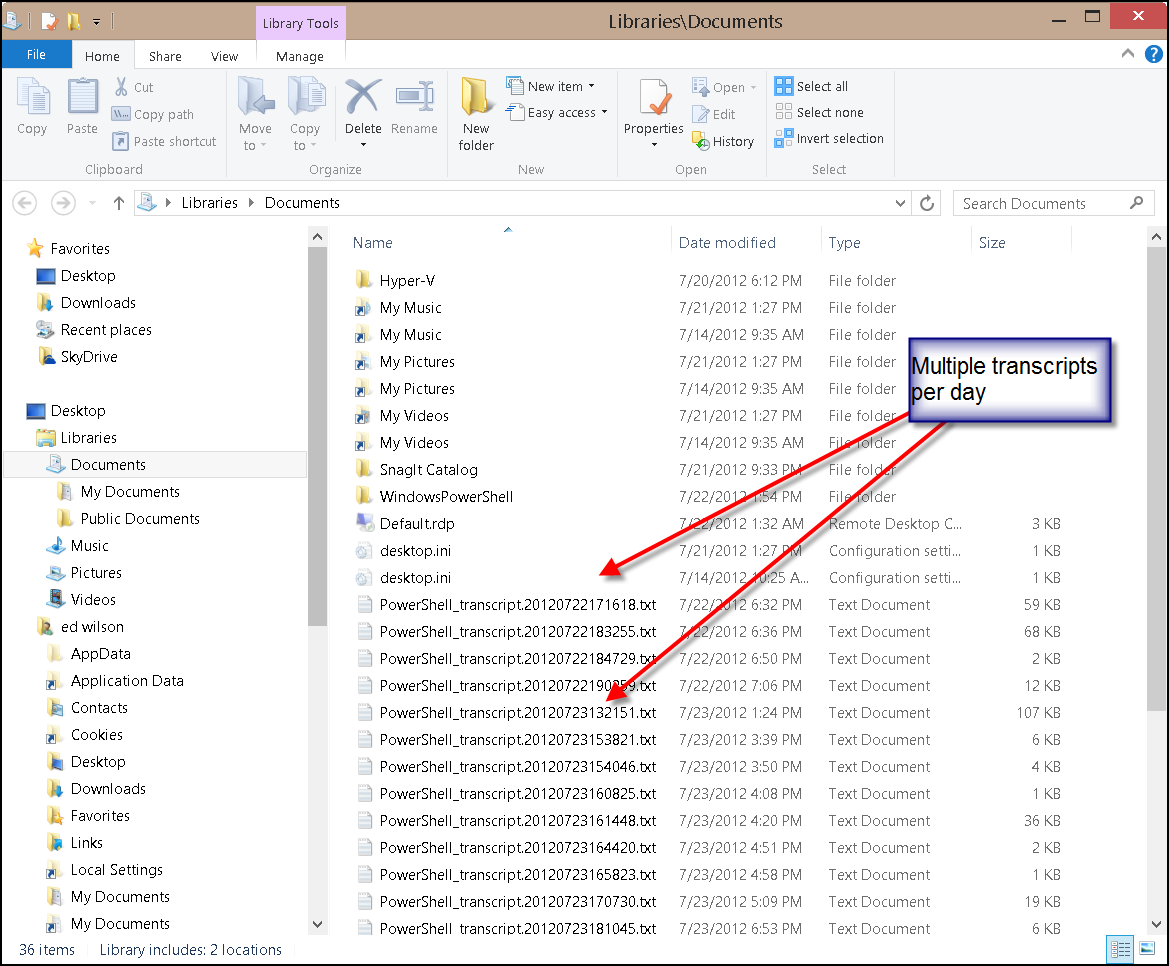 With opening and closing the Windows PowerShell console several times a day, it does not take very long until the folder is filled with transcript files. One thing that can help in finding commands is to use the desktop Search tool. (I always ensure that I do a full text index for text files in addition to all of the Windows PowerShell type of files). With the Content view of files, you can easily see an idea of what is inside of a particular transcript file. This is shown in the image that follows. 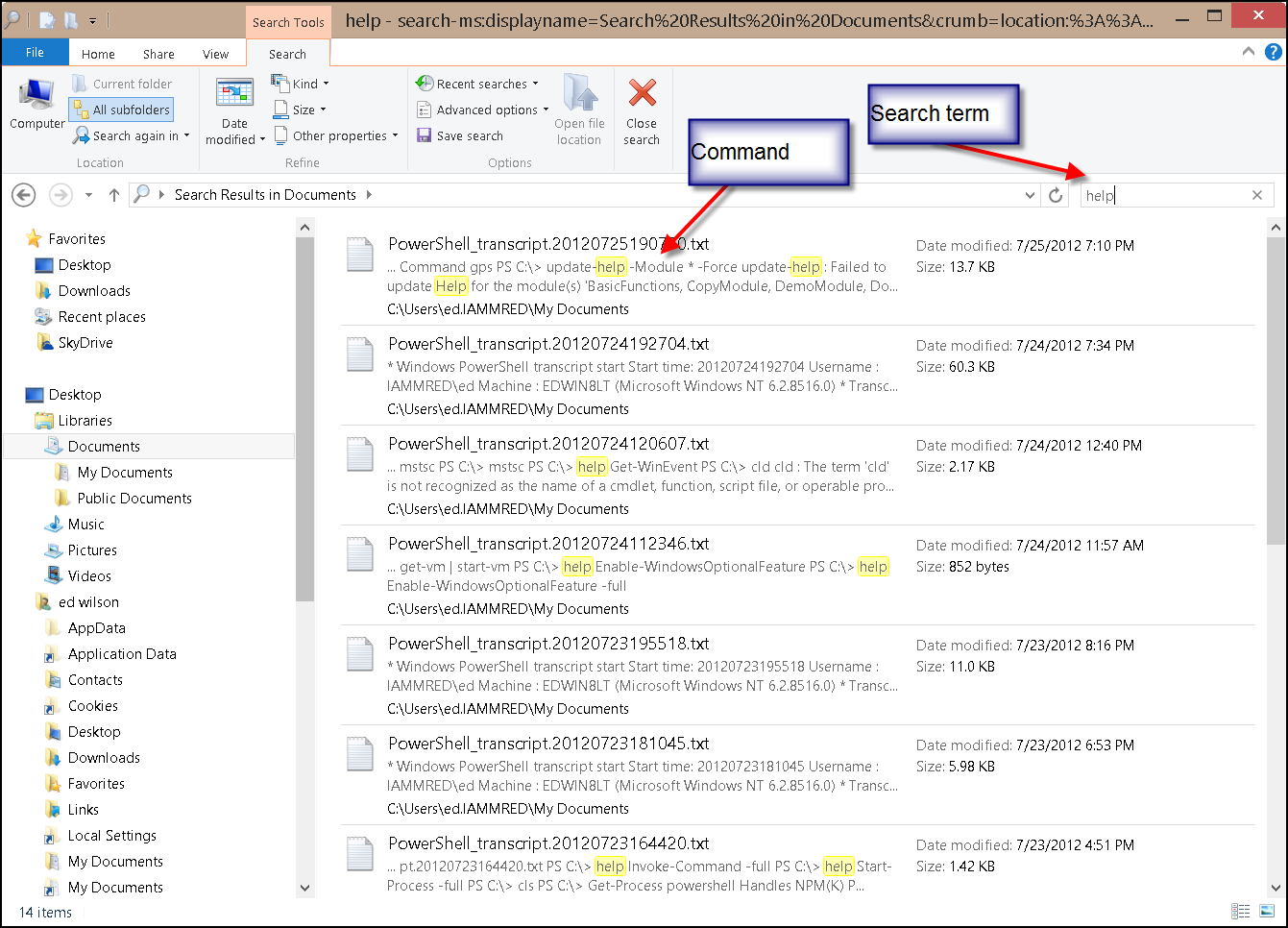 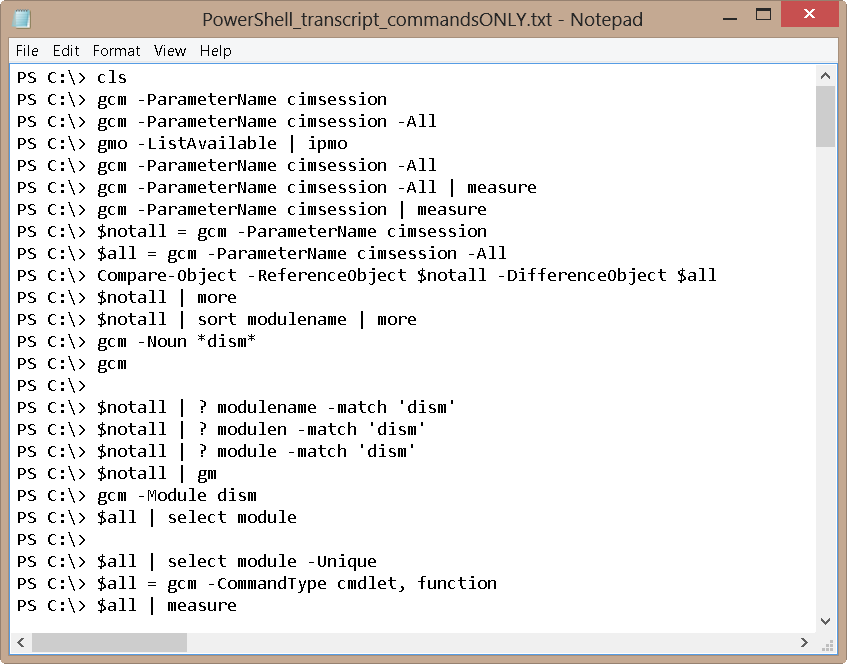 I uploaded it to the Scripting Guys Script Repository: Pull PowerShell commands from transcript file.