Microsoft Scripting Guy Ed Wilson here, the hotel we are using this weekend has free wireless access points setup throughout the facility. I decided to take my laptop with me as I headed downstairs to get some breakfast. The horse show does not begin until 10:00 A.M., and that gives me some time to catch up on email sent to scripter@microsoft.com.

Normally, I like to use the Weekend Scripter articles to do things that are more fun and interesting (I mean, after all it is the weekend for a large portion of the world). However, because the script I had intended to write did not work on my Windows 7 laptop, I felt like I needed to get something done before we head out to the horse show. I can only push my luck so far by taking my laptop to the show…

What did not work, you may ask? Well I had an idea about using another undocumented WMI class to get wireless signal strength. The WMI class MSNdis_80211_ReceivedSignalStrength is seen in the following image. 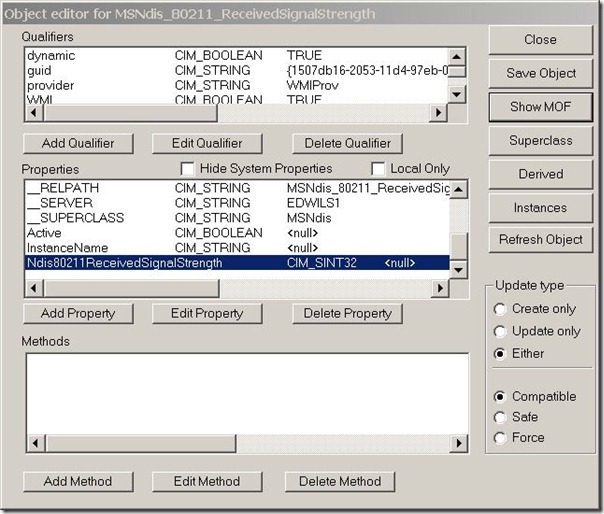 To use this WMI class in a Windows PowerShell script, use the Get-WmiObject cmdlet as shown here:

The problem, as you can plainly see is that no information is returned…at least not on my 64 bit Windows 7 laptop. That is one of the problems with using undocumented WMI classes, one never knows if they will work or not.

Well, because my ideas for a really cool Weekend Scripter article were blown out of the water, I decided to open up Scripter and I came across a rather interesting email … admittedly it is not as cool as picking up your wireless signal strength via a script, but it may be a bit more useful. Here is the question … oh wait, the question is in Portuguese, and while that would be fine for my friends in Portugal, Brazil and Macau, it won’t work too well for my friends in the USA. So basically, what NG is asking is how he can use Windows PowerShell to perform mathematical calculations.

Here is my answer to him.

Windows PowerShell is designed for use by network administrators, and others who wish to work with computers. At its heart, it is an automation language that enables one to perform easy tasks such as shutting down computers, pinging computers, and starting and stopping services. Many of our network applications are using Windows PowerShell for their automation solution. This includes applications such as SharePoint server, Exchange Server, SQL Server, Internet Information Server, Active Directory Domain Services, and others.

This having been said, Windows PowerShell is a .NET Framework based application, and as a result has full support for the .NET Framework. From a mathematical perspective, you would do well to review the members of the system.math .NET Framework class. Here is a link to documentation on that class: http://msdn.microsoft.com/en-us/library/system.math.aspx All of these members are static, which means they can be used directly from within Windows PowerShell. Here is an example of using the TAN static method to return the tangent of a 45-degree angle:

Note that I place system.math inside square brackets, and then use the double colon after that. The square brackets allow me to refer to the .NET Framework class directly without having to create an instance of it. The double colon is used to call the static method. Because Windows PowerShell assumes the system namespace, you do not need to type it if you do not wish. The decision as to whether to include it or not, will remain with you – do you remember that the math class is found in the system namespace? In general I have a tendency to forget these types of things, and therefore I tend to use the full name. You can use the static TAN method from the system.math .NET Framework class by leaving out the word system. This is shown here:

Using the other static methods is just as easy. For example, if you need to know the cosign of a 90 degree angle, use the COS method. This is shown here:

As a “computer” person, I like the ability to use the Pow method. This will give me a number raised to a certain power. For example, if I need to work with binary numbers … powers of two, I can do so like this:

I can even write a script to display binary numbers. If I need to work with subnet masks, the script shown here can be used:

I could do the same thing with base 8 and base 16 if I needed to do so. NG, that is all there is to working with methods from the system.math .NET Framework class. You do not have to use MSDN to look up the class. If you have an idea about what a method might do, you can use the Get-Member cmdlet to retrieve the static methods, as shown here:

You use the same methodology to access static properties:

You can even create a function to give you the circumference of a circle if you wish. This is shown here:

NG, that is all there is to working with static properties from the system.math class. I also see my significant other standing by the door swinging the camera around like a whirligig so I should put my laptop to sleep and get ready to boogie. The cool thing is she has not given me time to put my laptop up; therefore, I will have to take it with me to the horse show—yes!

We invite you to join us tomorrow when we will begin talking about date manipulation. We would love for you to follow us on Twitter or Facebook. If you have any questions, send email to us at scripter@microsoft.com, or post them on the Official Scripting Guys Forum. See you tomorrow. Until then, peace.

ScriptingGuy1
August 2, 2010
0 comment
TechEd Trip Reports from 2010 Scripting Games Winners, Glenn and Boe
It seems like only yesterday that we were meeting Glenn Sizemore and Boe Prox at Tech·Ed 2010 North America in New Orleans. What? It was more than six weeks ago? ...