Hey, Scripting Guy! I have a number of commands that I want to run against several remote servers. The commands include stuff that must happen prior to something else happening. But then, there are also some things that I would like to happen as fast as possible. Is this permissible? If so, do I have to write two different workflows?

Microsoft Scripting Guy, Ed Wilson, is here. This afternoon I am sipping an awesome cup of Oolong tea with a cinnamon stick, jasmine flower, and lemon grass. The flavor is just about perfect. In the background, I am listening to Ravel. Outside, the sky is dark and it is raining. The thunder seems to punctuate the music.

Note  This is the last post in a five-part series about Windows PowerShell Workflow for “mere mortals.” Before you read this post, please read:

Well TB, the good news is that you do not need to write two different workflows to enable parallel processing and sequential processing. Windows PowerShell Workflows are flexible enough to handle both in the same workflow.

Adding a sequence activity to a workflow

To add a sequence activity to a Windows PowerShell Workflow, all I need to do is use the Sequence keyword and specify a script block. When I do this, it causes the commands in the sequence script block to run sequentially and in the specified order.

To run my workflow, I first run the PS1 script that contains the workflow. Next, I call the workflow and I pass two computer names to it via the PSComputerName automatic parameter. Here is my command:

The image that follows shows the Windows PowerShell ISE where I call the workflow. It also illustrates the order in which the commands ran this time. Note that the commands in the Sequence script block ran in the specified order—that is, Get-Date executed before $PsVersionTable.PSVersion. Also notice that they were in the same Parallel stream of execution. 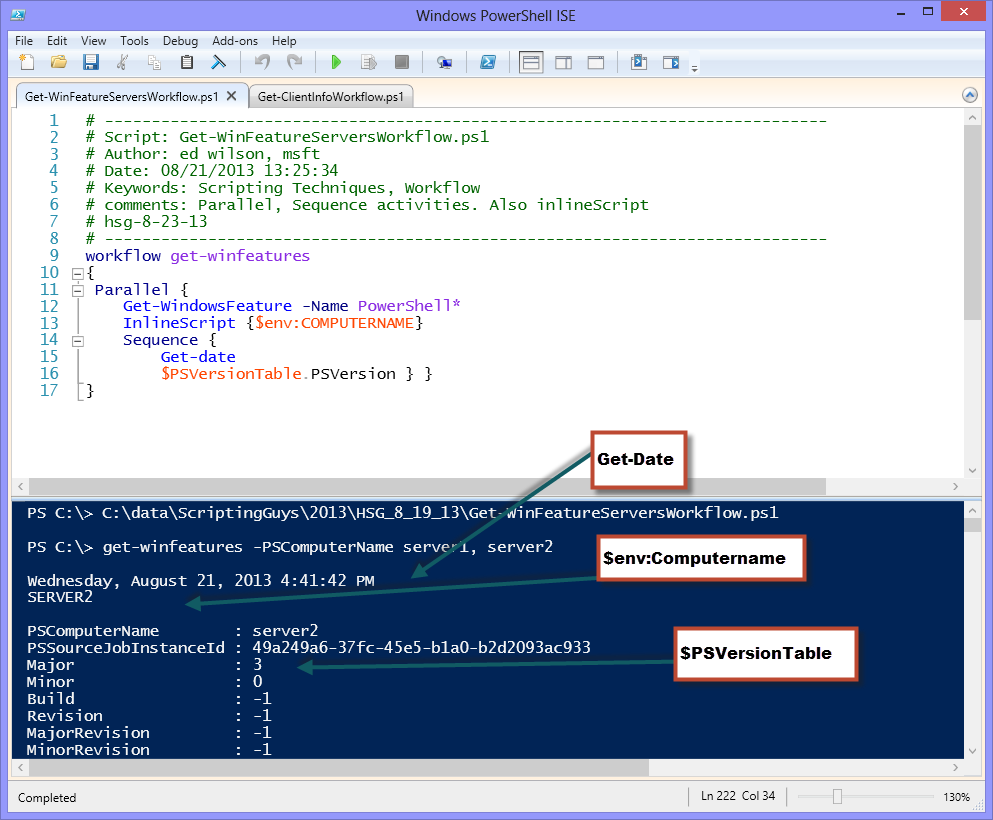 One of the cool things about this workflow, is that I ran it from my laptop running Windows 8. What is so cool about that? Well, the Get-WindowsFeature cmdlet does not work on desktop operating systems. Therefore, I ran a command from my laptop—a command which does not exist on my laptop, but it does exist on the target computers, Server1 and Server2.