Hey, Scripting Guy! I have been reading your articles for several years, but I have never been compelled to write until today. I was reading an old article about putting all the Windows PowerShell cmdlet aliases into a hash table, and suddenly it dawned on me I do not know what a hash table really is. I did a search, using Bing for hash table, and I can tell you I got all kinds of really weird stuff coming back for results. Then it dawned on me, I would try to use help. Well, I typed help hash-table and believe it or not, an article about Get-WinEvent opened. As you can imagine I was becoming frustrated and decided to go right to the horse’s mouth so to speak, and ask the Scripting Guys. So I guess my question is, “What in the world is a hash table?” I eagerly await your exalted pearls of wisdom and remain your faithful reader.

Microsoft Scripting Guy Ed Wilson here. It is the Fourth of July in Charlotte, North Carolina, in the United States. The sun is shining, and the humidity is rising. The Scripting Wife and I are planning on watching a fireworks celebration later this evening, but we will probably do so from the comfort of our air-conditioned house. We are lucky in that we can generally see fireworks that are launched from the nearby lake front. We do not get to see them as they immediately leave the ground, but for most of their trek skyward, we can watch. Of course, the resulting plumage is very visible. The tradeoff for missing a few seconds of the fireworks is we miss all the traffic, congestion, heat, and mosquito bites. I think it is an even trade (and the Scripting Wife seems to agree). Anyway, as I mentioned yesterday, the Scripting Wife and I are more accidental fireworks watchers.

BW, I was really curious when you said you typed help hash-table and got back an article about Get-WinEvent. The reason is because you have accidently run across a feature of the Get-Help cmdlet. I know what you are thinking: “Microsoft always says that is not a bug, but is a feature.” In this case, I am telling the truth, and the feature is actually documented in the Help files. If you type get-help get-help and look in the Description portion of the results, you will see that the Get-Help cmdlet does more than simply match cmdlet names. There are actually rules that govern this behavior. The rules are listed here:

This means that if you want to find a listing of Windows PowerShell cmdlets that include the computername parameter, you can easily find them by typing Get-Help computername. Pretty cool, huh?

BW, a hash table is a data structure that is used to temporarily store data. The data structure is made up of a series of unique keys and their associated values. In this way, you could think of a hash table as a Microsoft Excel spreadsheet that is made up of two columns. The first column includes a certain number of rows. The contents of the cells that make up the first column are unique within that column. The second column is made up of the same number of rows, but the items in the cells do not need to be unique. This is illustrated in the following figure. 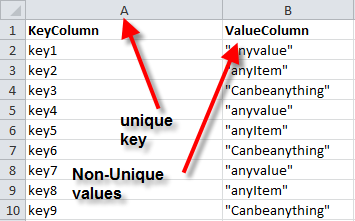 BW, now that you have a hash table stored in the $hash variable, pipe it to the Get-Member cmdlet so that the members of the object are displayed on the Windows PowerShell console. This technique follows along with its accompanying output.

From the above output, an add method appears with the following signature (definition).

This tells me that the add method takes two values. The first value is a key, and the second one is a value. Both of these input values are objects. The following code illustrates adding an additional key/value pair to the hash table stored in the $hash variable. The first line of code adds the new key/value pair to the hash table. The second line of code displays the contents of the hash table. One thing to keep in mind is that when the hash table was first created, the equality operator was used with the syntax of key=value. But when calling the add method, a comma is used to separate the two values. The code and the accompanying output are shown here:

The following code illustrates removing the secondkey and its accompanying value from the hash table stored in the $hash variable. The second line of code displays the contents of the hash table.

BW, that should help you start using hash tables in your scripts. Hash Table Week will continue tomorrow when I will talk about creating a hash table on the fly inside a script.

Doctor Scripto
July 5, 2011
0 comment
Use a PowerShell Hash Table to Simplify File Backups
Summary: Learn how to use a Windows PowerShell hash table to simplify backing up unique files.   Hey, Scripting Guy! Your series on hash tables has been pretty ...