Microsoft Scripting Guy, Ed Wilson, is here. In all the hubbub about all the great features introduced in Windows PowerShell 3.0, one (actually more than one) feature was somewhat overlooked. With Windows PowerShell 3.0 bringing features such as workflow, PowerShell Web Access, support for disconnected sessions, CIM cmdlets, updatable Help, module auto loading, and improved Windows PowerShell ISE, it was really understandable that the scheduled job feature was simply overlooked by nearly everyone. This is not because the feature is bad—it is just that all the other way cool stuff left little room on the plate of the average IT pro.

In addition to the generic *job cmdlets, Windows PowerShell 3.0 introduces a PSScheduledJob module that contains the following 16 cmdlets:

So, how does it work (or step-by-step)

I create a trigger, but when I try to register the scheduled job, if I have not opened Windows PowerShell with admin rights, the following error message appears:

To launch with admin rights, right-click the Windows PowerShell icon and click Run as Administrator. The menu is shown in the following image: 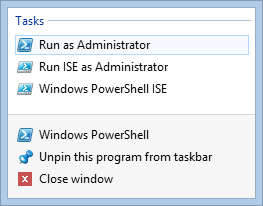 After I open the Windows PowerShell console with admin rights, I create the trigger, and I register the scheduled job. The script to do this is:

This time, the command returns a ScheduledJobDefinition object. This object contains the name of the scheduled job, the job trigger, job ID, and the command itself. The command and the returned object are shown in the following image:

I can now use the Get-ScheduledJob cmdlet to check the status of the scheduled job as shown here:

If I want to see what job options were used when creating the scheduled job, I use the Get-ScheduledJobOption cmdlet. This command and associated output are shown here:

To see if the job ran, I use the Get-Job cmdlet as shown here:

I see there are two jobs that completed. So I look at the first job. Notice that this number is a different ID number than the one I received from Get-ScheduledJob: 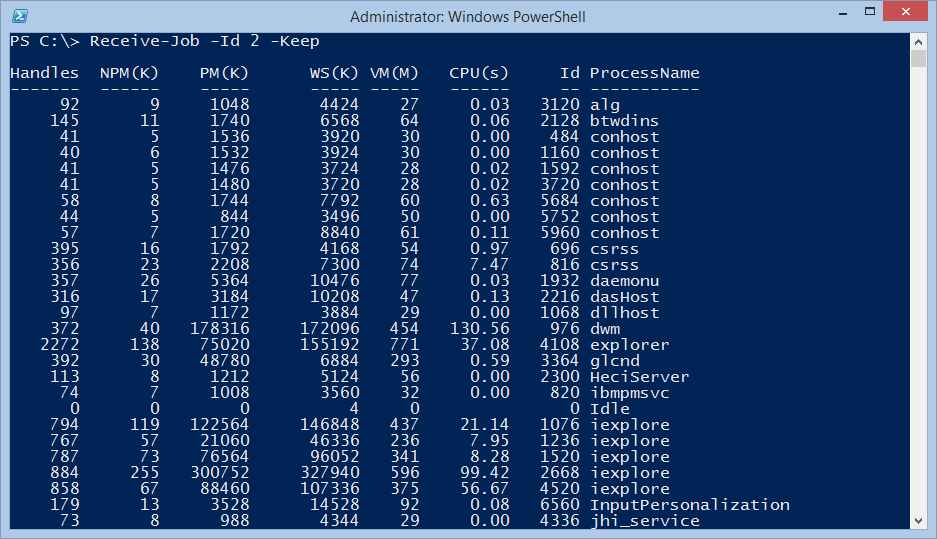 That is all there is to playing around with Windows PowerShell scheduled jobs. Scheduled Job Week will continue tomorrow when I will talk about more cool stuff.

Doctor Scripto
May 12, 2014
0 comment
The Scripting Guys Booth at Tech Ed 2014–Morning of Day One
Summary: Microsoft Scripting Guy, Ed Wilson, talks about the Scripting Guys booth on the first morning of TechEd 2014. Wow! It is 2:00 in the afternoon, Houston time, and...