One of the great things about being at Ignite in Chicago is the opportunity to talk to so many people. I mean, with 23,000 attendees, most of whom it seems stopped by the Scripting Guys booth, the conversations are varied, and at times, downright inspirational.

I had one person who was from Nigeria stop by to say “thank you.” Of, course, I should have, and I did, say thank you right back. Anyway, he said he began reading the Hey, Scripting Guy! Blog several years ago, and he taught himself Windows PowerShell. Based on his skills with Windows PowerShell, he was able to land himself a new job, and that changed his life.

Another lady stopped by yesterday. When I introduced myself, she screamed. Literally screamed. Everyone in the booth turned around, and she shouted out, "Thank you, thank you, thank you." She went on to say, that she owed her last two promotions and pay raises to me because she has used my content so many times to solve problems at work that her boss now believes she is a genius. I mean, these are her words, not mine. It was way cool—my first “Justin Bieber” moment.

I have been thanking people for reading the blog, and for sharing their success stories with me. It is what makes this Windows PowerShell community so cool, and what makes Windows PowerShell such an awesome product. I mean, it helps change peoples lives. I could actually go on with several other stories, but I will save them for later. I really am lucky to have the most awesome job, to work for the most awesome company, and to work with such an awesome product group.

Yesterday, a person stopped by when Jeffrey Snover was at our booth. He had a problem he wanted to share, and I suggested that he show it to Jeffrey. So here he was, with Jeffrey Snover and a whole crew looking on as he shared his problem. It was (for want of a better word) awesome! Maybe even bodacious. Luckily, I was able to capture the moment with my handy Windows 8.1 phone:

Oh, wait. I got things out of order just a bit. I was just so excited about all the cool things that happened yesterday. Let take a step back…

The MVP team put together a way cool display at their booth. It listed a number of MVP names on their wall. Teresa Wilson, Windows PowerShell MVP (aka the Scripting Wife), wanted to show me that her name was on the wall. Here she is:

Then we were walking past the Microsoft Training and Certification team booth—and look! They had a way cool book about Windows PowerShell. It was my PowerShell Best Practices book, so Teresa was happy to return the favor and snap a picture of me with my book. 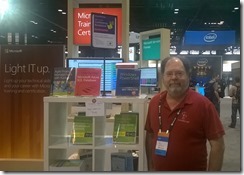 Because Teresa is a MVP, she got invited to the MVP party. Luckily, I was able to tag along as the +1 portion of the invitation. While we were, we got to see our friends from the Danish PowerShell User Group and the Swedish PowerShell User Group. Luckily, Teresa and I have been able to speak to both of those user groups in person. I am looking forward to going back there to speak again.

Teresa met up with a couple of suspicious characters while she was at the Expo Hall: 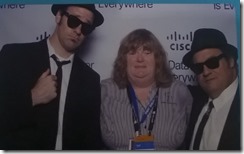 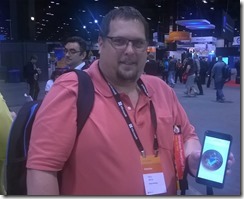 One thing that is great about coming to a conference like Ignite is all the great ideas one gets. I have found my next vehicle. It is an Xbox car, and it looks perfect for tailgate parties.

Stay tuned for more from Ignite!