Clean Up Your PowerShell History to Remove Error Entries

Microsoft Scripting Guy, Ed Wilson, is here. One of the great things about being involved with a Windows PowerShell user group is all the great people I meet and all the cool ideas that arise. It seems that every time I attend a Windows PowerShell user group meeting, I come away with at least one idea for a Hey, Scripting Guy! Blog post. (The Charlotte PowerShell User Group meets on the first Thursday of the month at the Microsoft office in Charlotte, North Carolina, in the United States.) Double Note   Tonight, February 11, 2013, at 6:00 P.M. in New York City is the NYC Windows PowerShell User Group meeting. They will be sharing their favorite Windows PowerShell tips and tricks, and I will publish them on the Hey, Scripting Guy! Blog. This will be cool. If you are anywhere near the Sixth Avenue Microsoft office, you should check it out. You can register (for free) via the link above.

Anyway, Microsoft PowerShell MVP Jim Christopher (the Charlotte Windows PowerShell user group president) created a lab using a way cool SQLite provider he wrote. This turned into a great hands-on lab for working with providers. During the course of the wrap up and summary, I suggested we look though the $error object and commented on the fact that if you pipe the object to Format-List * and use the –FORCE parameter, additional details appear.

An example of this technique is shown using $error[0], which is always the most recent error generated.

The command and its associated output are shown in the following figure. 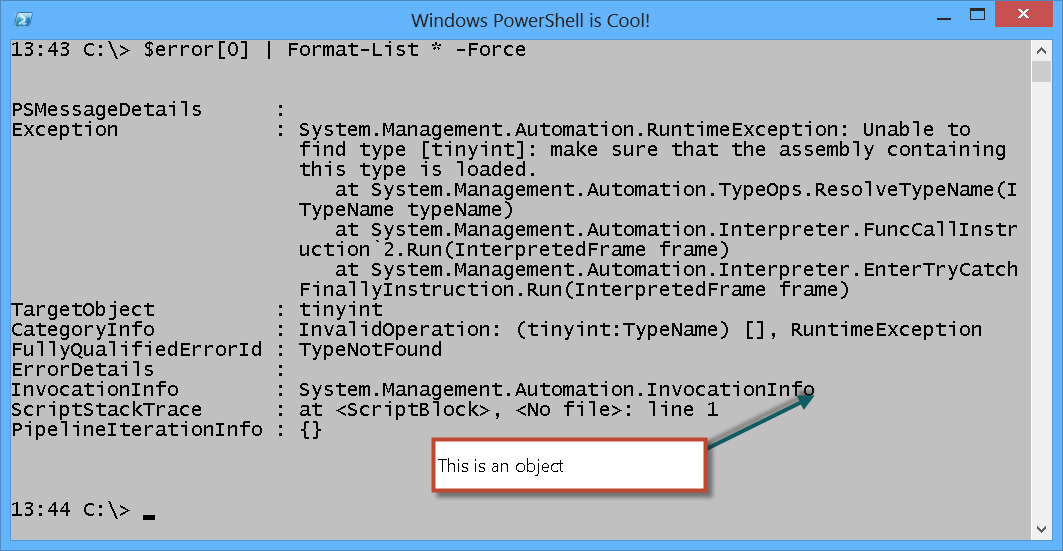 So, the InvocationInfo property contains an object. I can access the object directly, as shown here. 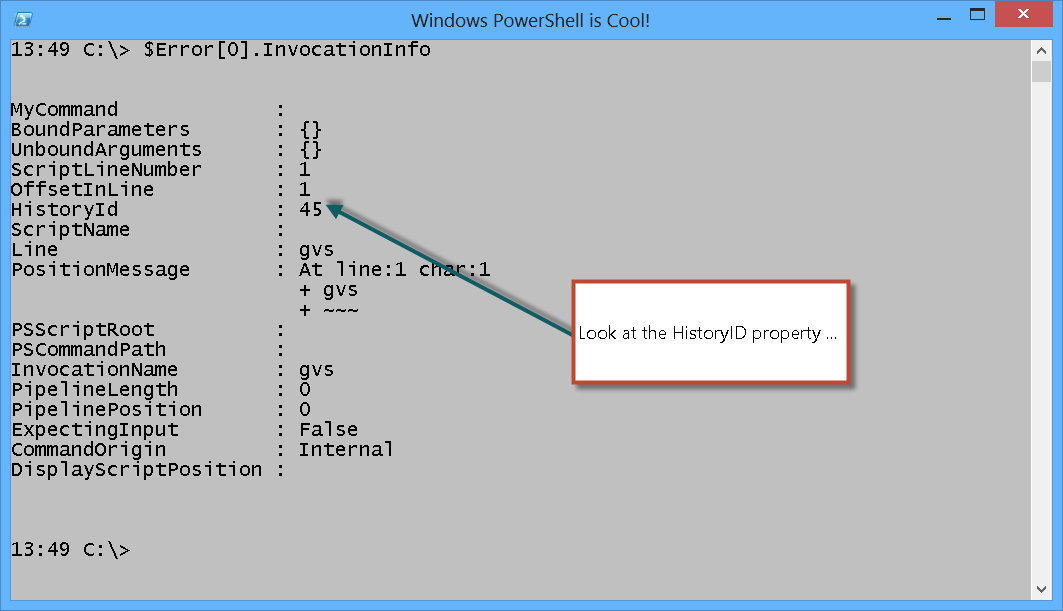 Now, if I use the Get-History cmdlet to display my command history, I can immediately see several errors are retained in my history. This makes it a real pain when I am using the Up Arrow key through a series of commands. The Get-History command and the associated output are shown here. 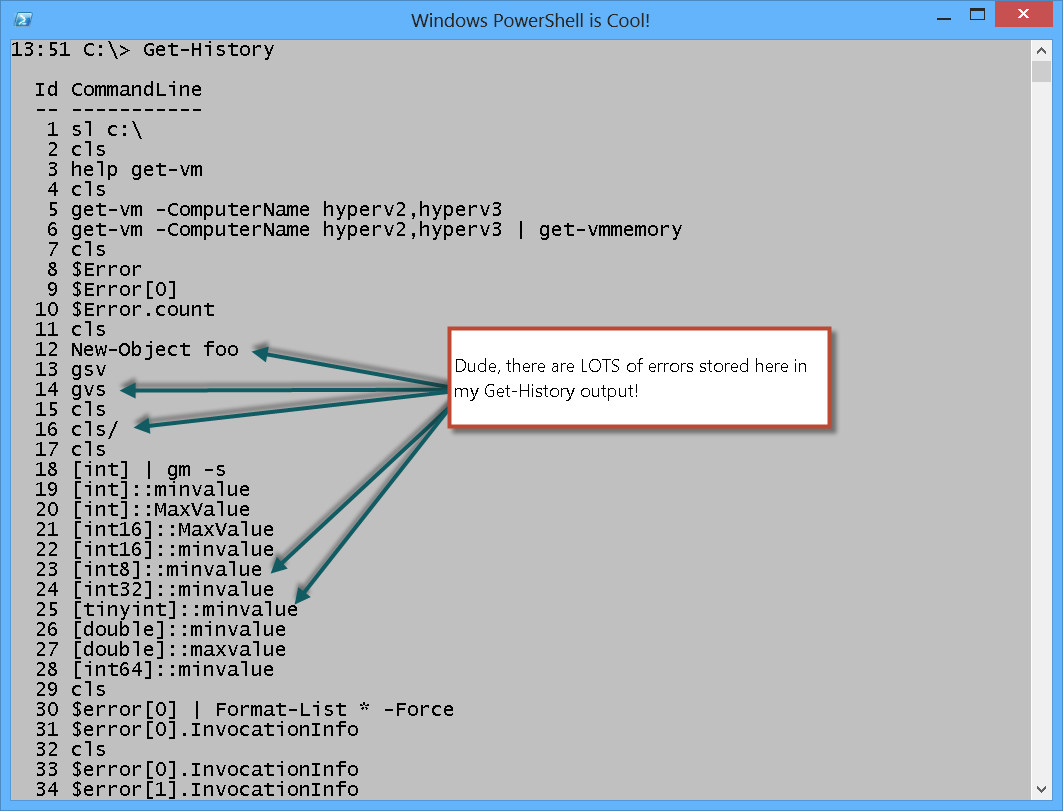 Ok, now I clear the history entries that have errors

Once I find those, I pipe the history IDs once again to a Foreach-Object cmdlet (still using % as an alias). Inside the Foreach-Object cmdlet, I use the Clear-History cmdlet to remove the error-inducing commands from my history stack. The complete command is shown here.

Now when I check my command history, I see that that most of the offending commands were successfully removed from the history. This is shown in the following image. 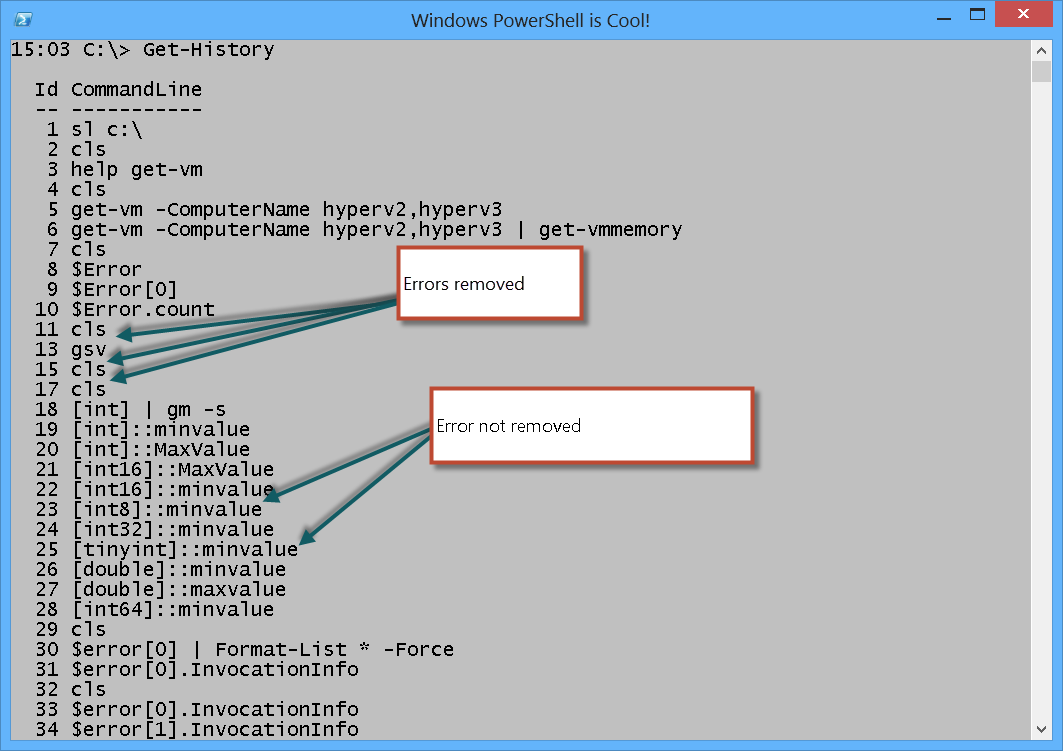 But, some of the errors—those related to calling a static method on a non-existent type—did not get deleted. The reason is that those types of errors do not write the proper history index—instead they show up with a -1 for the HistoryID, as shown here.

Still, this is pretty useful, and I would not have even come up with the idea if I had not attended the Windows PowerShell user group meeting the other night in Charlotte. In fact, I am thinking about putting this into a function called Remove-BadHistoryEntry and placing it in my profile. In fact, I just wrote the Remove-BadHistoryEntry function and uploaded it to the Scripting Guys Script Repository. Check it out. It is cool.

Join me tomorrow when I will talk about more way cool Windows PowerShell stuff.