Today, we are announcing .NET Core 3.0 Preview 3. We would like to update you on the .NET Core 3.0 schedule and introduce you to improvements in .NET Core SDK installers, Docker containers, Range, and Index. We also have updates on the Windows Desktop and Entity Framework projects.

Download and get started with .NET Core 3 Preview 3 right now on Windows, macOS and Linux.

You can see complete details of the release in the .NET Core 3 Preview 3 release notes.

You need to enable Use previews of the .NET Core SDK to use .NET Core 3.0 with Visual Studio 2019, as described in .NET Core tooling update.

A new preview C# extension update is available for VS Code that includes the latest C# compiler (aligned with .NET Core Preview 3 and Visual Studio 2019 Preview 4), which is required to use new C# 8.0 syntax. You need to download the extension and then install it as a VSIX in VS Code (VSIX install is in Extensions settings).

We recently published an update on Floating-Point Parsing and Formatting improvements in .NET Core 3.0. Please check out that post in you use floating APIs and associated mathematical operations.

We’re tracking to shipping .NET Core 3.0 preview releases every month. By coincidence,the previews now align with the months. We’re releasing Preview 3 today and we’re in the third month. We hope to continue that pattern until the final release.

For Windows, the .NET Core SDK MSI installers will start upgrading patch versions in place. This will reduce the number of SDKs that are installed on both developer and production machines.

This approach aligns with the behavior of global.json, which allows roll forward across patch versions, but not feature bands of the SDK. Thus, upgrading via the SDK installer will not result in errors due to a missing SDK. Feature bands also align with side by side Visual Studio installations for those users that install SDKs for Visual Studio use.

We would like feedback on the approach we’ve taken for upgrading the .NET Core SDK in place. We considered a few different policies and chose this one because it is the most conservative. We’d also like to hear if it is important to build similar experience on macOS. For Linux, we use package managers, which have an existing upgrade-in-place behavior.

For more information, please check out:

Many developers are packaging and running their application with containers. A key scenario is limiting a container’s resources such as CPU or memory. We implemented support for memory limits back in 2017. Unfortunately, we found that the implementation isn’t aggressive enough to reliably stay under the configured limits and applications are still being OOM killed when memory limits are set (particular <500MB). We are fixing that in .NET Core 3.0. Note that this scenario only applies if memory limits are set.

The Docker resource limits feature is built on top of cgroups, which a Linux kernel feature. From a runtime perspective, we need to target cgroup primitives.

Mid-way through 2018, we started testing applications with memory limits set below 100MB. The results were not great. This effort was based on enabling .NET Core to run well in containers in IoT scenarios. More recently, we published a design and implementation to satisfy both server/cloud and IoT memory limits cases.

We concluded that the primary fix is to set a GC heap maximum significantly lower than the overall memory limit as a default behavior. In retrospect, this choice seems like an obvious requirement of our implementation. We also found that Java has taken a similar approach, introduced in Java 9 and updated in Java 10.

The GC change is the most critical part of our memory limits solution. It is also important to update BCL APIs to honor cgroup settings. Those changes are not included in Preview 3 but will come later. We’d appreciate feedback on which BCL APIs are most important to update first (another example).

Our focus in Preview 3 has been about making Docker limits work well for Linux containers. We’re do the same for Windows containers in upcoming previews.

Microsoft teams are now publishing container images to the Microsoft Container Registry (MCR). There are two primary reasons for this change:

On the .NET team, we are now publishing all .NET Core images to MCR. We switched the .NET Core Nightly product repo to MCR 2-3 weeks ago. The .NET Core product repo has now been moved to publishing to MCR as well, and includes .NET Core 3.0 Preview 3. As you can see from these links (if you click on them), we continue to have “home pages” on Docker Hub. We intend for that to continue indefinitely. MCR does not offer such pages, but relies of public registries, like Docker Hub, to provide users with image-related information.

The links to our old repos, such as microsoft/dotnet and microsoft/dotnet-nightly now forward to the new locations. The images that existed at those locations still exists and will not be deleted.

We will continue servicing the floating tags in the old repos for the supported life of the various .NET Core versions. For example, 2.1-sdk, 2.2-runtime, and latest are examples of floating tags that will be serviced. A three-part version tag like 2.1.2-sdk will not be serviced, which was already the case.

We have deleted the 3.0 images in the old repos. We will only be supporting .NET Core 3.0 images in MCR and want to make sure that everyone realizes that MCR is the correct place to pull those images, and transitions to using MCR immediately.

For example, the correct tag string to pull the 3.0 SDK image now looks like the following:

The new MCR string will be used with both docker pull and in Dockerfile FROM statements.

Index and Range types were introduced in Preview 1 to support the new C# 8.0 compiler index and range syntax (e.g. array[^10] and array[3..10]). We have polished these types for Preview 3 and added some more APIs to enable using Index and Range with some other types (e.g. String, [Readonly]Span<T>, [Readonly]Memory<T> and Array).

These changes enable the following syntax and scenarios:

This is the first preview that has support for authoring .NET Standard 2.1 libraries. By default, dotnet new classlib continues to create .NET Standard 2.0 libraries as we believe it gives you a better compromise between platform support and feature set. For example, .NET Standard 2.1 won’t be supported by .NET Framework.

In order to target .NET Standard 2.1, you’ll have to edit your project file and change the TargetFramework property to netstandard2.1:

For more details on all the API additions and platform support, check out .NET Standard version table on GitHub.

We added the following for F# in Preview 3.

Has basic colorization of F# types (thanks to Saul Rennison): 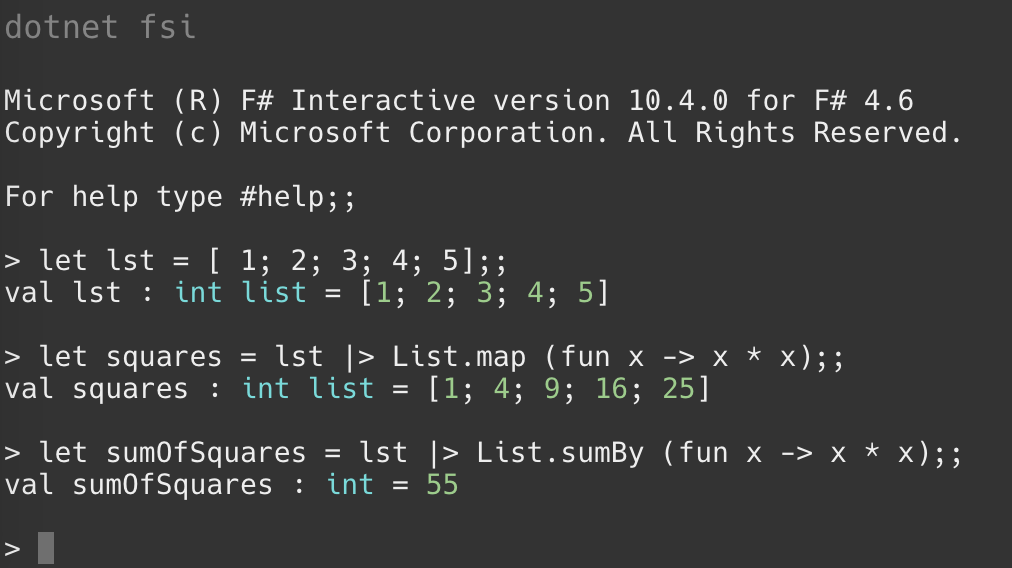 AssemblyDependencyResolver is a key component of dynamically loading assemblies.  Given .NET Core’s binder does not do simple probing like ‘next to the assembly’. We added a mechanism to read a deps or flat directory at runtime and resolve assemblies.

So in the past, doing an AssemblyLoadContext.LoadAssemblyFromPath(“…”), would fail to find dependent assemblies.  But using the following works as expected with .NET Core 3.0:

See examples of this API in use.

We provided callbacks on P/Invoke module load to allow for replacement at runtime. This is similar to what is available with the Mono runtime. This feature an application to dynamically target Windows and Linux without having to do #if and rebuild. See the following usage pattern:

We added symmetric native library resolution APIs when modules are not found.   Previously this was not possible in the default load context, and required inheriting from a class and overriding a protected method.

We are in the process of adding samples for these new capabilities.

We are continuing to make progress on the WPF and WinForms projects. We are still working on transitioning these code bases from a proprietary build system to an open source one, based on dotnet/arcade. We are coming to the tail end of this phase of the project and then expect that remaining parts of the WPF code base will be published afterwards, likely after Preview 4.

As technology progresses, more varied display monitors are avaiable for purchase. Dots-per-inch (DPI), that used to always be 96 DPI, is no longer a constant value. With that comes a need to be able to set different DPI modes for desktop applications.

The SetHighDpiMode method will set the corresponding High DPI mode unless the setting has been set by other means like App.Manifest or P/Invoke before Application.Run.

The possible HighDPIMode values, as expressed by the HighDpiMode enum are:

In the first 3 previews, the EF team has prioritized API and behavior changes that could cause existing applications to break when upgrading from previous versions. These changes are themselves designed to improve EF Core or to unblock further improvements. But it also means that many other changes, including sought-after new features planned for EF Core 3.0, together with the porting of EF6 to .NET Core, haven’t been completed yet.

Implementing architectural changes early in the release helps us maximize the opportunities to collect customer feedback, understand any unintended impact of the changes, and react accordingly.

You can expect to see more detailed announcements in this blog, as we make progress in the delivery of new features in upcoming previews.

In the meantime, you can visit What’s new in EF Core 3.0 in the product documentation to find more information about the new features planned for 3.0 as well as a detailed description of the breaking changes included so far.

Take a look at the .NET Core 3.0 Preview 1 and Preview 2 posts if you missed those. With this post, they describe the complete set of new capabilities that have been added so far with the .NET Core 3.0 release.