I posted about Using .NET and Docker Together last year. With DockerCon 2018 being this week, it seemed like a great time to give you an update.  Since my last post, we’ve enabled a set of Docker workflows with guidance and samples for .NET Core and .NET Framework, for development, CI/CD, and production. We also offer many more images for both Windows and Linux. If you haven’t taken a look at Docker and .NET recently, now is a good time.

Docker and containers come up more and more in conversations that we have with .NET developers. It has become the way to deploy server applications for many people, due to its primary benefits of consistency and a light-weight alternative to virtual machines. In the DockerCon keynote, there were multiple .NET demos showing how you can use Docker for modern applications and for older applications that use traditional architectures. It has become a lot easier to containerize .NET applications using tools from both Microsoft and Docker.

We maintain samples repositories for both .NET Core and .NET Framework. With just a few commands at the command line, you can test out Docker with these sample images.

The easiest (and supported on the most operating systems) is the .NET Core console app sample. All you need to do is type the following command:

There are other samples you can try, both console and ASP.NET:

How to Approach using Docker

Docker is flexible, enabling you to use it in lots of different ways. There are three major scenarios to consider when looking at adopting Docker:

You can adopt Docker for all of these roles or just a subset. From what we’ve seen, most developers start with the production scenario and then adopt more of Docker in their build infrastructure as they find it useful. This approach makes sense, since the choice to use Docker is usually centered around using it to run applications.

On the .NET Team, we’ve been making heavy use of Docker for both building code and testing. The value of a high-fidelity and instant-on computing environment is super high. There is no need to put off a product investigation on Debian, for example, when you can boot up the exact right environment in seconds.

The following sections show a mixture of .NET Core and .NET Framework examples for these three scenarios.

The primary requirement for running Docker in production is containerizing your application. The simplest way to create an image within existing build infrastructure is to copy build artifacts into an image. The primary value with this model is consistency between environments, like staging and production.

The following Dockerfile copies build assets from the current directory into a new image that is based on the .NET Core Runtime image on Docker Hub.

The following command creates a new image, called app using the Dockerfile above, assuming the command is run from the directory where the Dockerfile and app.dll are located:

The following command creates a running container based on the app image:

Note: The --rm argument removes the container after it terminates. Preserving containers is only useful when you want to investigate why they behaved a certain (undesired) way.

Docker makes it easy to build source for an application and produce a container image in one step. This is called multi-stage build. The value of building source within a container follows:

The second section, above, is an example where Docker shines. Each command in Docker creates a distinct layer in your Docker image. If Docker finds that all the inputs for a given layer are unchanged, then it doesn’t rebuild that layer for subsequent invocations of docker build. The second section copies msbuild assets, like project files, and then runs nuget restore. If the msbuild assets have not changed, then the RUN line that performs restore is skipped. That ends up being a large time savings. It also explains why the Dockerfile is written the way it is.

The following command creates a new image, called aspnetapp using the Dockerfile above, assuming the command is run from the directory where the Dockerfile and the source are located:

The following command creates a container based on the aspnetapp image:

See the following examples for more detail on building source with Docker:

The testing scenario showcases the value of Docker since testing is more valuable when the test environment has high fidelity with target environments. Imagine you support your application on multiple operating systems or operating system versions. You can test your application in each of them within Docker. It is easy to do and incredibly valuable.

Up until now in this post, you’ve seen Dockerfile files with RUN commands that described required logic that is executed with docker build and the final result executed with docker run. Running tests via docker build is useful as a means of getting early feedback, primarily with pass/fail results printed to the console/terminal. This model works OK for testing but doesn’t scale well for two reasons:

The following Dockerfile in its normal use is similar to the Dockerfile for .NET Framework that you saw above. This one, however, includes something of a trick to enable testing. It includes a testrunner stage that is normally very close to a no-op, but that is very useful for testing.

For testing, build an image to the testrunner stage, which will include all the content that has been built to that point. The resulting image is based on the .NET Core SDK image, which includes all of the .NET Core testing infrastructure. The trick in this Dockerfile is that the testrunner stage presents an alternative ENTRYPOINT, which calls dotnet test to kick off testing. If you run the Dockerfile all the way through (not targeting a specific stage), then this first ENTRYPOINT is replaced by the last one, which is the ENTRYPOINT for the application.

The following command creates a new image, called dotnetapp:test, using the Dockerfile above and building only to and including the testrunner stage, assuming the command is run from the directory where the Dockerfile and the source are located:

In order to collect test logs on your local machine, you need to use volume mounting. In short, you can project a directory on your machine into the container as the same directory. Volume mounting is a great way to get content in or out of a container.

The following command creates a container based on the dotnetapp:test image. It volume mounts the C:appTestResults local directory into the /app/tests/TestResults in the app. The local directory must exist already and the C drive must be shared to Docker.

After running the command, you should see a .trx file in the C:appTestResults file.

The Running .NET Core Unit Tests with Docker shows you how to test in a container with more detail. It includes instructions for Windows, macOS, and Linux. It also includes a script that manages the testing workflow described in this section.

Developing in a Container

The scenarios above are focused on producing or validating a container image. The use of Docker can be moved further upstream to development.

Visual Studio enables development in a container. You can add a Dockerfile to a .NET project, with either Windows or Linux containers. The experience is nearly seamless. It is hard to tell that you are using Docker at all, as you can see in the following image. 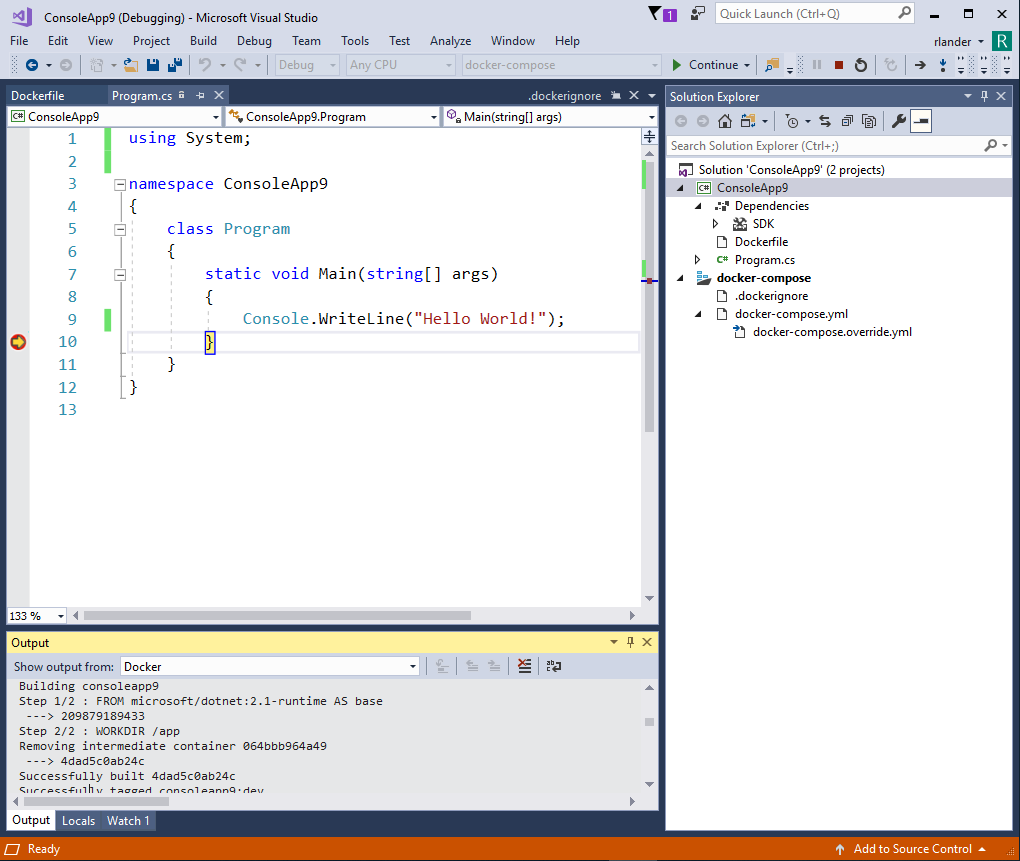 You can also develop in a container at the command line. The .NET Core SDK image includes a lot of functionality that you can use without bothering with creating a Dockerfile. In fact, you can run, build, or test your application only using the command line.

Develop ASP.NET Core Applications in a Container explains how you can build and rebuild ASP.NET Core applications within Docker as you edit them on your local machine, from within Visual Studio Code, for example.

The following commandline hosts an ASP.NET Core application with dotnet watch on macOS or Linux. Instructions are available for Windows at Developing ASP.NET Core Applications in a Container. Every time you edit and save the application on your local machine, it will be rebuilt within the container. I haven’t tried doing that 1000 times in a row, but you probably can. This scenario relies on volume mounting, to project localy resident source code into a running container. As you can see, volume mounting is a powerful alternative to going through the effort of writing a Dockerfile.

It is important to host web applications with HTTPS. In many cases, you will terminate HTTPS requests before they get to your ASP.NET Core site. In the case that ASP.NET Core needs to directly handle HTTPS traffic and you are running your site in a container, then you need a solution.

The following commands can be used to run the ASP.NET Core sample images with a dev certificate on Windows with Linux containers:

The Hosting ASP.NET Core Images with Docker over HTTPS instructions can be used on Windows, macOS, and Linux.

You can probably see that we’re much farther along in our approach of using .NET and Docker together than our initial 2017 post on the topic. We’re far from done everything that one can imagine with the container space, but have provided a much more complete foundation for you to use as you adopt Docker.

Tell us how you are using Docker and the improvements you would like to see, either with guidance and samples or with .NET itself. We’ll continue to make improvements to make the container experience better.

Staying up-to-date with .NET Container Images
This post describes the container images that we produce and update for you, that you can use with Docker, Kubernetes and other systems. When you are using .NET and ...

Rich Lander [MSFT]
June 18, 2018
0 comment
The RyuJIT transition is complete!
RyuJIT is the code name for the .NET just-in-time compiler, one of the foundational components of the .NET runtime. In contrast, the Roslyn C# compiler compiles C# code ...