Coinciding with the Microsoft Ignite 2019 conference, we are thrilled to announce the GA release of ML.NET 1.4 and updates to Model Builder in Visual Studio, with exciting new machine learning features that will allow you to innovate your .NET applications.

Following are some of the key highlights in this update:

In ML.NET 1.4 GA we have released many exciting improvements and new features that are described in the following sections.

For instance, with this feature you can create your own custom image classifier model by natively training a TensorFlow model from ML.NET API with your own images.

ML.NET uses TensorFlow through the low-level bindings provided by the Tensorflow.NET library. The advantage provided by ML.NET is that you use a high level API very simple to use so with just a couple of lines of C# code you define and train an image classification model. A comparable action when using the low level Tensorflow.NET library would need hundreds of lines of code.

The Tensorflow.NET library is an open source and low-level API library that provides the .NET Standard bindings for TensorFlow. That library is part of the open source SciSharp stack libraries.

The below stack diagram shows how ML.NET is implementing these new features on DNN training. 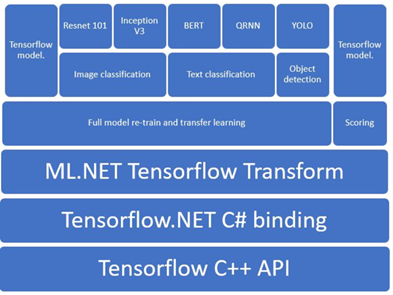 This Image-Classification feature was initially released in v1.4-preview. Now, we’re releasing it as a GA release plus we’ve added the following new capabilities for this GA release:

The main new capabilities in this feature added since v1.4-preview are:

Those pre-trained TensorFlow models (DNN architectures) are widely used image recognition models trained on very large image-sets such as the ImageNet dataset and are the culmination of many ideas developed by multiple researchers over the years. You can now take advantage of it now by using our easy to use API in .NET.

The below API code example shows how easily you can train a new TensorFlow model.

The important line in the above code is the line using the ImageClassification classifier trainer which as you can see is a high level API where you just need to provide which column has the images, the column with the labels (column to predict) and a validation dataset to calculate quality metrics while training so the model can tune itself (change internal hyper-parameters) while training.

There’s another overloaded method for advanced users where you can also specify those optional hyper-parameters such as epochs, batchSize, learningRate and other typical DNN parameters, but most users can get started with the simplified API.

Under the covers this model training is based on a native TensorFlow DNN transfer learning from a default architecture (pre-trained model) such as Resnet V2 50. You can also select the one you want to derive from by configuring the optional hyper-parameters. 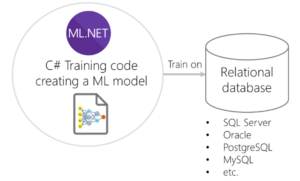 This feature was previously introduced as preview and now is released as general availability in v1.4.

The database loader enables to load data from databases into the IDataView and therefore enables model training directly against relational databases. This loader supports any relational database provider supported by System.Data in .NET Core or .NET Framework, meaning that you can use any RDBMS such as SQL Server, Azure SQL Database, Oracle, SQLite, PostgreSQL, MySQL, Progress, etc.

However, this new Database Loader provides a much simpler code implementation for you since the way it reads from the database and makes data available through the IDataView is provided out-of-the-box by the ML.NET framework so you just need to specify your database connection string, what’s the SQL statement for the dataset columns and what’s the data-class to use when loading the data. It is that simple!

Here’s example code on how easily you can now configure your code to load data directly from a relational database into an IDataView which will be used later on when training your model.

It is important to highlight that in the same way as when training from files, when training with a database ML.NET also supports data streaming, meaning that the whole database doesn’t need to fit into memory, it’ll be reading from the database as it needs so you can handle very large databases (i.e. 50GB, 100GB or larger).

For further details on how to deploy a model with the PredictionEnginePool, read the following resources:

For further background information on why the PredictionEnginePool is recommended, read this blog post.

ML.NET is now building for .NET Core 3.0 (optional). This feature was previosly released as preview but it is now released as GA.

This means ML.NET can take advantage of the new features when running in a .NET Core 3.0 application. The first new feature we are using is the new hardware intrinsics feature, which allows .NET code to accelerate math operations by using processor specific instructions.

Of course, you can still run ML.NET on older versions, but when running on .NET Framework, or .NET Core 2.2 and below, ML.NET uses C++ code that is hard-coded to x86-based SSE instructions. SSE instructions allow for four 32-bit floating-point numbers to be processed in a single instruction.

Modern x86-based processors also support AVX instructions, which allow for processing eight 32-bit floating-point numbers in one instruction. ML.NET’s C# hardware intrinsics code supports both AVX and SSE instructions and will use the best one available. This means when training on a modern processor, ML.NET will now train faster because it can do more concurrent floating-point operations than it could with the existing C++ code that only supported SSE instructions.

Another advantage the C# hardware intrinsics code brings is that when neither SSE nor AVX are supported by the processor, for example on an ARM chip, ML.NET will fall back to doing the math operations one number at a time. This means more processor architectures are now supported by the core ML.NET components. (Note: There are still some components that don’t work on ARM processors, for example FastTree, LightGBM, and OnnxTransformer. These components are written in C++ code that is not currently compiled for ARM processors).

Use ML.NET in Jupyter notebooks

The Jupyter Notebook is an open-source web application that allows you to create and share documents that contain live code, visualizations and narrative text.

In terms of ML.NET this is awesome for many scenarios like exploring and documenting model training experiments, data distribution exploration, data cleaning, plotting data charts, learning scenarios such as ML.NET courses, hands-on-labs and quizzes, etc.

You can simply start exploring what kind of data is loaded in an IDataView: 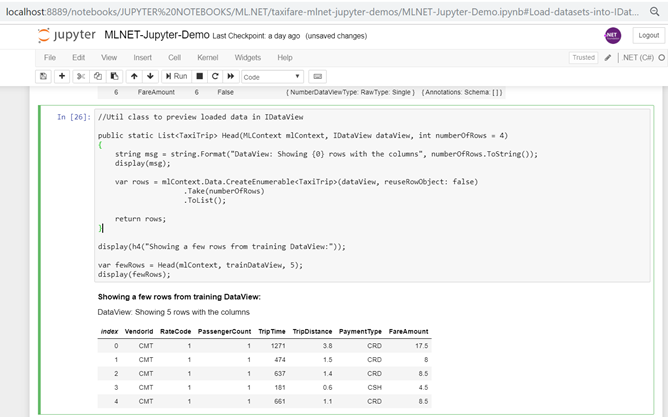 Then you can continue by plotting data distribution in the Jupyter notebook following an Exploratory Data Analysis (EDA) approach: 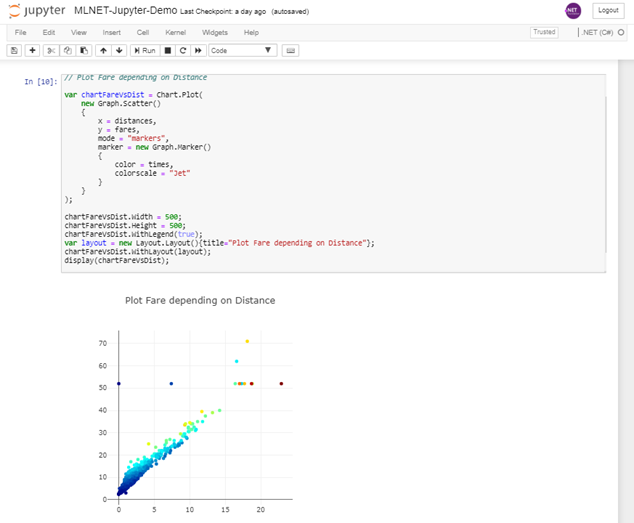 You can also train an ML.NET model and have its training time documented:

Right afterwards you can see the model’s quality metrics in the notebook, and have it documented for later review:

For additional explanation details, check out this detailed blog post:

For a direct “try it out experience”, please go to this Jupyter notebook hosted at MyBinder and simply run the ML.NET code:

The Model Builder tool for Visual Studio has been updated to use the latest ML.NET GA version (1.4 GA) plus it includes new exciting features such the visual experience in Visual Studio for local Image Classification model training.

Visual and local Image Classification model training in VS

As introduced at the begining of this blog post you can locally train an Image Classification model with the ML.NET API. However, when dealing with image files and image folders, the easiesnt way to do it is with a visual interface like the one provided by Model Builder in Visual Studio, as you can see in the image below: 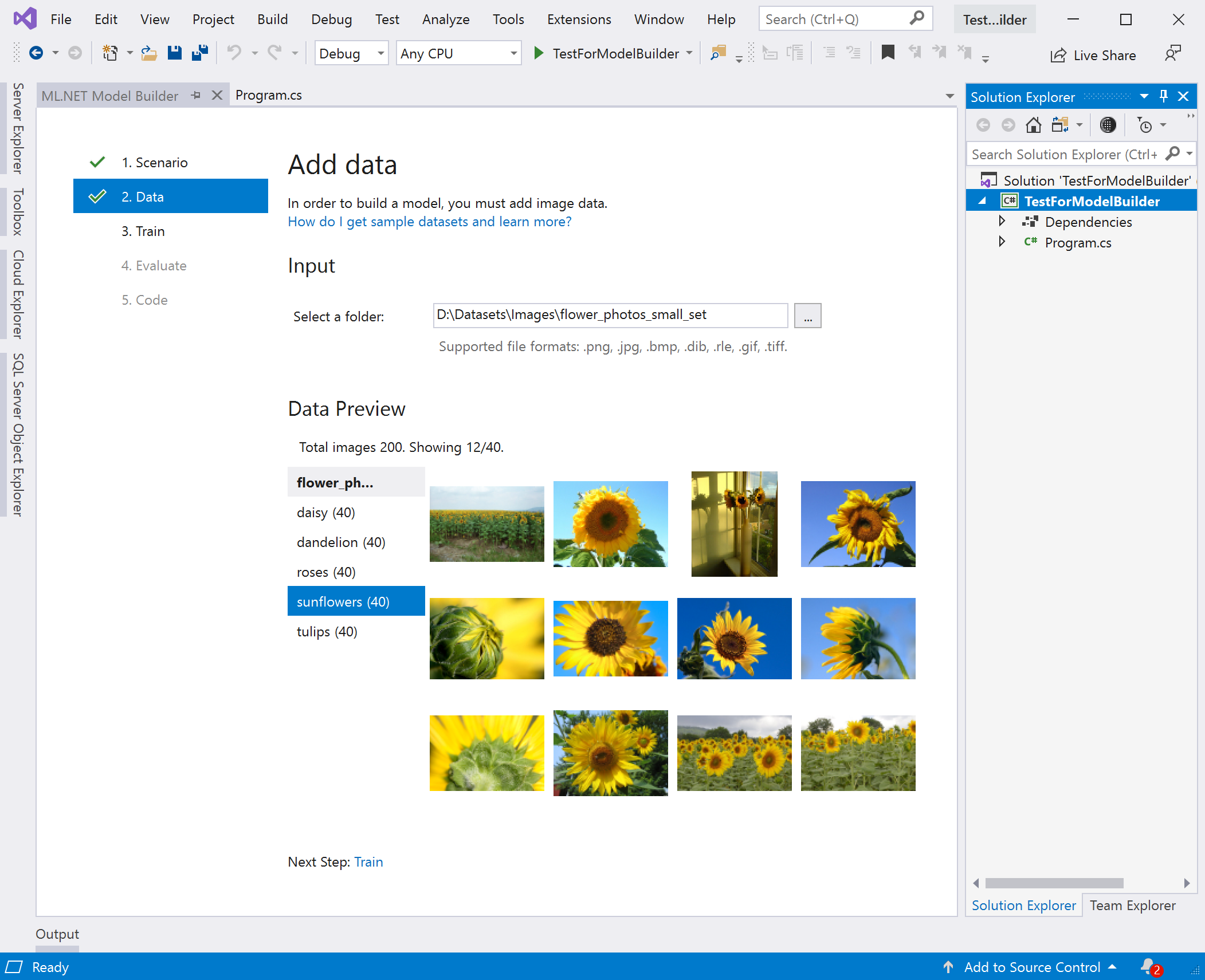 When using Model Builder for training an Image Classifier model you simply need to visually select the folder (with a structure based on one sub-folder per image class) where you have the images to use for training and evaluation and simply start training the model. Then, when finished training you will get the C# code generated for inference/predictions and even for training if you want to use C# code for training from other environments like CI pipelines. Is that easy!

We are excited to release these updates for you and we look forward to seeing what you will build with ML.NET. If you have any questions or feedback, you can ask here at this blog post or at the ML.NET repo at GitHub.

This blog was authored by Cesar de la Torre plus additional contributions of the ML.NET team.

Building Modern Cloud Applications using Pulumi and .NET Core
This is a guest post from the Pulumi team. Pulumi is an open source infrastructure as code tool that helps developers and infrastructure teams work better together to ...