Today we released .NET 7 Preview 4. The fourth preview of .NET 7 includes enhancements to observability in the .NET implementation of OpenTelemetry, the addition of properties to track microseconds and nanoseconds in date and time structures, new metrics for caching extensions, performance-boosting “on stack replacement,” APIs to work with .tar archives, and additional features as part of an ongoing effort to improve the performance of and add features to regular expressions in .NET 7. The preview 4 releases for ASP.NET Core and EF7 are also available.

You can download .NET 7 Preview 4, for Windows, macOS, and Linux.

.NET 7 Preview 4 has been tested with Visual Studio 17.3 Preview 1. We recommend you use the preview channel builds if you want to try .NET 7 with Visual Studio family products. Visual Studio for Mac support for .NET 7 previews isn’t available yet but is coming soon. Now, let’s get into some of the latest updates in this release.

This work wouldn’t have been possible without @maxkoshevoi‘s multiple-month effort. Starting with the first PR in August 2021, all the way to the final PR in April 2022, this was a lot of work that is greatly appreciated by the .NET community.

It’s a really great feeling to know that if you don’t like something about libraries you are using (or even the framework itself), you can go and improve it yourself. – Maksym My name is Maksym Koshovyi, and I am from Kharkiv, Ukraine.

I’ve loved programming since school and been doing it for over 8 years (past 4 even got paid to do it 😄). Learned C# early on and never switched. Such a great language, framework and community! Always loved how easy it is to throw together a WinForms app in a couple of hours, or an API, or even a mobile app (without ever switching to Java or Swift). Also always enjoyed the language itself and the tooling around it that makes it easy to fall into the pit of success.

Ironically, my first contribution ever was a Roslyn analyzer. I got so used to being warned if I do stupid things, that when it didn’t happen I’ve dedicated a day to fixing it. Since then I’ve made many small contributions here or there. Two of the biggest ones for now are in XamarinCommunityToolkit and runtime. It’s a really great feeling to know that if you don’t like something about libraries you are using (or even the framework itself), you can go and improve it yourself. Guess it’s something similar to driving a car you know how to disassemble and fix yourself.

What’s also great about contributing is that you learn so much! All projects are different, and having more perspectives on how things could be done always helps. I always find myself implementing something I’ve found on GitHub in my pet projects. Another thing is feeling that your contribution will make someone else’s life a bit easier. Always feels good thinking about it.

But none of this would be possible without the team that encourages contributions, discusses the issues and helps with PR reviews. Thank you so much for creating such a welcoming and open environment!

The following enhancements were made as part of the ongoing effort to support observability in .NET 7 via OpenTelemetry.

A typical implementation of distributed tracing uses an AsyncLocal<T> to track the “span context” of managed threads. Changes to the span context are tracked by using the AsyncLocal<T> constructor that takes the valueChangedHandler parameter. However, with Activity becoming the standard to represent spans, as used by OpenTelemetry, it is impossible to set the value changed handler since the context is tracked via Activity.Current. The new change event can be used instead to receive the desired notifications.

The exposed methods can be used in the performance-critical scenarios to enumerate the Activity Tags, Links, and Events properties without any extra allocations and with fast items access.

Adding Microseconds and Nanoseconds to TimeStamp, DateTime, DateTimeOffset, and TimeOnly

Prior to Preview 4, the lowest increment of time available in the various date and time structures was the “tick” available in the Ticks property. In .NET, a single tick is 100ns. Developers traditionally have had to perform computations on the “tick” value to determine microsecond and nanosecond values. Preview 4 addresses that by introducing both microseconds and milliseconds to the date and time implementations. Here is the new API surface area:

Thanks to @ChristopherHaws and @deeprobin helping in the design and implementation.

For preview 4 we are adding the remaining planned APIs in order to add span support into our Regex library. The changes span several issues:

These APIs are amortized allocation-free. The main span-based APIs being added for Preview 4 are:

We have also done a lot of work that enhances Regex performance in general, with improvements like:

Finally, we have also made some improvements on the code that is generated by the Regex source generator to make the code more readable and easier to debug, as well as enable projects with multiple source generated regex patterns to share common code between them.

For preview 4 we added metrics support for IMemoryCache. The main APIs being added for Preview 4 are:

GetCurrentStatistics() API allows app developers to use either event counters or metrics APIs to track statistics for one or more memory cache. Note, using these APIs for getting statistics for multiple caches is possible but requires developers to write their own meter.

How to use the APIs

GetCurrentStatistics() API (based on #50406) allows app developers to use either event counters or metrics APIs to track statistics for one or more memory caches with code snippets.

With IMemoryCache.GetCurrentStatistics(), the user now has support for the following use cases:

Using IMemoryCache.GetCurrentStatistics() for one memory cache

Use the AddMemoryCache API to instantiate a single memory cache and via DI get it injected to enable them calling GetCurrentStatistics.

Helps them view stats below with dotnet-counters tool:

In order to get stats for more than one memory cache in the app, the user may use metrics APIs in their own code, so long as they have a way of distinguishing their caches by name or ID:

Each metrics would need to create its own observable gauge (one for hits, then misses, etc.) and each callback function for the gauge iterates through list of caches creating measurements.

For Preview 4, we added the new System.Formats.Tar assembly, which contains cross-platform APIs that allow reading, writing, archiving, and extracting of Tar archives.

For the most common usage (extracting and archiving) the following APIs are available:

We also offer variants that allow extracting from a stream or archiving into a stream:

Additionally, the entries of an archive can be traversed one-by-one using the reader:

And entries can also be written one-by-one into an archive stream using the writer:

We can also pair these new APIs with stream-based compression methods, like System.IO.Compression.GZipStream.

Extracting the contents from a compressed tar archive into the filesystem looks like this:

Writing the contents of a directory into a compressed tar archive:

Many thanks to the JIT community contributors who submitted these important PRs:

On Stack Replacement (aka OSR)

On Stack Replacement allows the runtime to change the code executed by currently running methods in the middle of method execution, while those methods are active “on stack.” It serves as a complement to tiered compilation.

#65675 enabled OSR by default on x64 and Arm64, and enabled quick jitting for methods with loops on those same platforms.

OSR improves startup time. Almost all methods are now initially jitted by the quick jit. We have seen 25% improvement in startup time in jitting-heavy applications like Avalonia “IL” spy, and the various TechEmpower benchmarks we track show 10-30% improvements in time to first request (see chart below: OSR was enabled by default on March 30). 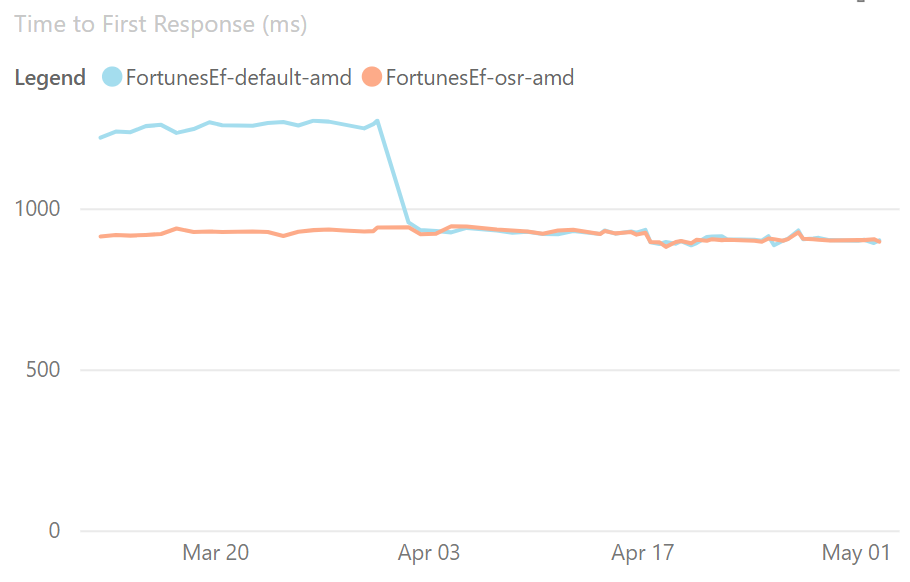 OSR can also improve performance of applications, and in particular, applications using Dynamic PGO, as methods with loops are now better optimized. For example, the Array2 microbenchmark showed dramatic improvement when OSR was enabled.

See the OSR Design Document for details on how OSR works.

See OSR Next Steps for details on the work that went into enabling OSR, and possible future enhancements.

.NET 7 is a Current release, meaning it will receive free support and patches for 18 months from the release date. It’s important to note that the quality of all releases is the same. The only difference is the length of support. For more about .NET support policies, see the .NET and .NET Core official support policy.

We appreciate and thank you for all your support and contributions to .NET. Please give .NET 7 Preview 4 a try and tell us what you think!

James Newton-King
May 11, 2022
14 comments
Regular Expression Improvements in .NET 7
System.Text.RegularExpressions has improved significantly in .NET 7. In this post, we'll deep-dive into many of its exciting improvements.