We’re excited to announce the release of .NET Core 2.1. It includes improvements to performance, to the runtime and tools. It also includes a new way to deploy tools as NuGet packages. We’ve added a new primitive type called Span<T> that operates on data without allocations. There are many other new APIs, focused on cryptography, compression, and Windows compatibility. It is the first release to support Alpine Linux and ARM32 chips. You can start updating existing projects to target .NET Core 2.1 today. The release is compatible with .NET Core 2.0, making updating easy.

You can download and get started with .NET Core 2.1, on Windows, macOS, and Linux:

Docker images are available at microsoft/dotnet for .NET Core and ASP.NET Core.

The Build 2018 conference was earlier this month. We had several in-depth presentations on .NET Core. Check out Build 2018 sessions for .NET on Channel9.

You can see complete details of the release in the .NET Core 2.1 release notes. Related instructions, known issues, and workarounds are included in the releases notes. Please report any issues you find in the comments or at dotnet/core #1614

Thanks for everyone that contributed to .NET Core 2.1. You’ve helped make .NET Core a better product!

.NET Core 2.1 will be a long-term support (LTS) release. This means that it is supported for three years. We recommend that you make .NET Core 2.1 your new standard for .NET Core development.

We intend to ship a small number of significant updates in the next 2-3 months and then officially call .NET Core 2.1 an LTS release. After that, updates will be targeted on security, reliability, and adding platform support (for example, Ubuntu 18.10). We recommend that you start adopting .NET Core 2.1 now. For applications in active development, there is no reason to hold off deploying .NET Core 2.1 into production. For applications that will not be actively developed after deployment, we recommend waiting to deploy until .NET Core 2.1 has been declared as LTS.

We had many requests to make .NET Core 2.0 an LTS release. In fact, that was our original plan. We opted to wait until we had resolved various challenges managing platform dependencies (the last point above). Platform dependency management was a significant problem with .NET Core 1.0 and has gotten progressively better with each release. For example, you will notice that the ASP.NET Core package references no longer include a version number with .NET Core 2.1.

.NET Core 2.1 is supported on the following operating systems:

Note: .NET Core 2.1 is supported on Raspberry Pi 2+. It isn’t supported on the Pi Zero or other devices that use an ARMv6 chip. .NET Core requires ARMv7 or ARMv8 chips, like the ARM Cortex-A53.

If you are new to Raspberry Pi, I suggest the awesome Pi resources at AdaFruit. You can buy a Pi there, too.

Major thanks to Samsung and Qualcomm for investing heavily on .NET Core ARM32 and ARM64 implementations. Please thank them, too! These contributions speak to the value of open-source.

.NET Core now has a new deployment and extensibility mechanism for tools. This new experience is very similar to and was inspired by NPM global tools. You can create your own global tools by looking at the dotnetsay tools sample.

You can try the new tools experience with the dotnetsay tool with the following commands:

We expect a whole new ecosystem of tools to establish itself for .NET. @natemcmaster maintains a list of dotnet tools. You might also check out his dotnet-serve tool.

The following existing DotNetCliReferenceTool tools have been converted to in-box tools.

Remove project references to these tools when you upgrade to .NET Core 2.1.

Improving the performance of the .NET Core build was perhaps the biggest focus of the release. It is greatly improved in .NET Core 2.1, particularly for incremental builds. These improvements apply to both dotnet build on the command line and to builds in Visual Studio.

The following image shows the improvements that we’ve made, compared to .NET Core 2.0. We focused on large projects, as you can see from the image.

Note: These benchmarks were produced from projects at mikeharder/dotnet-cli-perf.

We added long-running servers to the .NET Core SDK to improve the performance of common development operations. The servers are additional processes that run for longer than a single dotnet build invocation. Some of these are ports from the .NET Framework and others are new.

The following SDK build servers have been added:

The primary benefit of these servers is that they skip the need to JIT compile large blocks of code on every dotnet build invocation. They auto-terminate after a period of time. See release notes for more information on finer control of these build servers.

We built a new from-the-ground-up HttpClientHandler called SocketsHttpHandler to improve networking performance. It’s a C# implementation of HttpClient based on .NET sockets and Span<T>.

See the .NET Core 2.1 release notes for instructions on how to enable the older networking stack.

We are entering a new era of memory-efficient and high-performance computing with .NET, with the introduction of Span<T> and related types. Today, if you want to pass the first 1000 elements of a 10,000 element array, you need to make a copy of those 1000 elements and pass that copy to your caller. That operation is expensive in both time and space. The new Span<T> type enables you to provide a virtual view of that array without the time or space cost. Span<T> is a struct, which means that you can enable complex pipelines of parsing or other computation without allocating. We are using this new type extensively in corefx for this reason.

Jared Parsons gives a great introduction in his Channel 9 video C# 7.2: Understanding Span. Stephen Toub goes into even more detail in C# – All About Span: Exploring a New .NET Mainstay.

In the most simple use case, you can cast an array to a Span<T>, as follows.

You can Slice a Span<T>, as follows.

This code produces the following output:

Brotli is a general-purpose lossless compression algorithm that compresses data comparable to the best currently available general-purpose compression methods. It is similar in speed to deflate but offers more dense compression. The specification of the Brotli Compressed Data Format is defined in RFC 7932. The Brotli encoding is supported by most web browsers, major web servers, and some CDNs (Content Delivery Networks). The .NET Core Brotli implementation is based around the c code provided by Google at google/brotli. Thanks, Google!

Brotli support has been added to .NET Core 2.1. Operations may be completed using either the stream-based BrotliStream or the high-performance span-based BrotliEncoder/BrotliDecoder classes. You can see it used in the following example.

This code produces the following output:

The following enhancements have been made to .NET Core cryptography APIs:

The following example demonstrates accessing the Windows registry with APIs provided by the Windows Compatibility Pack.

We’ve added a preview of a new and exciting capability to the runtime called tiered compilation. It’s a way for the runtime to more adaptively use the Just-In-Time (JIT) compiler to get better performance.

With tiered compilation, the compiler first generates code as quickly as possible, with only minimal optimizations (first tier). Then, when it detects that certain methods are executed a lot, it produces a more optimized version of those methods (second tier) that are then used instead. The second tier compilation is performed in parallel, which removes the tension between fast compile speeds and producing optimal code. This model can be more generically called Adaptive optimization.

Tiered compilation is also beneficial for long-running applications, such as web servers. We’ll go into more detail in follow-on posts, but the short version is that the JIT can produce much better code than is in the pre-compiled assemblies we ship for .NET Core itself. This is mostly due to the fragile binary interface problem. With tiered compilation, the JIT can use the pre-compiled code it finds for .NET Core and then JIT-compile better code for methods that get called a lot. We’ve seen this scenario having a large impact for the tests in our performance lab.

You can test tiered compilation with by setting an environment variable:

You can enable tiered compilation for an application by setting the TieredCompilation property, as you can see done in this project.

You can start producing SourceLink information by following the example at dotnet/sourcelink. You can see how it is enable in this project.

Our goal for the project is to enable anyone building NuGet libraries to provide source debugging for their users with almost no effort. There are a few steps left to enable the full experience, but you can get started now.

The following screenshot demonstrates debugging a NuGet package referenced by an application, with source automatically downloaded from GitHub and used by Visual Studio 2017. 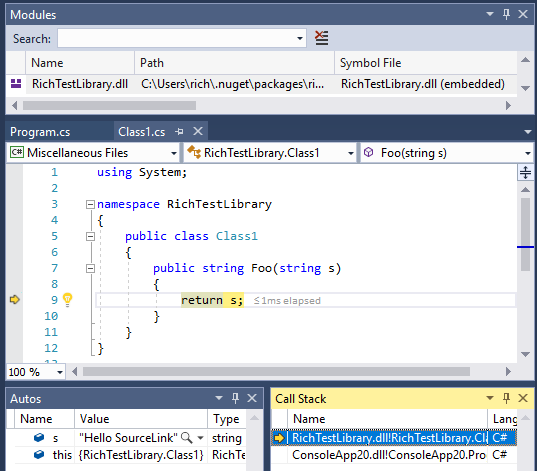 Self-contained publishing relies on runtime versions on NuGet.org. You do not need to have the serviced runtime on your machine.

Using the .NET Core 2.0 SDK, self-contained applications are published with .NET Core 2.0.0 Runtime unless a different version is specified via the RuntimeFrameworkVersion property. With this new behavior, you’ll no longer need to set this property to select a higher runtime version for self-contained application. The easiest approach going forward is to always install and publish with the latest SDK.

We added a set of environment variables to .NET Core images to make it easier to host ASP.NET Core sites at any .NET Core image layer and to enable dotnet watch in SDK container images without additional configuration.

See the .NET Core 2.1 release notes for instructions on how to disable minor-version roll-forward.

We have been working on bringing .NET Core to Snap and are ready to hear what you think. Snaps, along with a few other technologies, are an emerging application installation and sandboxing technology that we think is intriguing. The Snap install works well on Debian-based systems and other distros such as Fedora are having challenges that we’re working to run down. The following steps can be used if you would like to give this a try.

Watch for future posts delving into what Snaps are about. In the meantime, we would love to hear your feedback.

.NET Core 2.1 is a big step forward for the platform. We’ve significantly improved performance, added many APIs, and added a new way of deploying tools. We’ve also added support for new Linux distros and ARM32, another CPU type. This release expands the places you can use .NET Core and makes it much more efficient everywhere.

We expect .NET Core 2.1 to be available in Azure App Service later this week.

You can see the progress we made with the .NET Core 2.1 interim releases: RC1, Preview 2, Preview 1. Thanks again to everyone who contributed to the release. It helps a lot.

Matt FJH June 5, 2018
9 comments
Announcing ML.NET 0.2
Last month at //Build 2018, we released ML.NET 0.1, a cross-platform, open source machine learning framework. We would like to thank the community for the engagement so ...