A new kind of GridView right in your console: Introducing the early preview of ConsoleGuiTools

Yes. This is yet another post about GridViews. We love them. You love them. What’s not to like?

If you’re not familiar with Out-GridView, it can be used to interactively view objects as a table allowing sorting and filtering. Many PowerShell users like to use it within a pipeline for interactive selection of objects that get processed later in the pipeline.

Let’s recap where we’re at with respect to GridViews:

Today, I have the exciting opportunity to talk about a new GridView.

The Microsoft.PowerShell.ConsoleGuiTools is a module that will contain a set of cmdlets that enable console-based GUIs. Today, it contains one very important cmdlet: Out-ConsoleGridView. 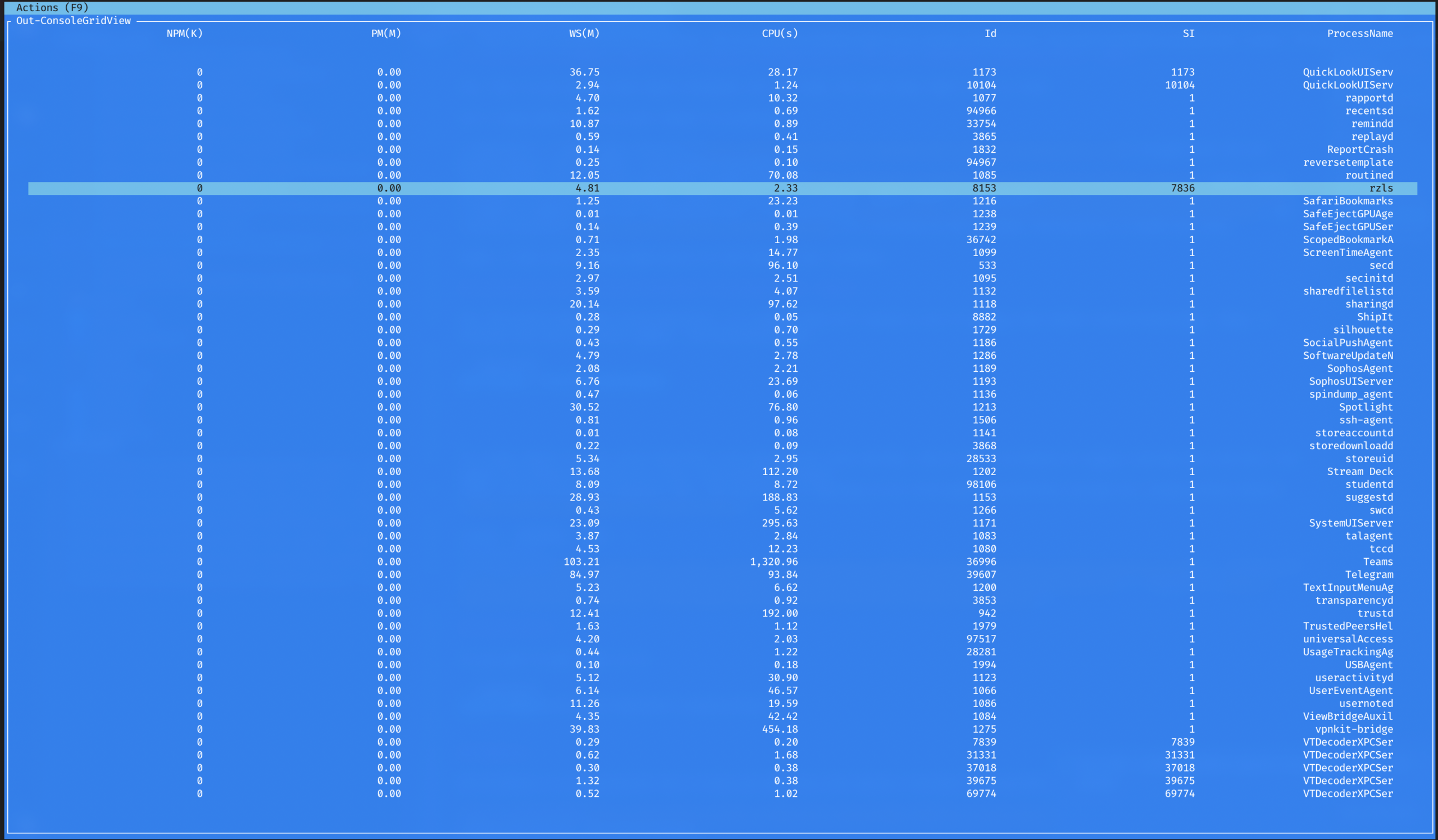 This shows up right in the same console window you were using without launching any outside process. This module leverages the incredibly powerful and cross-platform gui.cs library by Miguel de Icaza.

In that last gif, you might have also noticed that mouse clicks work in the Actions menu!

If you want to get this right now:

One of the most powerful features, the -PassThru parameter lets you use the GUI to select data to send further down the pipeline.

If you were so inclined the above script uses -PassThru to create a pretty effective emulation of a Process Manger.

You can click on the actions menu, dialogs and grid view using your mouse.

You can also use your keyboard: 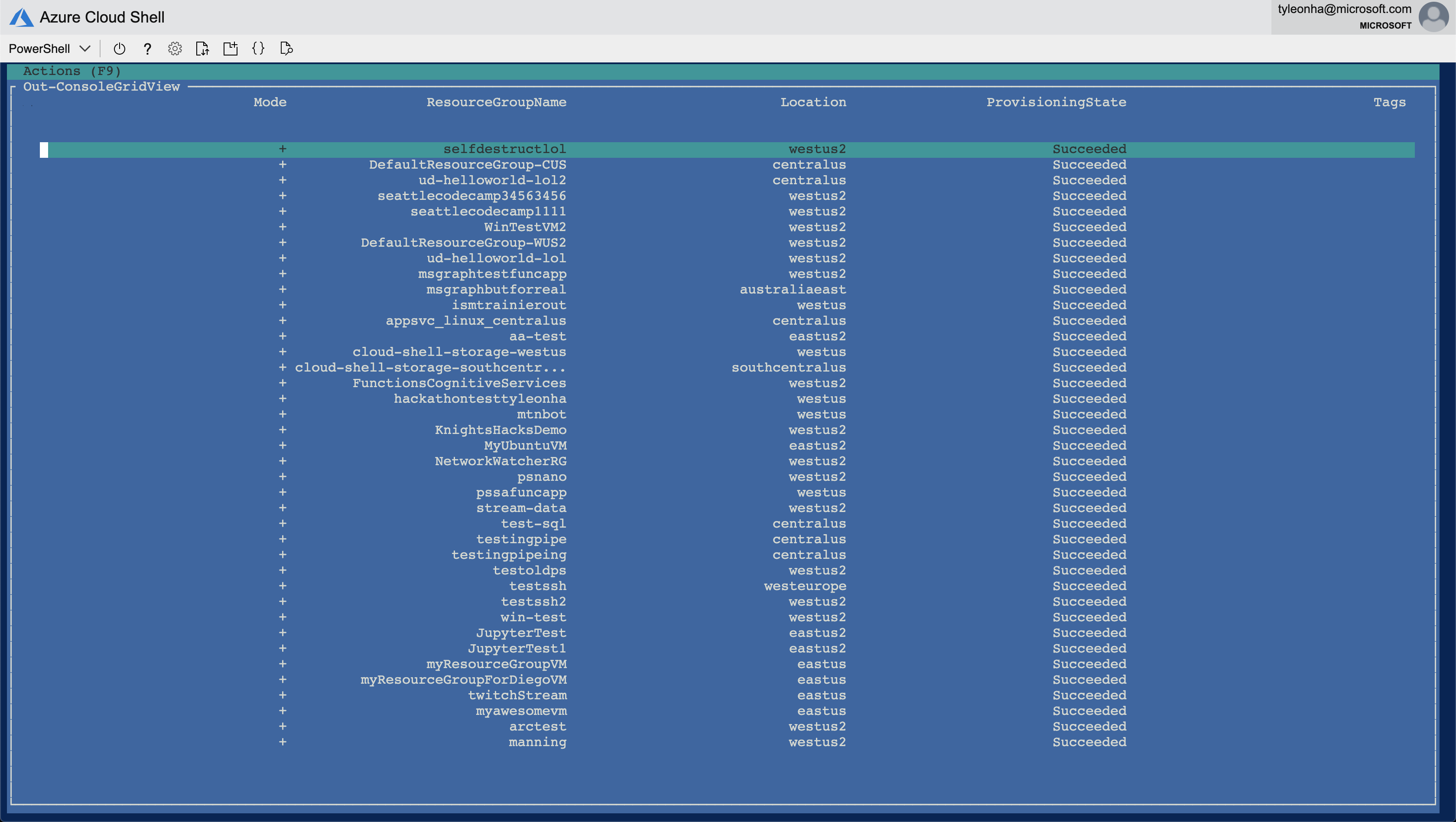 Since the Console GUIs (or CUIs) in Microsoft.PowerShell.ConsoleGuiTools show up in the same console you’re prompt is in, support for environments that don’t supply a GUI but have a terminal emulators, like Azure Cloud Shell, work out of the box.

In fact, the gif in this very blog post was recorded in Azure Cloud Shell!

This is Microsoft.PowerShell.ConsoleGuiTools differentiating feature to other Out-GridViews. It’s a GUI tool, without needing a GUI.

Install it in Cloud Shell and let us know what you think!

Currently, the Microsoft.PowerShell.ConsoleGuiTools module works only on macOS and Linux due to a known gui.cs issue on Windows.

Since Windows has multiple other options for GridView’s we felt that this was a reasonable limitation for now.

We are looking for a community member to help port Show-Command and Show-Object to ConsoleGuiTools. Check out the repository and post in the issue tracking Show-Command if you’re interested.

With the majority of the brunt work integrating PowerShell & gui.cs done, we are also open to submissions for new graphical commands or packages.

Secret Management Preview 2 Release
Note this blog post is the third in a series on the releases of this module: We are excited to release a second preview of the Secret Management Module. ...

Sydney Smith
March 19, 2020
10 comments
PowerShell 7.1 Team Investments and Preview.1 Release
The PowerShell 7 release marks a huge milestone for PowerShell, the community, and the team! Today we released the first preview for PowerShell 7.1! This release ...