Say you’re demonstrating some code at a conference. What’s the best way to do it? If you show only the code window, then you’re counting on the audience’s imagination about how the code will work (and their trust that it does!). But if you hit F5 to run it then this breaks the flow. And I find it hard to keep both the code and the output in my mind at the same time.

I think this is one of those problems that can be solved by technology! So here’s a small plugin for Visual Studio[http://blogs.msdn.com/lucian/archive/2008/10/16/liverun-a-vs-plugin-to-see-the-output-of-our-program-immediately.aspx]. It grabs the current text buffer, compiles it in the background, runs it, and displays the output in a topmost window. 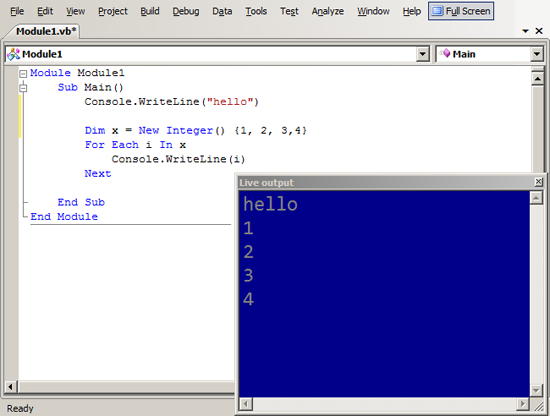 Community Interview with Me! (Beth Massi)
Here's another community interview from our Italian Visual Basic MVP Alessandro Del Sole, this time with yours truly. ;-) I decided to release this one today since it's ...