In this post I share seven reasons why Visual Studio 2017 should be your first choice of IDE for C++ development (to quickly jump to each section of this blog post, follow the links below):

For those of you that prefer to learn more about this topic in video format, check out the 7++ reasons to move your C++ code to Visual Studio 2017 BUILD breakout session.

There are multiple reasons why we choose C++ when we write code: code portability, runtime performance or low power consumption. At the end of the day, many of us also love writing C++, and it is our desire to better ourselves to write modern C++.

Visual Studio 2017 comes with a big update in terms of C++ language conformance. It supplies a close to complete list of new features in the C++11 and C++14 standards. Only three features remain unimplemented: two-phase name lookup from C++98, a conforming preprocessor, and a complete implementation of Expression SFINAE. Visual Studio 2017 also makes great progress towards C++17 with many new compiler and libraries features.

The C++ team will continue its work on C++17 and the C++ compiler rejuvenation effort will bring the missing C++98 features. In addition, Visual Studio 2017 comes with support for several C++ Technical Specifications:

I encourage you to try them all and provide feedback to the Standards body before they become part of the C++ standard.

If you are looking for guidance on how to write modern C++, a group led by Bjarne Stroustrup created the C++ Core Guidelines with the goal of helping people use modern C++ effectively.

To help with the adoption of the C++ Core Guidelines in your organization, Visual Studio 2017 ships with C++ Code Analysis tools (known as C++ Core Checkers) that validate your code against the guidelines, running bounds checks, type checks (including const checks) and resource management checks and then making suggestions on how to improve your code. The links in each suggestion point to the relevant parts of the guideline document that discuss the specific suggestion. 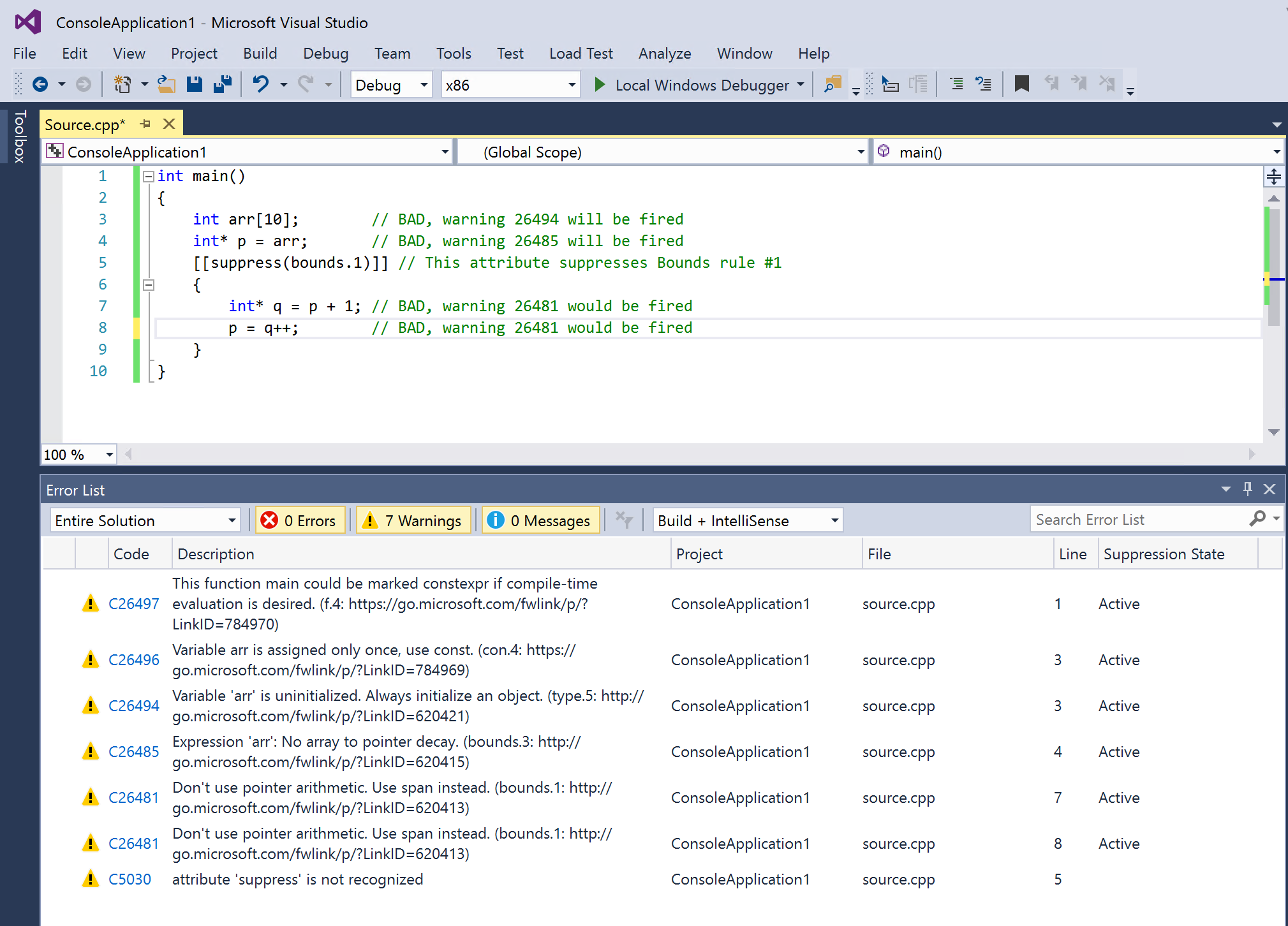 The C++ Core Checkers go hand-in-hand with the C++ Guideline Support Library, a header-only library that contains helper functions and types suggested by the guidelines to be used in your modern C++ codebase. This library is available as a GitHub repo, a NuGet package, and through VCPkg.

Moving your C++ code between Visual Studio versions sometimes can create a bit of friction, especially if you are dealing with a large codebase or you depend on 3rd party libraries that haven’t announced their support for the latest MSVC compiler yet. In fact, the primary migration blocker we hear from developers in our surveys is the fact that a 3rd party dependency, either open-source or proprietary, has not yet been migrated.

What this means in practice is that you can move your code to compile with the latest MSVC compiler and libraries even when your 3rd party dependencies have not yet moved!

VCPkg – acquire and build hundreds of C++ libraries on Windows

If you are depending on an open-source library, chances are you will find it in VCPkg’s list of supported C++ libraries for Visual Studio 2017. VCPkg (video here) has more than 220 open-source C++ libraries readily available.

Acquiring and building a C++ library on Windows has never been easier:

REM Get VCPkg from GitHub

If you are only looking to use Visual Studio 2017 without upgrading your VC projects, that is now easier too. In previous releases, you had to install both the latest and the old Visual Studio versions, side-by-side, for the latest IDE to be able to build your projects.

You can now install just the MSVC toolset directly from the Visual Studio 2017 Installer by selecting the “VC++ 2015.3 v140 toolset (x86, x64)” option from the “Desktop development with C++” workload.

Migrating from Visual Studio 2013 or older?

If you are upgrading your C++ projects from Visual Studio 2013 or older, even 2003, you will find that we’ve put significant effort in making the Visual C++ migration documentation as complete and accessible as possible, documenting the compiler and linker errors you might encounter, explaining the reasons behind them and how to address them.

When it comes to performance, Visual Studio 2017 brings dramatic performance improvements that vastly change the responsiveness of the IDE, making it truly feel faster:

The IDE now also monitors the performance characteristics of all VS extensions, notifying you in case of slowdowns originating from an extension during IDE startup, solution load, and typing.

#4 Productivity in the developer inner-loop

For many of you, productivity is the main reason you are using Visual Studio. The Visual Studio IDE saves you time in your everyday development when it comes to editing, building, testing, diagnosing as well as committing your code to source control.

Visual Studio 2017 includes a lot of new features as well as many user-suggested enhancements to existing functionality that will bring you unparalleled productivity to your C++ development inner-loop.

The Find All References window has been redesigned from the ground-up to scale to larger result sets with incremental results display, better filtering, sorting, and searching within results. You can now also differentiate between reads vs. writes for fields/variables/parameters.

The Go To window (“Ctrl+,”, previously called Navigate To) becomes the central hub for code navigation by unifying several operations under one roof: ‘go to line’, ‘go to file’, ‘go to type’, ‘go to member’, and ‘go to symbol’.

Predictive IntelliSense uses contextual information to limit the number of results displayed by Member List or AutoComplete List to only those results that are the most obvious candidates for the current code location. This is an experimental feature that you will need to first turn on from Tools > Options > Text Editor > C/C++ > Experimental >> Enable Predictive IntelliSense = True

Exception Helper improves a common scenario of debugging and diagnosing a first-chance or unhandled exception by breaking on the line the exception is thrown, displaying summary info about the exception, and performing an access violation analysis (if applicable).

Run to Click makes it a lot easier to debug your code without the need to set temporary breakpoints or use the context menu (to invoke Run to Cursor).

Writing unit tests is the perfect way to validate individual components of your code and running them on an ongoing basis avoids regressions. But running the tests on the command line breaks your inner-loop productivity. Visual Studio’s goal is to make this experience as seamless as possible, enabling you to run the tests right after you make edits to your project.

Visual Studio 2017 adds support for Google Test (with Boost.Test coming soon) allowing you to easily create, enumerate and run tests, and optionally measure their code coverage directly from the IDE regardless of the unit test framework you choose to use.

In addition to the performance improvements for git operations mentioned above, Visual Studio 2017 allows you to do more of your end-to-end workflow without leaving the IDE. You can:

In addition, with Visual Studio 2017 and the Continuous Delivery Tools for Visual Studio extension, you can subject every commit to higher scrutiny by reviewing your C++ Code Analysis results before committing. 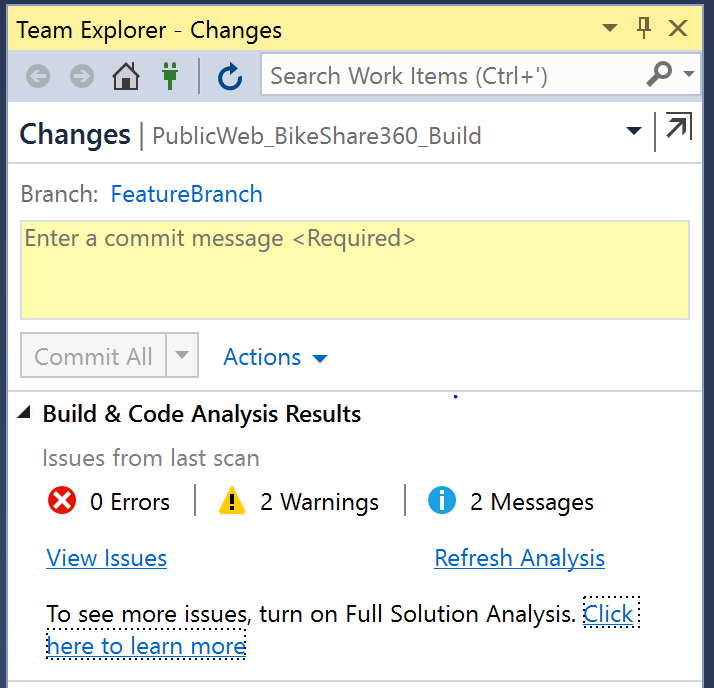 #5 Bring your C++ sources to Visual Studio with Open Folder

Now, I know that not all of you reading this post are Visual Studio users considering upgrading to the latest version. Some of you may be using other C++ IDEs or editors, considering adopting Visual Studio. But you might think that your codebase (which doesn’t come with .vcxproj and .sln files) is not well suited for loading inside Visual Studio. You might believe that the productivity features that I just outlined for you above couldn’t possibly work with your CMake or makefile project. This next reason addresses exactly your concern.

Visual Studio 2017 supports opening folders containing any code without the need to create solutions or projects (video here). Via “Open Folder”, you will have a more natural way to manage your files regardless of the build system you choose to use or the environment/platform you choose to target. With very little configuration, you get access to all the powerful C++ code understanding, editing, building, and debugging capabilities that you come to expect from Visual Studio with MSBuild projects.

While the out-of-the-box experience today allows you to only target the Windows environment, Visual Studio 2017 will soon add support for MinGW and Cygwin environments as well. To see a sneak peek at the experience, check out this MinGW demo during the C++ Panel at BUILD 2017 (click to jump to 2:20m). 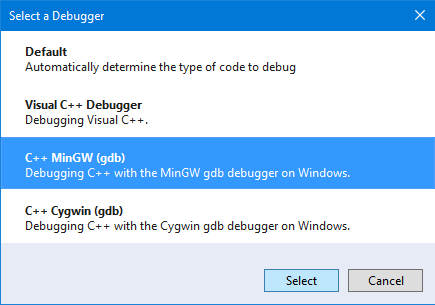 The experience of developing your CMake projects with Visual Studio should not be limited to only targeting Windows. With that in mind, Visual Studio 2017 will soon expand support to allow targeting Linux with CMake as well. To see a sneak peek at that experience, check out the CMake Linux demo at BUILD 2017 (click to jump to 42:00m). 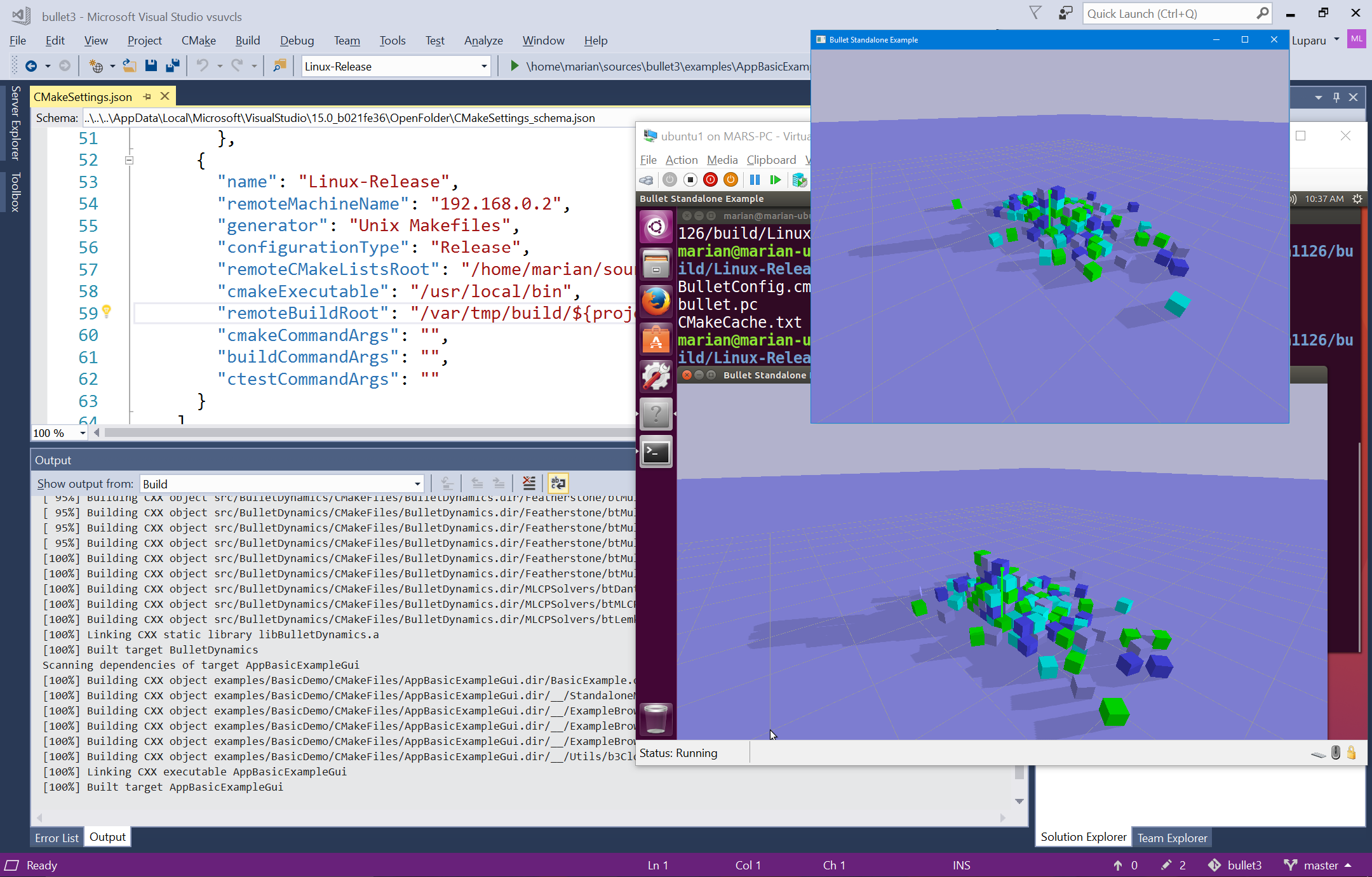 #6 Target Windows, Android, iOS, and Linux from a single IDE

In addition to C++ development for Windows Desktop and Universal Windows Platform, Visual Studio also comes with support for targeting Linux, Android and iOS. Visual Studio 2017 is the one IDE that allows you to target any platform from a single IDE without having to switch your development box.

Visual Studio 2017 has built-in support for Linux development, allowing you to very easily connect to remote Linux machines, local or Azure VMs running Linux, and even Windows Subsystem for Linux in Windows 10. The requirements for the remote Linux system are very low: you need an SSH server with gdbserver and a C++ compiler installed. You can also share your C++ code easily with projects targeting other platforms. 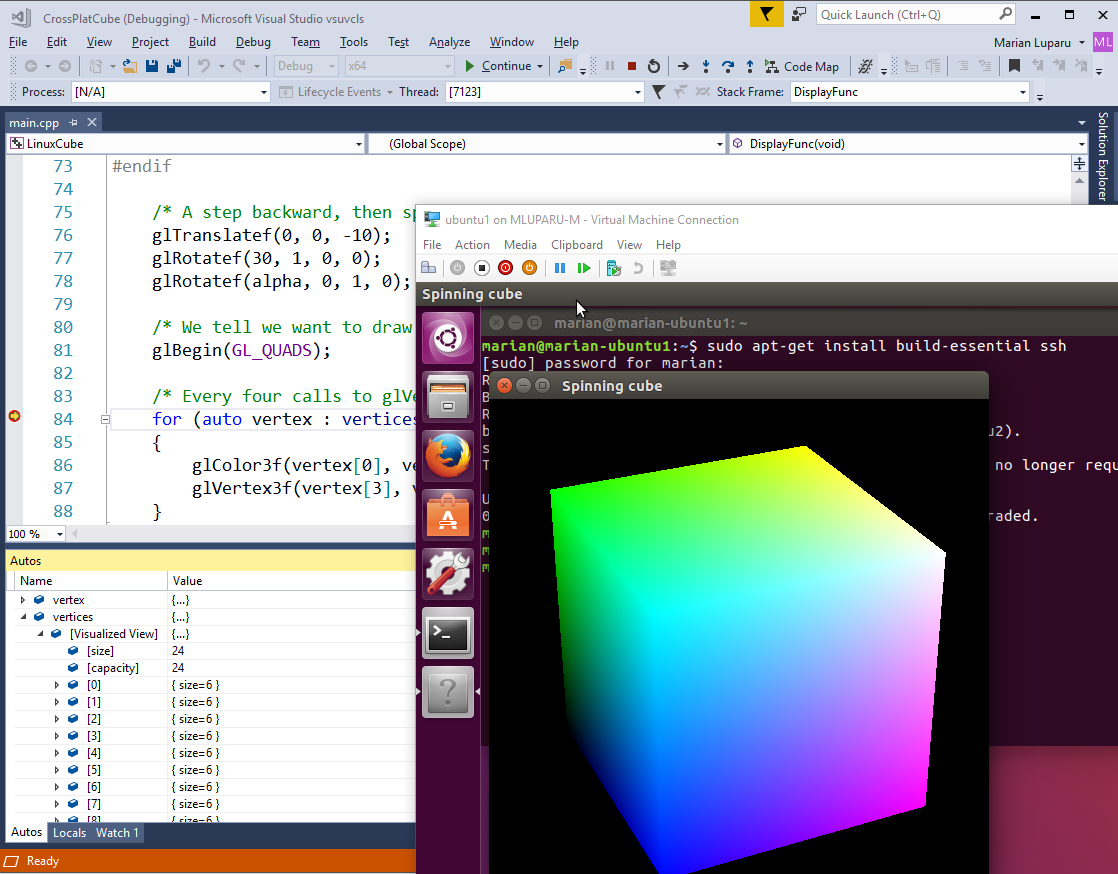 With Visual Studio, you can import your C++ Xcode projects, benefit from all the C++ productivity improvements Visual Studio 2017 provides, and if needed you can always reopen your projects in Xcode for specific operations like storyboarding or iOS localization that are not directly supported by Visual Studio today.

And finally, the reason you should use Visual Studio 2017 for your C++ development is that you helped build it!

This release incorporates so many of your suggestions and bug reports that it is hard to imagine how the product would’ve worked without them. Thank you! Visual Studio 2017 addressed UserVoice items that amount to 1,540+ votes and fixed 980+ bugs reported via Connect and through the IDE.

Please report your feedback via UserVoice (for suggestions) and directly in the IDE via Help > Send Feedback > Report A Problem (issues reported are visible at https://developercommunity.visualstudio.com). The Visual Studio team spends a lot of time reading this feedback and incorporating it, one way or the other, into the upcoming releases, so keep it coming.

Visual Studio 2017 is the one IDE that gives you the best C++ development experience regardless of the build systems you use (MSBuild, CMake, Ninja, make, etc.), regardless of the C++ libraries you depend on (see vcpkg library manager above), and regardless of the platforms you target (Windows desktop, Linux, etc.)