When I announced that Visual Studio 2008 SP1 RTM will install over SP1 beta, we were on track to make that reality. However, when SP1 beta shipped we found that adding new components into existing features was causing a prompt for source for non-default installations of Visual Studio 2008. To fix this, we would have to remove those components and put them into a new feature. This, in turn, causes the installation to not actually update most files if the beta was installed because it advertises the features.

After a lot of discussion, we decided that because a prompt for source is a blocking issue for more customers that installed the beta we would block SP1 RTM from upgrading SP1 beta. To make this easier, we have provided a tool that uninstalls only certain beta patches. Not all patches need to be removed so this exercise is made simple and relatively faster than uninstalling all of the beta.

Note: you do not have to uninstall Visual Studio 2008 Express Editions with SP1 Beta prior to installing Express SP1 RTM. The tool described below for VS box SKUs does not apply to Express SKUs.

If you installed VS2008 SP1 Beta, you will see a dialog similar to the following. 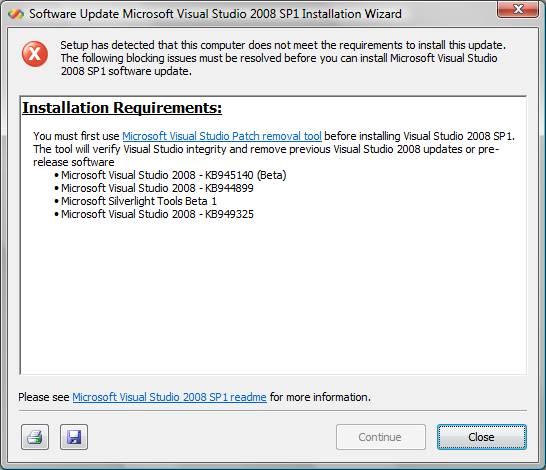 The dialog above lists all the pre-release updates that must first be removed, depending on which you have installed. It reads,

The tool is straight forward to use and should allow you to install VS 2008 SP1 – assuming you are running as an administrator and have applicable products installed.

When VS 2008 SP1 Beta is installed it adds new components to existing features. This causes Windows Installer to install that feature, its parent features, and all those features’ child features which follow their parent install state. If one of those features was not already installed, the files authored into that feature likely do not already exist on your machine. Windows Installer then prompts for source to find and install those files.

To fix this, we have to move those new components to new top-level features which always get installed.

Because a patch alters the view of the product – the installer package (.msi file) and all patch packages (.msp files) combined – those new components are now part of the product. When SP1 Beta is already installed and SP1 RTM is being installed, those new components in Beta get removed from their parent features and put into new features. Because a there is no "move" operation, it’s actually a "delete" and an "add". Deleting a component, however, advertises the parent feature. The result is that any files within affected features are not updated because they are not registered as being installed locally. In fact, none of those files will ever be upgraded again until the product is reinstalled with a specially crafted command line specific to your machine, or uninstalled and then re-installed. That means no updates and no new features for a lot of the product.

The tool we have provided performs these same checks on product that SP1 updates and attempts to fix them. When uninstalling patches, however, you might be prompted for source to restore files in shared components. This happens when share components in another product were already updated. When any other products’ shared components are then updated, those products’ baseline caches are not updated with a backup copy of those shared files already updated. To streamline the operation, for one product where this happened 100% of the time we shipped the source but it was small – only a few megabytes. But for Visual Studio and other products which are much larger overall, note the title of the source prompt dialog, insert your installation media (network installs likely won’t cause prompts), and browse to the path of that product. Typically this will be vs_setup.msi in the root directory for the drive containing the installation media.

Updated: added that users do not have to remove Express SP1 Beta prior to installing Express SP1 RTM.

ISA Proxy Client may be required to download VS 2008 SP1
If you're on a network that uses Microsoft ISA Server or another proxy server, you may have problems downloading Visual Studio 2008 Service Pack 1. The error dialog ...

Heath Stewart
August 12, 2008
0 comment
Setup.bin is probably not a Trojan horse
Some virus scanning application have been reporting that setup.bin is a Trojan horse containing one of the following viruses: This file is typically installed ...