The Future of OData NxT (Neo)

Few months ago I announced a collaboration with the OData team to start building a new version of OData that can withstand the forever changing requirements in software design and architecture. I got together with Sam Xu and we decided to kick-off a spin-off version of OData.NET that I called OData NxT (Neo)

OData Neo is an attempt to reconceptualize the core capabilities of OData while maintaining the original syntax protocols published by Microsoft back in 2007. The new Implementation will fulfill the following priorities:

The new implementation is aiming towards creating a communication protocol-agnostic library. Which means that OData may no longer be tied up to RESTful APIs communication and can be used broadly across any system-to-system integration.

For instance, if two systems decided to use gRPC or SOAP or any other protocol to communicate, these protocols will not be impediment in establishing that connection while leveraging the powerful capabilities of OData. here’s an illustration of this approach: 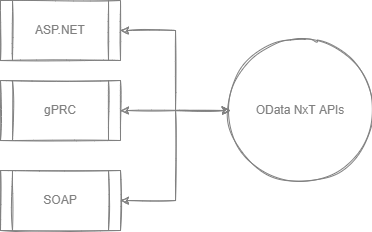 The APIs in the above example will simply receive an odata query and turn it into an expression and vice versa. It has absolutely no attachment to any particular protocol of communication which makes it more powerful to integrate with any system.

Protocol-Agnostic OData shall expand the reach of OData to systems that don’t neccearily use REST. But more importantly, this priority will allow OData to become an adapative technology that can withstand the challenge of time in a forever changing industry.

The concept of adaptibility will be driving most of our architecture and design decisions throughtout this project and all other complimantry components that will built to support this effort.

Modular technology allows the community of engineering to develop and contribute to any platform to make it more useful to fit particular scenarios that may be beyond the priorities of the core engineering team.

Querying data can come in all different shapes and forms. And while the standard OData protocol offers plenty of options to query data in terms of shaping, selecting, ordering and so many other options, it’s still limited in terms of allowing the engineering community to drive larger impact through plug-n-play modules for querying.

OData Neo is aiming to become a marketplace for all things related to data querying over the wire. We want to allow anyone, anywhere to offer more querying capabilities so others can benefit from these capabilities at scale.

At it’s core design, OData Neo shall be completely, and easily be rewritable to allow any engineering team to optimize for performance. We will be avoiding the common mistake of creating un-replaceable, un-rewritable core components that becomes a pain down the road for any team who are trying to push for higher performance, optimizations or even a better implementation.

We have split OData Neo into three main components as follows: 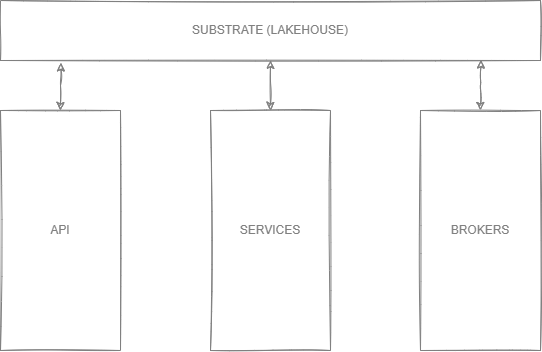 Let’s talk about the components of OData Neo here in detail:

The substrate or the Lakehouse is a new pattern I will be experimenting with to push decoupling of any system components beyond interfaces and dependency injections. Ideally components should be subscribed to one and only one dependency at all times and execute all their communications through that substrate.

The lakehouse pattern will be very similar to queues, except that it allows components to fire-n-observe instead of just fire-n-foreget. This way we allow any component to be plugged into the system even in runtime without impacting the existing flow. Here’s an example:

Assume that our API client is ODataClient which exposes a function Query(string odataQuery). During integration the client would look something like this:

The substrate will handle communicating with listeners to the Query event and communicate with all the subscribers to that event. This pattern is very similar to the subscriber pattern except that the publisher is waiting on the other side for the listeners to respond.

This way, the API client can send events to any number of subscribers without having to know anything about these subscribers or their contracts. The same thing goes for the subscribers with the publishers. Software engineers now may develop components that plug into the substrate, listen to events in the system and act on it.

Exposure components like the exposed APIs from the core library will mainly focusing on two basic functionality:

Both are very important to allow engineers to fully control incoming OData queries or generate ones out of simple expressions in the system so they can push it further to other systems.

APIs shall be easily mockable for N-Tier system architecture engineers but also modular to allow for expansion in the future for further capabilities.

Services are the core business logic of OData Neo. Services will contain all the routines and sub-routines needed to digest and map an OData query into expressions, and strongly typed collections or collection interfaces so they are easily consumable by API developers.

Services can be of three different types, Foundations that hold primitive operations. Processing that holds higher-order business logic and lastly Orchestrations that combine multiple entity types for processing with a unified contract.

Brokers will abstract away native or external dependencies the OData Neo core functions may need so they are replaceable down the road with better dependencies without changing the business logic of the library.

Modularity as a second priority will allow OData Neo Marketplace to expand beyond it’s current capabilities, and we can’t wait to see how our community is going to form their own modules to make OData Neo suitable perfectly for their businesses.

Modern software architecture demands certain capabilities in terms of integration. We want to allow OData queries to pass through any number of microservices/lambdas to land on the data-owner service and successfully execute and retrieve a query.

Transcendence in it’s essence is the ability to allow a microservice to receive and pass an OData query to it’s dependencies. This priority is important in terms of adapting to modern design like microservices, serverless and any other patterns that may occur in the future.

But Transcendence also aims for aggregation and control. We want to allow software engineers to develop microservices that can receive one single OData query and execute that query across multiple services or data-owning services. I will call that Query-Fanning and let’s visualize it as follows: 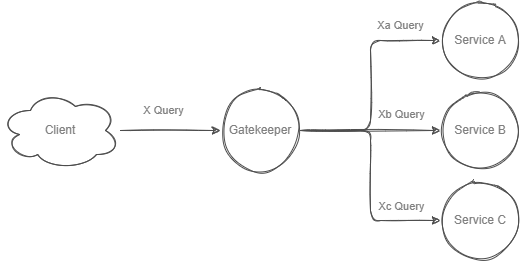 While aggregation is possible today with the current version of OData. It is not as seamlessly as it can be. We aim to make Transcendence a plug-n-play capability. All you got to do as an engineer is to break an incoming expression into smaller expressions with the new OData.Neo library and then post and aggregate responses.

The new implementation of OData will be strictly following The Standard to ensure the software is at the highest quality possible with Test-Driven approach and ongoing pushes for code rubs and pure coding to ensure a systematic intentional engagement of our community in the development of the new technology and it shall also help with the maintainability of the system since it’s being built in the open.

Now, let’s discuss the roadmap for OData Neo. This preliminary roadmap will set the initial tentative expectations for deliverables as follows:

There are few things that I need everyone to understand about this roadmap, which are as follows:

And With the aforementioned priorities we believe that we can explore new realms of software integration where OData can have an even further reach than what it already has today from the smallest APIs and applications to the largest enterprise-size platforms that already serve millions of customers today.

Here’s some important information about this new initiative to modernize OData:

Update: After discussion with Sam Xu and Michael Pizzo we decided to call the project OData Neo instead of NxT so it wouldn’t give the impression that it replaces the existing OData effort.

$compute and $search in ASP.NET Core OData 8
Introduction OData system query options, such as $filter, $orderby, are a set of query string parameters that control the amount and order of the data returned for the ...