One of our ALM Rangers Hosam Kamel from our Center of Expertise has recently just finished a large project that involved integrating several different technologies and platforms.  In this project he made several key learning’s and wanted to share them with the ALM Community!

Quality is not something that can be easily added later. Problems that are too complex, too obscure, or are discovered too late in the product cycle are usually not fixed, the Code Analysis feature of Visual Studio performs static code analysis on code to help developers identify potential design, globalization, interoperability, performance, security, and a host of other categories of potential problems. (In Visual Studio 2013 a lot of new enhancement has been added you can check this blog post for more details What is New in Code Analysis for Visual Studio 2013)

Many organizations use different development tools to target different software platforms while Visual Studio is often the tools of choice for the Widows platform, Eclipse-based Integrated Development Environments (IDEs) are almost invariably the tools of choice, TFS is Microsoft’s collaboration platform for software development teams. It provides services such as source control, management of work items, request management, a test platform, and build and release management and it helps the organizations to avoid having multiple Application Lifecycle Management (ALM) tools and methodologies.

In this post I’ll focus more on how you can use Team Explorer Everywhere to build Java project and run code analysis using SONAR as a build step.

Multiple tools will be integrated together to achieve this scenario.

· SonarQube (previously called Sonar) is an open source quality management platform, dedicated to continuously analyze and measure technical quality, from project portfolio to method. If you wish to extend the SonarQube platform with open source plugins.

As a part of build process, SONAR code analysis will be kicked-off to run the code analysis on the latest pushed code on TFS and the result will then get published to SONAR portal.

Java developers can check the code analysis from SOANR portal fixing the issues locally and re-run the build again if needed.

· Download the step file from Visual Studio Extension gallery, You must have the following installed on the same server that is hosting the Team Foundation Build Agent:

Create a new build definition based on Ant 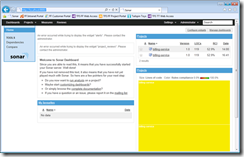 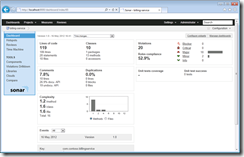 Visual Studio provide a great tool to ensure quality with enhanced code review workflows to facilitate the collaboration among developers and provide a rich environment to review code and propose changes.

In Team Foundation Server TFS we put more focus on the Cross-Platform Development, You use the languages that are right for your projects, and you target the platforms that let you reach your customers. Platforms like Windows Phone, Windows, Android, iOS, Linux, and more, with data and services in the cloud, As far as TFS is concerned, all code is created equal. You can use TFS to share code and to build continuously across all your platforms. And TFS can help you collaborate within your team, and with your customers.