The Visual Studio Test Platform is open and extensible, with tests written using various test frameworks and run using a variety of adapters. To reduce on-boarding friction, the feature ought to work on existing test code. It especially needs to work on existing MSTest framework based test code – there is a huge corpus of such tests already written, and it would be unrealistic to expect users to go in and update their test code just to take advantage of the feature. The feature must acknowledge that adapters for frameworks like NUnit, and xUnit.net already enable parallel test execution. And importantly it must not break existing test runs. Accordingly, the feature took shape as follows:

The Solution at Visual Studio Update 1

Parallel test execution leverages the available cores on the machine, and is realized by launching test execution on each available core as a distinct process, and handing it a container worth of tests (assembly, DLL, or relevant artifact containing the tests to execute) to execute. The unit of isolation is a process. The unit of scheduling is a test container. Within each container, the tests will be executed as per the semantics of the test framework. If there are many such containers, then as processes finish executing the tests within a container, they are handed the next available container.

In effect a coarse-grained level of parallelism is supported. The test platform intentionally leaves fine-grained control over parallelism to the framework of choice – i.e. it composes over it. Both levels parallelism can co-exist.

The feature is OFF by default.

The .runsettings file is the artifact used to configure how the tests get run, and is common in the IDE, the CLI, and the VSTS workflows. The feature can be turned ON by authoring a .runsettings file with an entry for MaxCpuCount, and associating that with the test run. 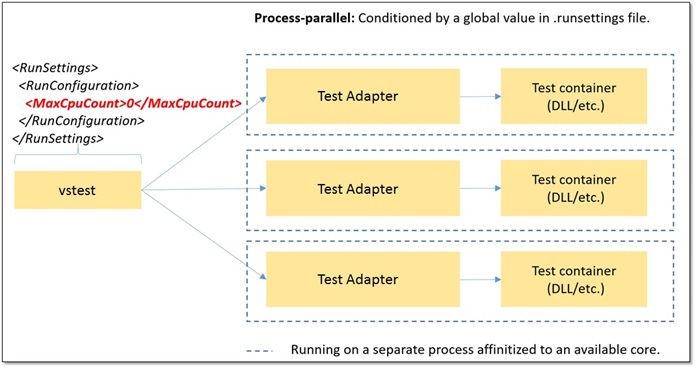 The value for MaxCpuCount has the following semantics:

Typically, a value of 0 indicates that up to all of the available free cores may be used.

As mentioned earlier, not all test code already written might be done so in a manner that is parallel-safe. For pure unit tests, it should just work. For other kinds of tests, you will need to experiment a little to see if they are assuming exclusive use of global resources, and refactor/rearrange them appropriately. In general, the following iterative approach may be used to leverage the feature:

Gradually evolve the partitioning as follows: a) Run the tests in parallel, and see what tests fail and classify them into (2) or (3) above. b) For tests in (2), fix them so that they can run in parallel. c) For tests in (3), move them out into a separate test run (where parallel is OFF by default).

Parallel Test Execution is not supported in the following cases: (1) If the test run is configured using a .testsettings file. (2) It is not supported for test code targeting the Phone, Store, UWP application platforms.

How the feature evolved at Visual Studio Update 2

We received feedback that enabling parallel test execution using .runsettings was not very discoverable. Also, it is likely that some tests might fail when run in parallel, and our guidance on how to leverage the feature required the user to be able to separate out such tests in an iterative manner – an exercise that would require switching between parallel and non-parallel execution multiple times during one or more sessions. Therefore, we evolved the feature along the following lines:

Starting with Visual Studio 2015 Update 2, we added the following alternative ways to enable Parallel Test Execution in the IDE, CLI and VSTS:

IDE Parallel Test Execution is surfaced as a button on the Test Explorer.

VSTS In VSTS, “Execute Tests in Parallel” is surfaced as a checkbox in the VSTest task. 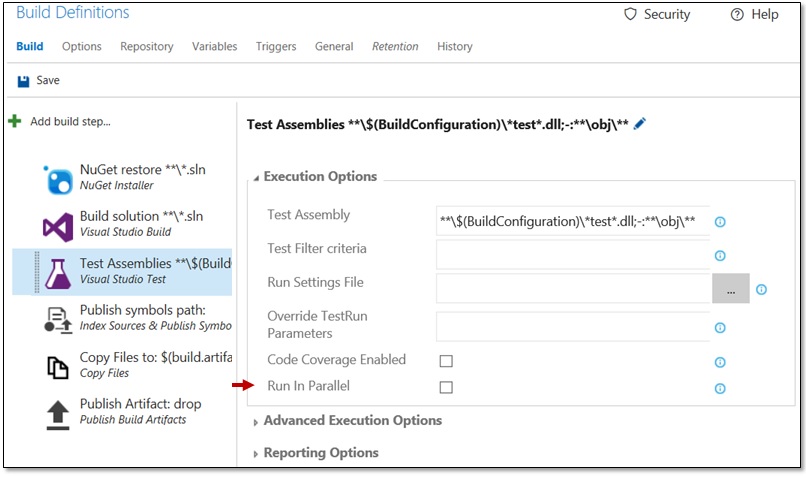 But what if you already had a .runsettings file with MaxCpuCount? Well, the following tables summarize how the .runsettings will be merged:

Parallel Test Execution is one of the key features we have shipped as part of the “Efficient Execution” theme, and we hope that this post has shed some light on the considerations that shaped it.

We are eager to know more about your experience with using this feature. Your inputs have informed the evolution of this and other features in the Test Plattform, so please keep the feedback coming. – post them as comments on this post, or using Visual Studio’s “Report a Problem”/”Provide a Suggestion” feature, or using connect, or twitter.

Looking forward to hearing from you.