Do not change Linux files using Windows apps and tools

Update – May 2019 Windows 10 version 1903 has now been released and allows an important update to WSL that allows Windows applications and tools to access Linux files directly. To do this, WSL hosts a new 9P fileserver, which exposes distro filesystems to Windows apps and tools via \\wsl$\<DistroName>\! You can read all about the feature in the blog post “What’s new for WSL in Windows 10 version 1903“.

The post below contains the original guidance, which also remains true: DO NOT access the Linux files inside of your %LOCALAPPDATA% folder, since you should only be accessing them . If you’d like to learn more about why you shouldn’t go digging through the Appdata folder for your Linux files, please read on!

There is one hard-and-fast rule when it comes to WSL on Windows:

DO NOT, under ANY circumstances, access, create, and/or modify Linux files inside of your `%LOCALAPPDATA%` folder using Windows apps, tools, scripts, consoles, etc.

Creating/changing Linux files in your Appdata folder from Windows will likely result in data corruption and/or damage your Linux environment requiring you to uninstall & reinstall your distro! 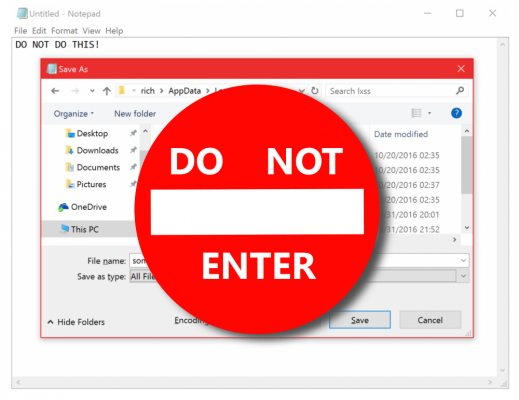 What SHOULD I do?

To work on files using both Windows and Linux tools, store files in your Windows filesystem – this will enable you to access the same files from both Windows and from your Linux distros via /mnt/<drive>/<path> (e.g. /mnt/c/dev/project/...),

When you access files on your Windows filesystem from within Bash, WSL honors the NT filesystem behaviors (e.g. case-insensitivity), permissions, etc. so you can easily access the same files using both Windows tools and Bash tools without having to copy files back and forth between filesystems.

Therefore, be sure to follow these three rules in order to avoid losing files, and/or corrupting your data:

It’s WSL’s job to write/update Linux file metadata for all the files under your Linux filesystem root (i.e. /), storing the Linux metadata in each file’s NTFS extended attributes. WSL also synthesizes pseudo metadata for most of the files in your Windows filesystem.

The problem arises when, for example, you use a Windows app/tool to open, create and/or modify a file under your distro root: Since the file was created with a Windows tool, the file won’t have any Linux file metadata (e.g. permissions, owner, access/update timestamps, etc.). Thus, to Linux, (which only receives Linux file metadata), the file may be reported as empty, may not even exist, or may have some metadata, but that metadata may not reflect the file’s details resulted in the file’s contents being corrupted.

Further, as in Linux, some Windows tools implement unusual filesystem access patterns to handle file updating and don’t actually edit files in-place: When apps/tools save changes to a file, the original files are often deleted and re-created, etc. During such operations, NT file “extended properties” (i.e. Linux file permissions) are often not copied and are “lost”.

For more background into how the WSL filesystem infrastructure works, be sure to read/watch this AWESOME blog & video which explains things in much more detail.

Rumors of Cmd’s death have been greatly exaggerated
This post is in response to a story published on December 6th 2016 by ComputerWorld titled "Say goodbye to the MS-DOS command prompt" and its follow-up article "Follow-up...