The next Windows update is coming soon and we’re bringing exciting new updates to WSL with it! These include accessing the Linux file system from Windows, and improvements to how you manage and configure your distros in the command line.

In the past, creating and changing Linux files from Windows resulted in losing files or corrupting data. Making this possible has been a highly requested and long anticipated feature. We’re proud to announce you can now easily access all the files in your Linux distros from Windows.

Linux Files inside of File Explorer

The best way to get started with this feature is to open your Linux files in File Explorer! To do this, open your favorite distro, make sure your current folder is your Linux home directory, and type in:

This will open a File Explorer window, showing the files located inside of your Linux distro’s filesystem: 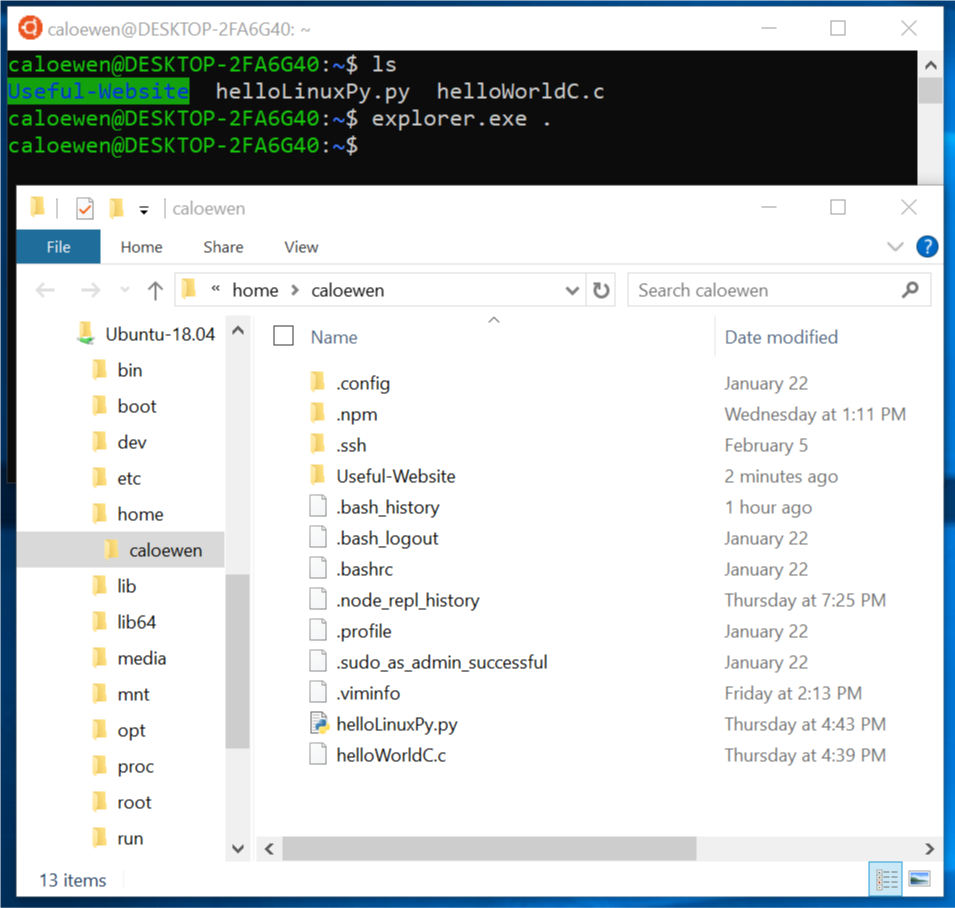 From here you can access whatever Linux files you would like, just like you would any other file through File explorer. This includes operations such as: dragging files back and forth to other locations, copy and paste, and even interesting scenarios like using the context menu to open VSCode in a WSL directory! 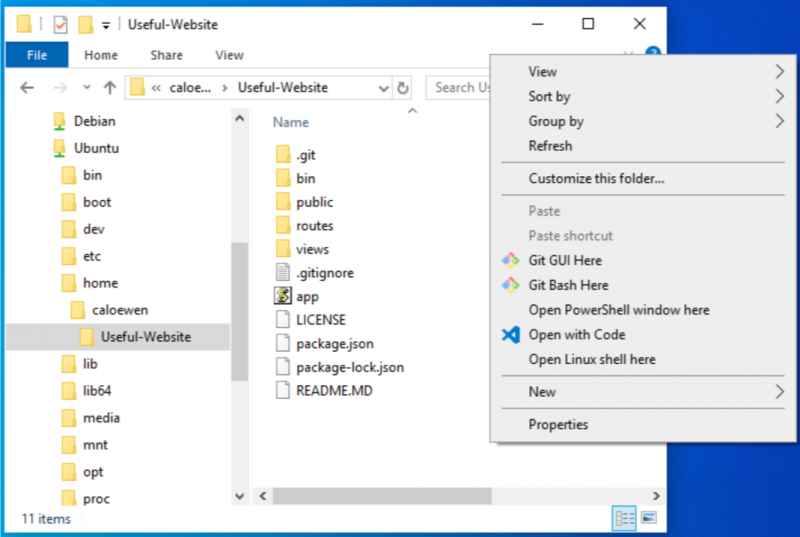 When using this feature you’ll notice the distro files are exposed through the path: \\wsl$\

WSL is primarily a command line tool, and so of course this feature also works in the command line. You can find your distro’s files by accessing \\wsl$\{distro name}\ where {distro name} is the name of a running distro. Here’s what it looks like to access Debian with PowerShell. 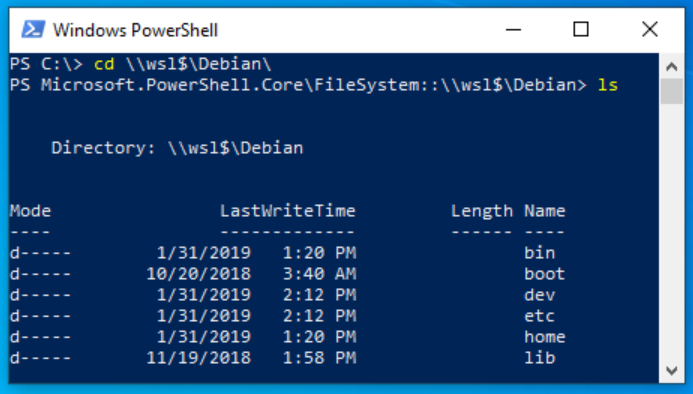 To put it briefly: a 9P protocol file server facilitates file related requests, with Windows acting as the client.

We’ve modified the WSL init daemon to initiate a 9P server. This server contains protocols that support Linux metadata, including permissions. A Windows service and driver that act as the client and talks to the 9P server (which is running inside of a WSL instance). Client and server communicate over AF_UNIX sockets, since WSL allows interop between a Windows application and a Linux application using AF_UNIX as described in this post.

This is a new feature, and some pieces of it may not work perfectly. Here are some known issues that we want to make you aware of when using this feature:

Where to file feedback

Our team is keen to hear your feedback. In fact WSL itself was created based on our great community feedback! Please file any issues you that you may find on our Github page: https://github.com/Microsoft/WSL and we will do our best to address them.

We can’t thank the community enough for helping make WSL an amazing tool!

We’ve also improved the command line experience in this latest update by consolidating our commands to wsl.exe and adding more command line functionality. You can now use wsl.exe to perform all the necessary commands you would need to configure and control WSL on your machine. You can always check all the commands you can run from wsl.exe by running wsl.exe –help

We’ve also added some new commands that will give you more functionality when using wsl.exe.

You can now run commands as different users, terminate running distributions, and even export and import different distros! Exporting a distro is accomplished by passing in –export as an argument and will output a tar file of your current distro. For example, you could use this functionality to share your distro setup with other people. Additionally, if you pass in –import as an argument you can import a tar file that contains the root file system of a Linux distro, which allows you to import any distro you’d like, with any configuration you’d like.

Here is the full list of commands that we’ve added to wsl.exe.

The commands that existed inside of wslconfig.exe have been added to wsl.exe to allow you to configure your distros more easily. Our goal is to consolidate how you interact with WSL to a single binary.

The Windows Console team has also made some improvements that you’ll notice when using WSL. The Console team will soon post an update of what’s new in Windows 10 version 1903. Stay tuned!

As always, we want to thank you for providing your feedback and encourage you to keep doing so! You can file issues on our Github at Microsoft/WSL or reach out to Craig Loewen @craigaloewen on Twitter.

We’re looking forward to seeing the fantastic work that you’ll do with this update.

Announcing WSL 2
Today we’re unveiling the newest architecture for the Windows Subsystem for Linux: WSL 2! Changes in this new architecture will allow for: dramatic file system ...

Craig Loewen
May 6, 2019
112 comments
Shipping a Linux Kernel with Windows
Beginning with Windows Insiders builds this Summer, we will include an in-house custom-built Linux kernel to underpin the newest version of the Windows Subsystem for ...