This blog post shows how you can deploy an application from Visual Studio Team Services to Azure Virtual Machine Scale Set.  An application running on a VM Scale Set is typically deployed in one of the two ways:

Creating a custom image approach, also known as immutable deployments has its advantages. It is predictable, as you are promoting the image which you have already tested. It is also easy to scale and makes rollback to a well-known previous state easier. Another important scenario is when you want to scale out, the VM extension based approach can result in a slow scale out because the extensions will run on a new VM each time it is created. If the scale set is based on a custom image, any new VM is a copy of the source custom image and the scale out will be faster as the prerequisites and application are already installed.

In this example, we will first build and test a NodeJs application and then use the new Build immutable machine image task to build custom Ubuntu 16.04 VHD image which has NGINX, PM2 and the NodeJs application installed and configured. This image can then be used for Azure Virtual Machine Scale Sets deployment.

On the Tasks or Build tab, add these steps.

On the Triggers tab, enable Continuous integration (CI). This tells the system to queue a build whenever someone on your team commits or checks in new code.

Save, queue, and test the build

Save and queue the build. Once the build is done, click the link to the completed build (for example, Build 1634), click Artifacts, and then click Explore to see the files produced by the build.

The Bake immutable image for VMSS task makes it easy for users who are new to immutable VHD based deployments to use Packer without learning concepts like provisioners and builders. If you are deploying to Virtual Machines by using deployment scripts then you can try out this task and use it for either creating new Virtual Machine instances or creating/updating Virtual Machine Scale Sets.

The auto generate mode of the task generates the packer configuration with:

A custom packer configuration json can also be used.

The entire build and release Continuous delivery can be setup from the Azure portal as well by using the Continuous Delivery option available in the Virtual Machine scale set blade. 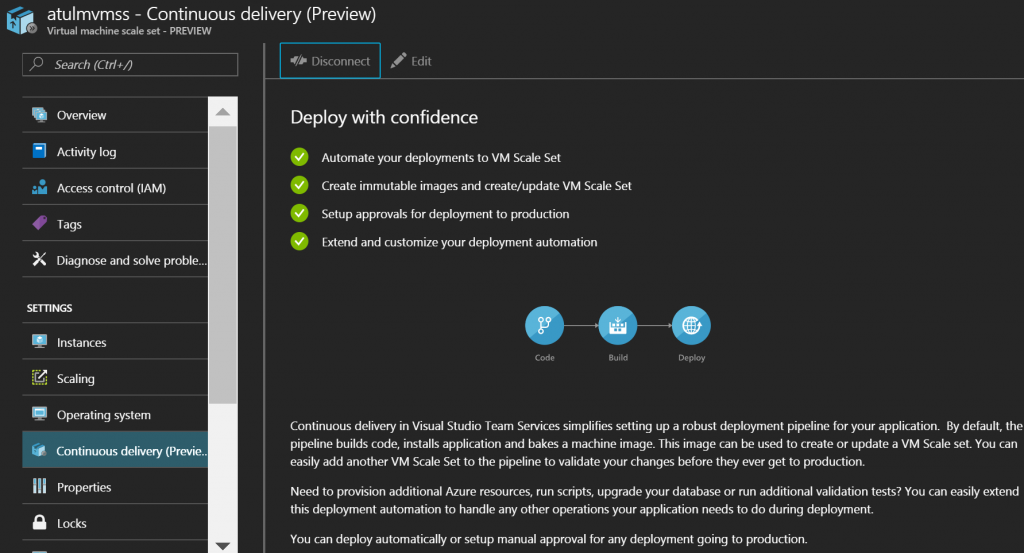 There are few things you should keep in mind while setting immutable deployments. For example:

Accelerated Continuous Testing with Test Impact Analysis – Part 2
The previous post introduced how - for a given code commit - TIA will select and run only the relevant tests required to validate that commit. Thus, without sacrificing ...

Pratap Lakshman May 16, 2017
0 comment
Global DevOps Bootcamp June 17th
On June 17th 2017, the always awesome community of individuals passionate about DevOps on the Microsoft stack are coming together in a series of meet-ups around the world...