Data Binding Tips and Tricks for iOS, Android, and Windows

Utilizing data binding in Xamarin.Forms applications can greatly simplify application development by automatically synchronizing app data to the user interface with very little work. Previously, we took a look at setting up your project to begin data binding and then saw it in action in an app.

In this blog post, I’m going to explore more advanced data binding scenarios where values are formatted and converted as they are passed between source and target by the binding engine.

While data bindings are most often used to synchronize a UI with an underlying data model, they can also be defined to link properties of two controls on the same page. This is achieved by setting the BindingContext of the target object using the x:Reference markup extension, as demonstrated in the following XAML code example from the sample application:

The Slider contains an x:Name attribute that is referenced by the two Label instances, using the x:Reference markup extension. This binding extension defines a property called Name to set to the name of the referenced element, in this case slider. However, the Name property is not explicitly required and is omitted here. The Value property of the Slider is bound to from both the Rotation property of the Image and the Text property of the Label. Therefore, as the slider is moved, the Image rotates and the Label is updated with the rotation angle, as shown in the following screenshots: 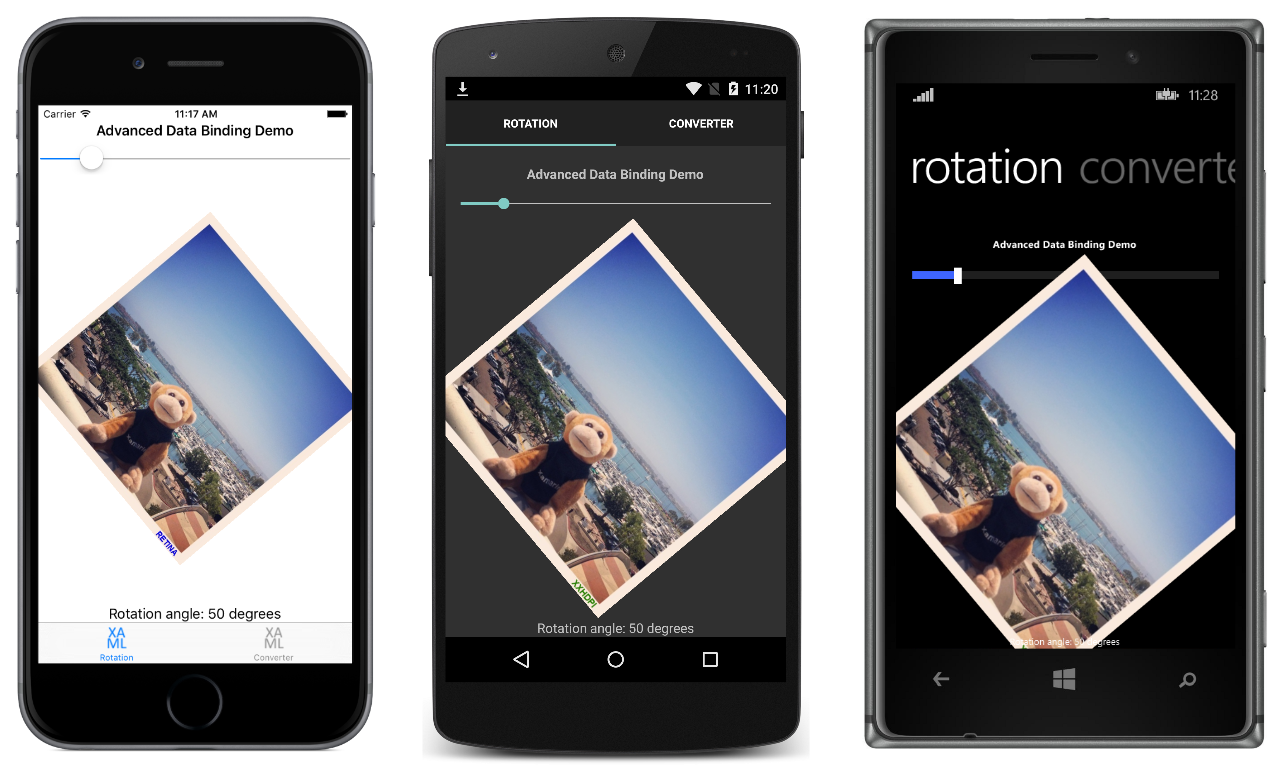 While string formatting can be used to format the data returned from a source object, it can’t be used to perform type conversions. This is the role of value converters. A value converter is a class that allows you to change the format of data as it’s passed between source and target by the binding engine. This is achieved by the class implementing the IValueConverter interface, which requires you to implement Convert and ConvertBack methods.

The following code example shows the IntToBooleanConverter, used in the sample application, which returns a boolean value based on a comparison of two integer values:

The Convert method is called whenever a value passes from the source to the target. The value argument to Convert is the value from the source to be converted. The targetType argument is the type of the target property, and the Convert method should return an object or value that matches the targetType. The parameter argument is an optional conversion parameter that can be specified as a property to the Binding markup extension. Finally, the culture argument can be used if you need to perform a culture-specific conversion. The IntToBooleanConverter returns true if the value from the source is greater than or equal to the value of the parameter argument, otherwise it returns false.

Similarly, the sample application also contains an IntToColorConverter, which returns one of two colors depending on a comparison of two integer values.

In XAML, value converters are usually instantiated in a ResourceDictionary and then referenced in a Binding expression by using the StaticResource markup extension. Because value converters don’t maintain state, a value converter instance can be shared amongst multiple bindings.

The following code example demonstrates the use of value converters in the sample application:

The IntToBoolConverter is instantiated in the page’s ResourceDictionary and referenced in the Binding expression set on the IsEnabled property of the Button. It’s used to enable the Button only when a minimum of ten characters have been entered into the Editor. Similarly, the IntToColorConverter is used to set the color of the number of characters that have been entered into the Editor to green when there’s a minimum of ten characters, otherwise it sets to red. The screenshots below demonstrate this functionality: 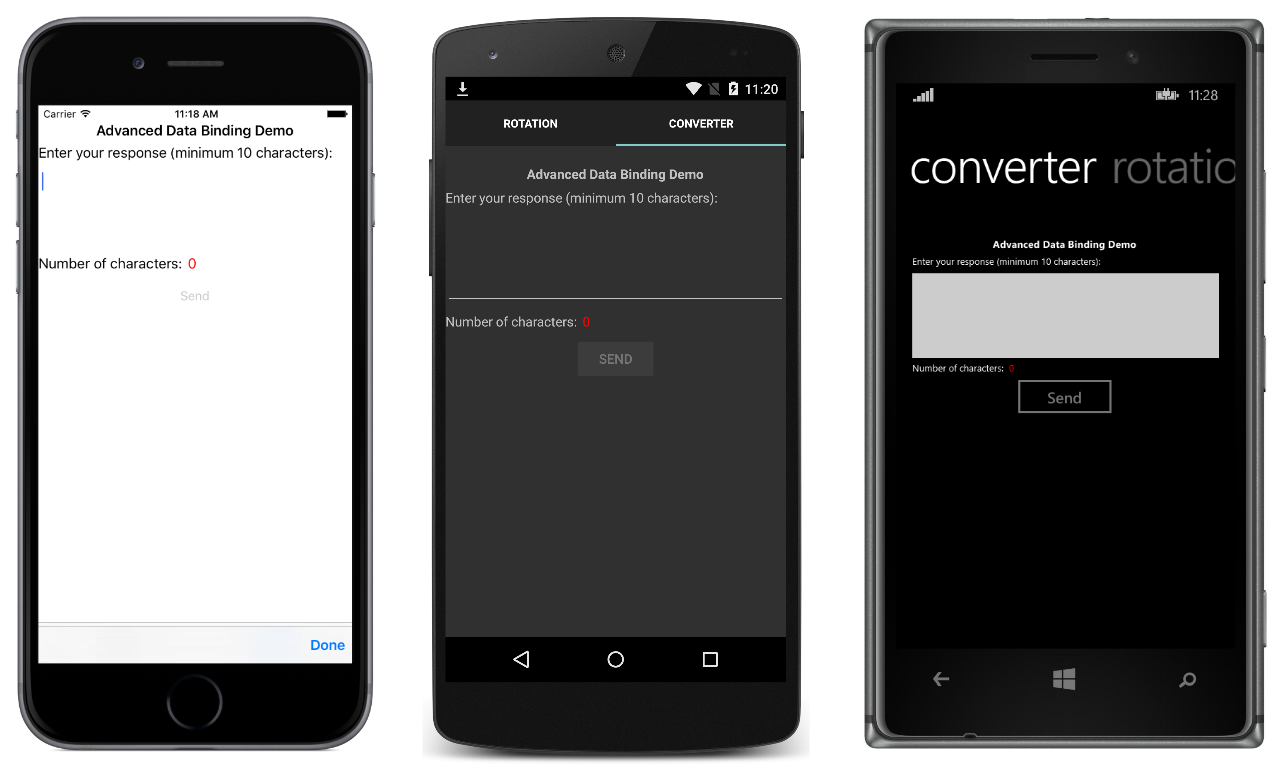 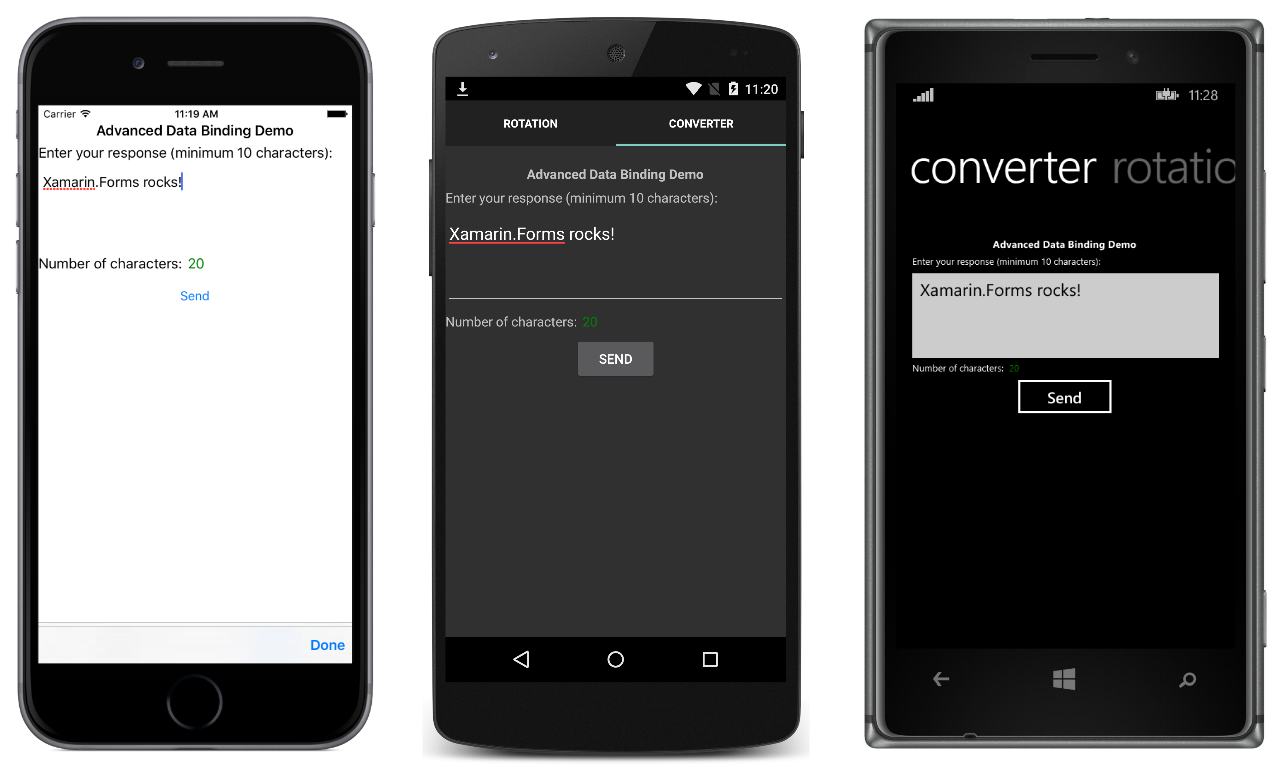 Note that if only one instance of a value converter is being used, it doesn’t need to be stored in a ResourceDictionary. Instead, it can be instantiated directly in the Binding. For more information, see From Data Bindings to MVVM.

While data bindings are most often used to synchronize a UI with an underlying data model, they can also be defined to link properties of two views on the same page. This is achieved by setting the BindingContext of the target object using the x:Reference markup extension.

In Xamarin.Forms, bindings do not perform any implicit type conversions. String formatting can be used to format data returned from a source object, and value converters can be used to change the format of data as it’s passed between source and target by the binding engine.

Xamarin’s Newest Most Valued Professionals
With the new year comes exciting new changes, and for our community, that means lots of new Xamarin MVPs! These are rockstars who have earned recognition for signi