Today, we’re excited to announce the Preview 3 release of Visual Studio 2019 for Mac. This is the next release of our IDE for .NET Developers on the Mac. You can download it now or use the in-product update feature if you already have a previous preview release installed. To update, simply use the Visual Studio > Check for Updates… menu! In this release, we’ve put all our energy toward addressing common issues raised by developers in our community. Your feedback is coming through loud and clear – you want a solid IDE experience that is reliable and helps you focus on getting your work done in a quick and high-quality way.

This release focuses on improving the core of Visual Studio for Mac. Major highlights of this release include:

In addition to the above, we’re excited to introduce a first preview of the new, fast, fluid, and performant C# editor, built on top of the same core editor as Visual Studio on Windows.

In this post, we’ll focus on a few of the top requested changes – launching multiple instances, debugging with Unity, and the new C# editor. Please, take a look at the release notes to learn more about all of the changes included in this release.

To open a new window/instance of the Visual Studio for Mac IDE, you can now right-click on the app icon in the dock and choose a the New Instance menu. When working on large projects, it can be common to open up multiple solutions at one time, either to work on different parts of a project or perhaps temporarily open up some sample code. Visual Studio for Mac has support for opening multiple solutions in one window, and we’ve heard a lot of requests to support multiple windows for the IDE. Let us know how this works for you!

Xamarin developers should find a ton of improvements in this release with generated Android apps now smaller and faster and a generally improved development loop for Android developers. Some of the new highlights include:

You can learn more about these improvements over on the Xamarin blog.

Visual Studio for Mac is the default IDE for Unity development on the Mac. Until this release, we’ve had different debuggers for the Unity tools on the Mac and on Windows. With the Preview 3 release, we replaced the debugger on the Mac with the same core Unity debugger from Windows. Beyond making it easier to apply bug fixes across both products at the same time, this new debugger provides better compatibility with older versions of Unity and a better experience when debugging unsafe C# code.

We’ve been working on this for a while, and we’re delighted to announce the first preview of our new code editor experience. The new editor builds on a solid foundation provided by the Visual Studio editor on Windows, with native macOS UI added to make sure it feels right at home on a Mac. Not only does this provide an enhanced experience with smooth editing and navigation, but the new editor also has all the powerful IntelliSense/code-completion and quick fix suggestions you expect from a Visual Studio Editor. Plus, as the editor is truly native, you get all the benefits of a modern macOS editor, including several top features such as right-to-left and bi-directional text support and full support for native macOS input sources, which makes VS for Mac an IDE that speaks your language.

The new editor is currently a preview feature and is disabled by default for now. We need your feedback as we continue to refine and stabilize the feature! To enable the new editor, navigate to the Visual Studio > Preferences… menu, Text Editor > General section and check the Open C# files in the New Editor checkbox. You can also toggle other experimental features like “Word wrap” from this dialog. 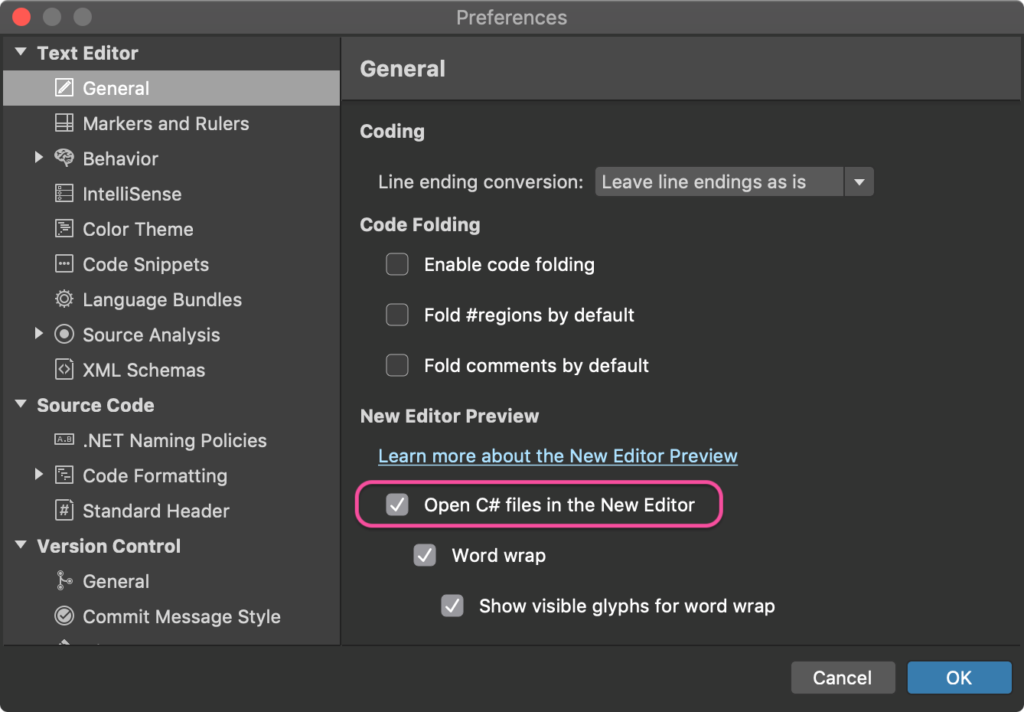 Your code is the “star of the show” and a good editor is all about helping you improve and refine that code. It should be smooth as you type, help you quickly iterate and refactor your code, and help increase your effectiveness when writing code over time. The new editor helps you out here by:

Here’s a quick look at the new multi-caret editing support, which builds on the same support available to you in Visual Studio on Windows.

A long-standing favorite of developers using Visual Studio, IntelliSense (auto code completions) has received a new look in this release of the editor, as well as numerous changes to help write your best code. Some of the big improvements include:

An IDE that speaks your language

Visual Studio for Mac is an IDE loved and used by developers all around the world. With the new editor, we can now provide proper support for bi-directional languages mixing in left-to-right and right-to-left text. We can also use native macOS editing capabilities for typing accented and special characters. Language improvements provided by the new editor include:

Check out the following example, showing how you can use native macOS input controls to insert text using different languages, plus an all-important emoji. 😉

We developers, usually spend more time exploring code bases, navigating through our existing code, and refactoring rather than writing brand new code. For this, we need a reliable and easy to navigate IDE. With the new preview editor, we’ve focused on replacing the existing Find and Replace functionality in the editor, so it is more intuitive and discoverable. With this new dialog, you can now:

Try the preview today, and please share your thoughts!

We encourage you to download and try out the release today! Our aim is to make .NET development on macOS a breeze, and this release is our next step on this journey. Check out our recently updated product roadmap to see what we’re working on next and share your feedback and suggestions! We strive to be 100% driven by customer feedback and we love to hear from you.