This latest preview contains new features, productivity improvements, and other enhancements that address our customers’ feedback. Read the feature highlight summary below, and check out the Visual Studio 2017 version 15.6 preview release notes for a more detailed description of what’s new and how to use the new goodness contained in this Preview.

The CPU Usage tool (available during F5 Debugging in the Diagnostic Tools window and in the ALT-F2 Performance Profiler) now displays source line highlighting based on the CPU consumption of specific lines of code. When you view the Call Tree or Caller/Callee views of the CPU Usage tool, the source for the selected function is displayed with CPU consumption indicated on each source line of the function. If CPU performance of a function is a concern, now you can determine specifically what source lines of the function are responsible for the CPU consumption when the function is executing. This feature requires that source information be included in the generated PDB which is controlled by the project settings. Projects for which PDBs do not have source information will be unable to display either the line attribution or the source file. 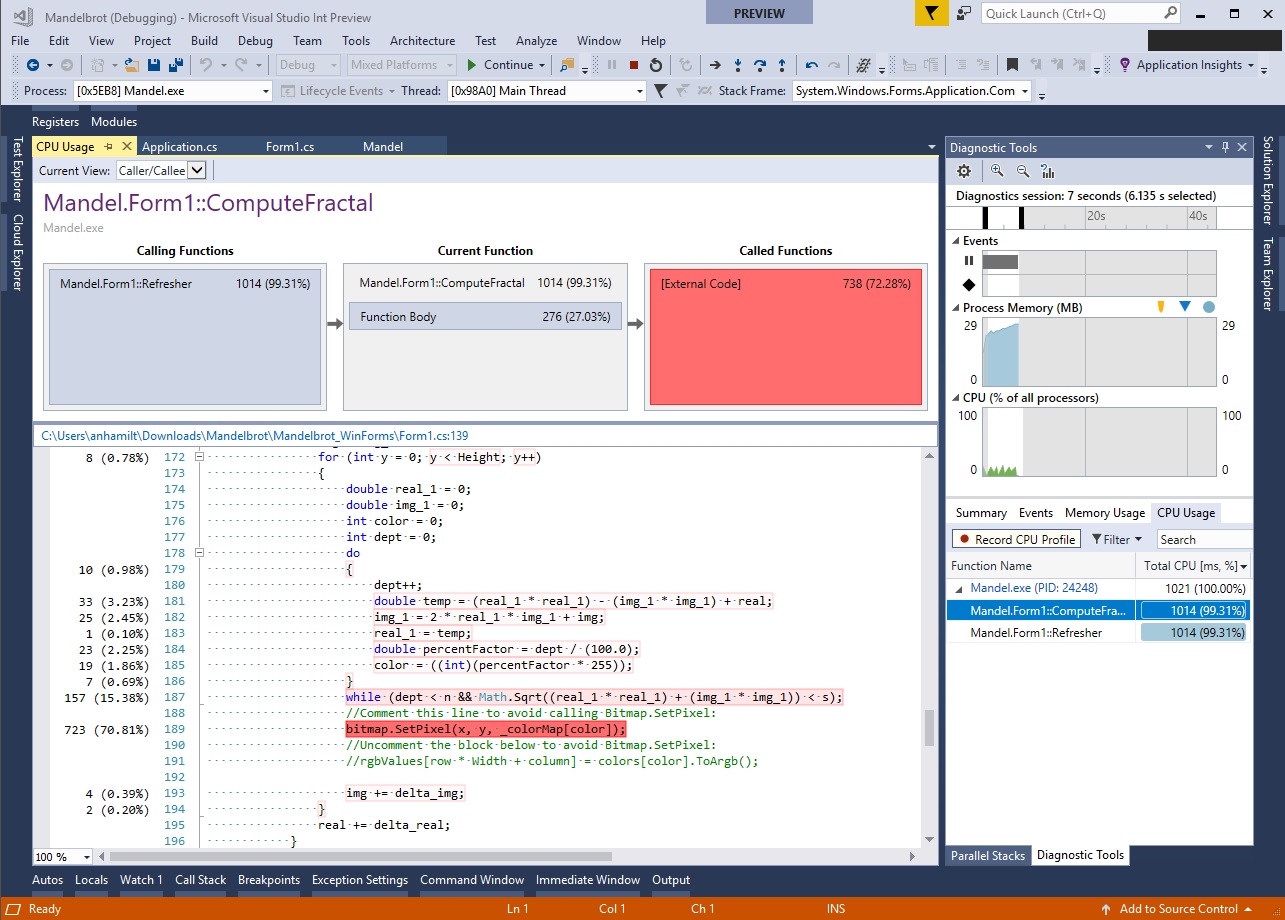 Team Explorer: In this Preview, we made some improvements to the Git tags functionality, largely based on your feedback via UserVoice. There’s a new Tags tile available in the Team Explorer window so that you can view all the tags in your repo. In addition to create, you can now delete tags, push tags, and create a new branch from tags. Visual Studio Team Services users can now check out pull request branches, which makes it easier to review pull requests, test changes, and build your code.

Managing Secrets: Many of you know that it’s a best practice to keep sensitive settings like connection strings, passwords, or other credentials outside of source code and in a safe place like Azure Key Vault. Last month we introduced the App Authentication Extension which makes it easy to configure your machine to use these protected settings so that you can develop and debug apps locally using your Visual Studio credentials. With Visual Studio Version 15.6 Preview 1, we’ve moved this functionality directly into the main setup, so now everyone has access to this feature by default. Learn more about managing secrets in the cloud.

With Visual Studio 2017 version 15.6 Preview, you now have the ability to create CMake projects the Add New Project dialog. This Preview also provides built-in support for Android NDK r15c and guaranteed copy elision per the C++17 standard. In addition, the ImageWatch extension has been updated to work with Visual Studio 2017

IntelliSense for Python code now no longer requires a completion database. Instead of waiting up to four hours after installing a new package, you can start using it immediately. We have also added experimental support for managing Anaconda packages, new code snippets, and more customizable syntax highlighting. Read our blog post for full details on these improvements and how to enable our experimental features.

Real time test discovery is a new Visual Studio feature for managed projects that uses the Roslyn compiler to discover tests and populate the Test Explorer in real-time without requiring you to build your project. This feature was introduced behind a feature flag in version 15.5, and it will now be on by default in version 15.6. This feature not only makes test discovery significantly faster, but it also keeps the Test Explorer in sync with code changes such as adding or removing tests. Since real-time discovery is powered by Roslyn, it is only available for C# and Visual Basic test projects using xUnit, NUnit, and MSTest. To learn more, check out the Real Time Test Discovery blog post and Channel9 video.

The WCF Web Service Reference connected service provider now supports updating an existing service reference. This simplifies the process for regenerating the WCF client proxy code for an updated web service. To use this new feature, open the context menu of a service reference folder to be updated and select the ‘Update Microsoft WCF Web Service Reference Provider…” option. This will regenerate the Reference.cs file using the settings for which the file was originally generated. Please note, this feature is not supported for service references added to the project using a previous version of Visual Studio 2017. 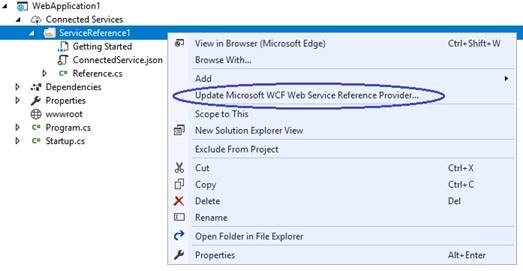 Please Install the Visual Studio 2017 Preview today, exercise your favorite workloads, and tell us what you think. You can report issues to us via the Report a Problem tool in Visual Studio or you can share a suggestion on UserVoice. You’ll be able to track your issues in the Visual Studio Developer Community where you can ask questions and find answers. You can also engage with us and other Visual Studio developers through our Visual Studio conversation in the Gitter community (requires GitHub account).

Share UI Code in any iOS and Android App with .NET Embedding
One of the most exciting announcements during this year’s Connect(); event was the ability to embed .NET libraries into existing iOS (Objective-C/Swift) and Android (...

James Montemagno
December 11, 2017
1 comment
Sky’s the limit with Azure, ASP.NET Core, and Visual Studio for Mac
[Hello, we are looking to improve your experience on the Visual Studio Blog. It will be very helpful if you could share your feedback via this short survey that should ...