If you’re one of the thousands of developers who followed our previous CTPs, you’ll find a lot of familiar features. The release candidate includes all the same experiences that make Visual Studio a great dev environment – including simple setup, contextual Intellisense, a tight edit-debug loop, connection to back-end services and a fast Android emulator – but there are also some important changes based on user feedback that we think you’ll like. This post reviews just a few, but you’ll have to download the tools to experience them all.

After trying previous CTP releases, many of you told us that you prefer the productivity of an IDE, but still need the portability afforded by a “stock” Cordova project. Some of you work on teams with mixed development environments. Consequently, there is often a need to open the same project on both Macs and PCs. Others wanted to take advantage of the rich Cordova development community where tutorials and help documents were “just a little different.”

Beginning with this release, the Tools for Apache Cordova share a common project system with ASP.NET 5. This project system is based on the file system and maps precisely to the “stock” Cordova directory structure. Build is federated almost entirely by Node.js and the Cordova framework. All these changes bring to the following benefits – 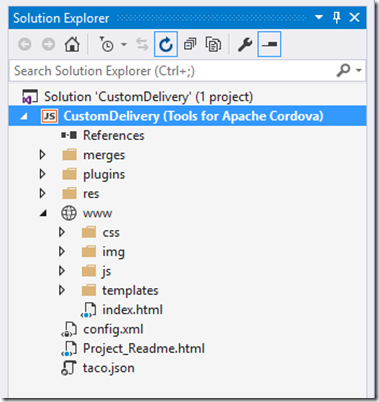 Starting with the RC release, it’s also much easier for you to build Cordova apps using tools familiar to many web developers. Do you use NPM or Bower for package management on a daily basis? No problem. You can use them for Cordova projects, too. Are you a fan of Node-based build-task managers like Grunt or Gulp? Done and done. In fact, we even have a growing library of tutorials designed to help you get started using Gulp with Cordova projects. Learn how Gulp can enable continuous integration with TFS or just perform common Gulp tasks.

Like any technology, Cordova development has its share of challenges, and one of the biggest is UI development. It can be difficult to create controls that feel native and perform responsively. Luckily, there are some terrific JavaScript frameworks that make it easy. Two of the most popular are Ionic and Onsen UI. Starting today, we’re happy to announce templates straight from the makers of Ionic and Onsen UI are available in the VS Gallery. Each framework provides a variety of starting points to suit the most common project types. 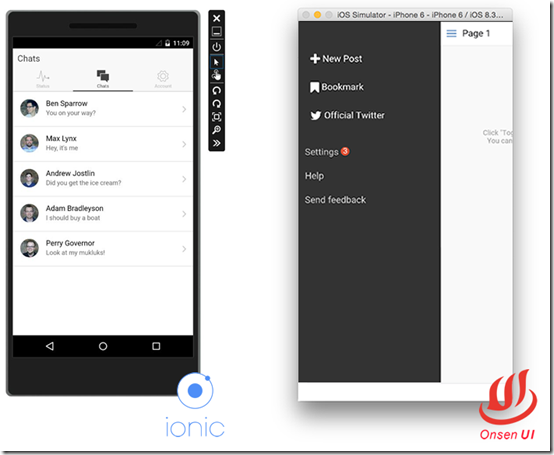 Of course, if Ionic or Onsen UI aren’t your thing, you can still bring your favorite JavaScript or TypeScript framework with you. Ionic and Onsen UI templates are provided as optional, but are strong starting points for those of you who want to defer the complication of UI so you can begin writing your application logic immediately. In fact, you can see how other frameworks do it by checking out our samples for Angular, Backbone and WinJS.

If you clicked on the Gulp tutorial link above, you may have noticed that our tutorials and Cordova app samples have moved to GitHub. We hope that the move to GitHub makes it easier for everyone to contribute and use. If you find any issues with our samples or tutorials, send us a Pull-Request or open a GitHub issue. We invite and look forward to your participation so we can grow stronger as a whole.

We are excited for you to tryout Visual Studio 2015 Tools for Apache Cordova and we look forward to seeing your feedback. You can share your feedback directly with the product team via UserVoice, Send-a-smile, Twitter, StackOverflow, or email.

Download VS Enterprise 2015 RC in English to get started right away (or go here for other languages and editions) and don’t forget to check “Tools for Apache Cordova” during setup.

Visual Studio Blog
May 4, 2015
0 comment
Top News from April 2015
This top trending post is a collection of what we think are some of the top stories in April. This is our third such post (top news from February 2015, top news from ...