Live Unit Testing is present in the Enterprise edition of Visual Studio 2017 and it’s available for C# and VB projects that target the .NET Framework. [UPDATE 5/23/2017 : We now also support .NET Core Framework. Check out this post announcing .NET Core 2.0 Preview 1 to learn about it.] This is a more comprehensive blog than the one we published in November. In this blog, we focus on all capabilities including some that were not mentioned in the earlier blog. It also includes an updated video that demos all these capabilities. FAQs are covered as well at the end.

This is a productivity feature, which provides real-time feedback directly in the editor on how code changes are impacting your unit tests and your code coverage. This will help you maintain quality by keeping the tests passing as you make changes. It will also remind you when you need to write additional unit tests as you are making bug fixes and adding features.

The Live Unit Testing capabilities in Visual Studio 2017 Enterprise are highlighted below: 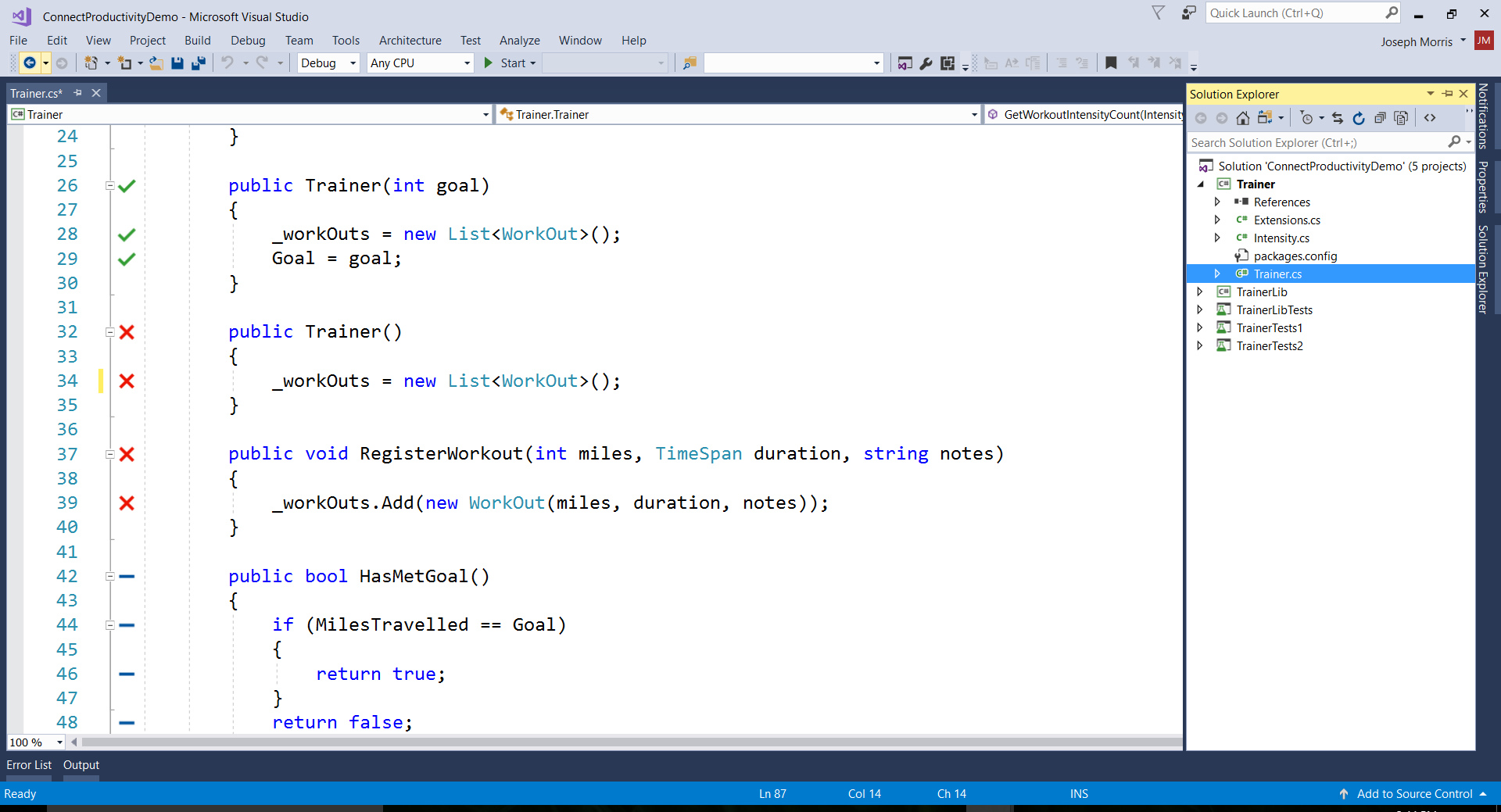 At any time, you can temporarily pause or completely stop Live Unit Testing; for example, when you are in the middle of a refactoring, and you know that your tests will be broken for a while. It is as simple as opening the Test menu, selecting Live Unit Testing, and choosing one of the following options:

View coverage information in the editor as you type

Once enabled, Live Unit Testing helps you quickly see whether the code you’re writing is covered and if the tests that cover it are passing without leaving the editor.  Unit test results and coverage visualizations appear on a line-by-line basis in the code editor.

There are three potential states for any given line:

Live Unit Testing coverage visualization is updated immediately as you modify code in the code editor. While processing the edits, visualization changes to indicate that the data is not up-to-date, as shown below. Once processing is done, it transitions to one of the final states described earlier:

At any point in time you can hover over the “✓” or “x” to see how many tests are hitting the given line, as seen in image below:

To see what tests are exercising the given line, click on “✓” or “x”.

When you hover over the failed test in the tool tip, it expands to provide additional info to give more insight into the failure:

To navigate directly to the failed test, click on it in the expanded UI.

Seamlessly debug failed test, edit and continue without having to restart

Live unit testing enables you to avoid the overhead of continuously running the unit tests for code that you aren’t touching or affecting, especially when you are dealing with a large code base. When you enable Live Unit Testing on a solution with 10 or more projects, you will see a dialog box, that gives a choice to include all or exclude all projects: 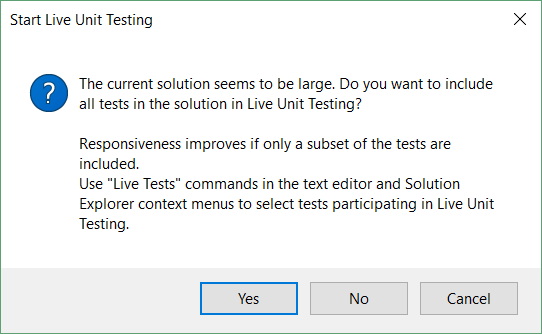 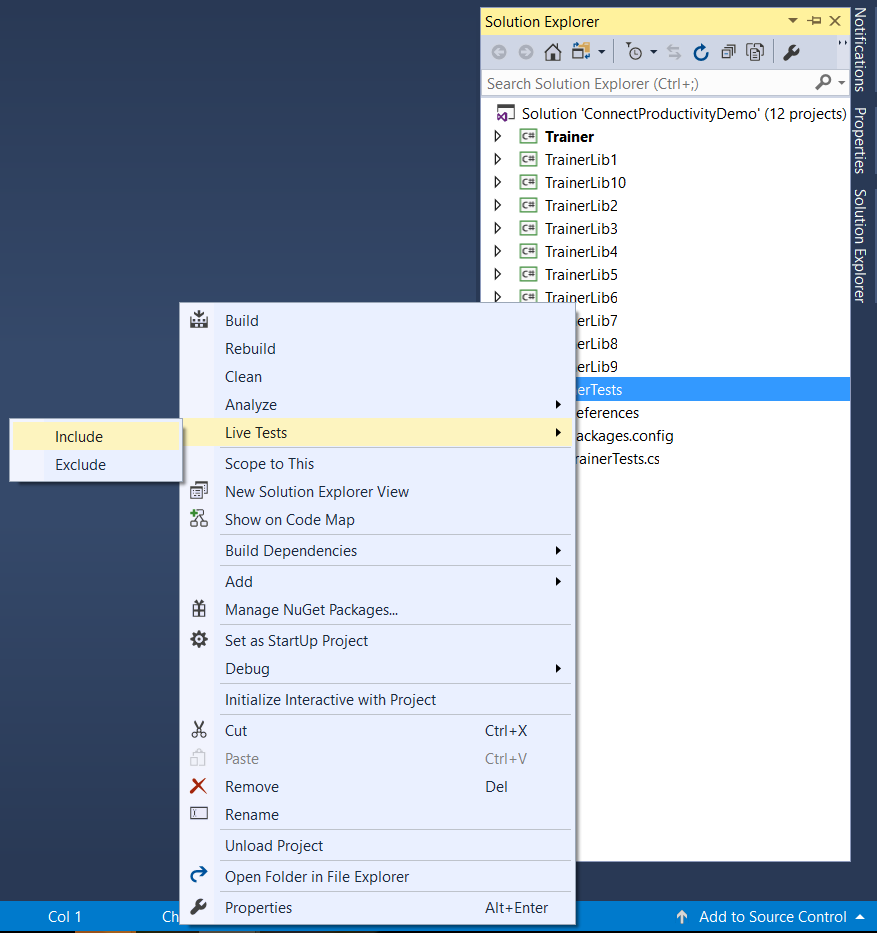 The smallest unit of inclusion in or exclusion from Live Unit Testing is a test method.

You can also include or exclude tests by right-clicking in the code editor:

The last include/exclude action always wins. If you had explicitly excluded some tests within a class and go back to it later and include the entire containing class, then all tests inside that class will get included. This includes the tests that were previously explicitly excluded.

Include/Exclude state is saved as a user setting and is remembered when a solution is closed and reopened.

See FAQs section below for more information on how to exclude tests. 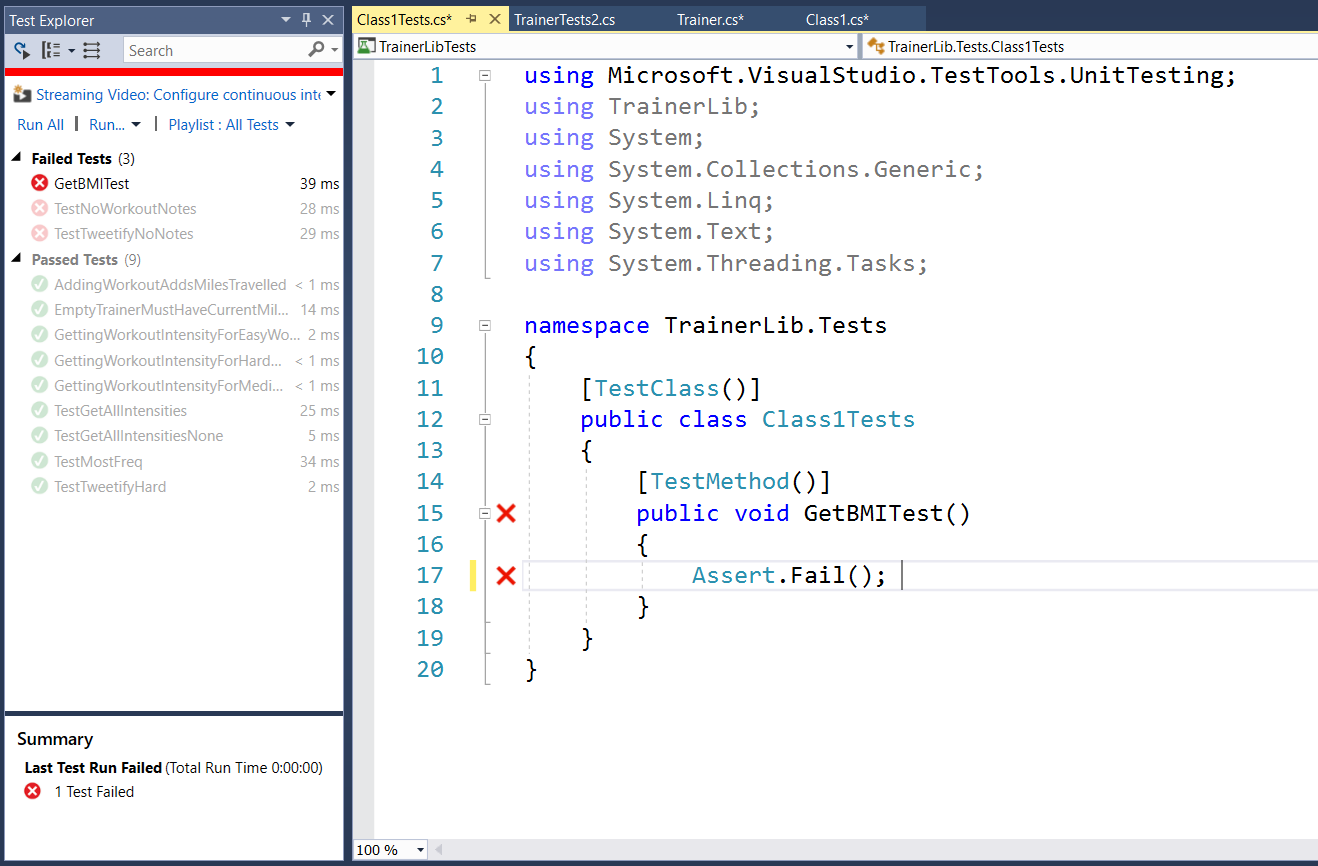 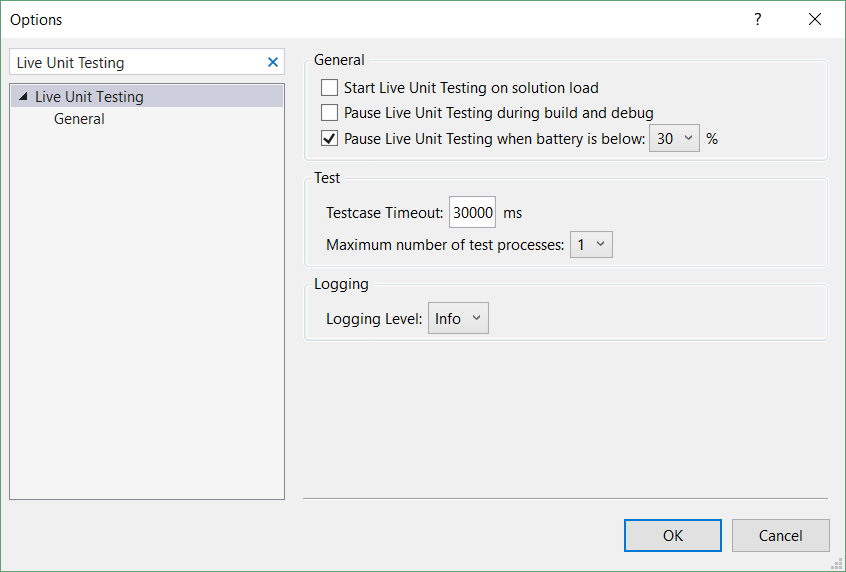 Live Unit Testing in Visual Studio works with three popular unit testing frameworks: MSTest, xUnit.net, and NUnit. The adapters and frameworks referenced in every project in the solution must meet or exceed the minimum versions given below else Live Unit Testing will give an error. You can get these from NuGet.org.

If you have older adapter and test framework references from your existing projects, be sure to remove them (make sure you remove the reference to Microsoft.VisualStudio.QualityTools.UnitTestFramework, if you are using MSTest.)  and add the new ones for Live Unit Testing to work.

You can find latest Live Unit Testing FAQs on our MSDN documentation wiki.

Q: Why doesn’t Live Unit Testing work when I turn it on?

Q: Can I customize my Live Unit Testing builds?

A: If your solution requires custom steps to build for instrumentation (Live Unit Testing) that are not required for the “regular” non-instrumented build, then you can add code to your project or .targets files that checks for the BuildingForLiveUnitTesting property and performs custom pre/post build steps. You can also choose to remove certain build steps (like publishing or generating packages) or to add build steps (like copying prerequisites) to a Live Unit Testing build based on this project property. This will not alter your regular build in any way and will only impact Live Unit Testing builds. For e.g., there may be a target which produces NuGet packages during a regular build. You probably do not want NuGet packages to be generated after every edit you make. So, you can disable that target in Live Unit Testing build by doing something like the following:

Q: Why do I get the following error when Live Unit Testing tries to build my solution “… appears to unconditionally set ‘<OutputPath>’ or ‘<OutDir>’. Live Unit Testing will not execute tests from the output assembly”?

Then you can replace it with the text below:

Do not override <OutDir> directly in your build process; override <OutputPath> instead for build artifacts to be dropped to a specific location.

Q: I want the artifacts of a Live Unit Testing build to go to a specific location instead of the default location under the .vs folder. How can I change that?

A: Set the LiveUnitTesting_BuildRoot user level environment variable to the path where you want the Live Unit Testing build artifacts to be dropped.

A: There are several differences:

Q: How do I exclude tests from participating in Live Unit Testing?

A: Please refer to include/exclude functionality mentioned above for user specific setting. This is extremely useful when you want to run a specific set of tests for a particular edit session or to persist your own personal preferences.  For solution specific settings, you can apply the ExcludeFromCodeCoverageAttribute programmatically to exclude methods, properties, classes, or structures from getting instrumented by Live Unit Testing. Additionally, you can also set <ExcludeFromCodeCoverage> property to “true” in your project file, to exclude the whole project from getting instrumented. The tests which have not been instrumented will still be run by Live Unit Testing but coverage from those will not be visualized.

You can check if “Microsoft.CodeAnalysis.LiveUnitTesting.Runtime” is loaded in the current AppDomain and disable tests based on that. For e.g. you could do something like the following with xUnit:

A: There is a known bug that may result in Live Unit Testing builds failing to embed the following Win32 PE Header data. Tests that rely on these values may fail when executed by Live Unit testing:

Q: Why does Live Unit testing keep building my solution all the time even if I am not making any edits?

Q: How does Live Unit testing work with the Lightweight Solution Load feature?

A: Live Unit Testing currently doesn’t work well with the Lightweight Solution load feature if all projects in the solution are not yet loaded. You may get incorrect coverage information in such scenarios.

Q: Why does Live Unit Testing not capture coverage from a new process created by a test?

Q: Why does nothing happen after I include or exclude tests from Live Test Set?

Q: Why do I not see any icons in the editor even though Live Unit Testing seems to be running the tests based on the messages in the output window?

Q: How do I collect more detailed logs to file bug reports?

A: You can do several things to collect more detailed logs:

Live Unit Testing will improve your productivity, test coverage and software quality. .NET developers, check out this feature in Visual Studio 2017. For developers who are part of a team that practices test-driven development, Live Unit Testing gamifies their workflow; in other words, all their tests will fail at first, and as they implement each method, they will see them turn green. It will evoke the same feeling as a nod of approval from your coach, who is watching you intently from the sidelines, as you practice your art!

Watch this Live Unit Testing video, where we demonstrate this feature: