It’s only been a week since we released Visual Studio 2017 and we’re already working on an update: Visual Studio 2017 version 15.1 Preview. This Update preview includes two main changes: improvements to the Universal Windows Platform (UWP) tools to support the Creators Update SDK and the addition of the Python tools. For full details of what’s in this preview, you can read the release notes.

A Note on Updates

Just like the released version of Visual Studio, these previews will update, so expect to see the familiar update flag in the title bar letting you know an update is ready for you to download and install.

One note about the “side by side” experience: while most of Visual Studio RTM and these Update previews will be side by side, there are some components that have only one on the system like the C runtime, the .NET Framework, and the Visual Studio installer itself. 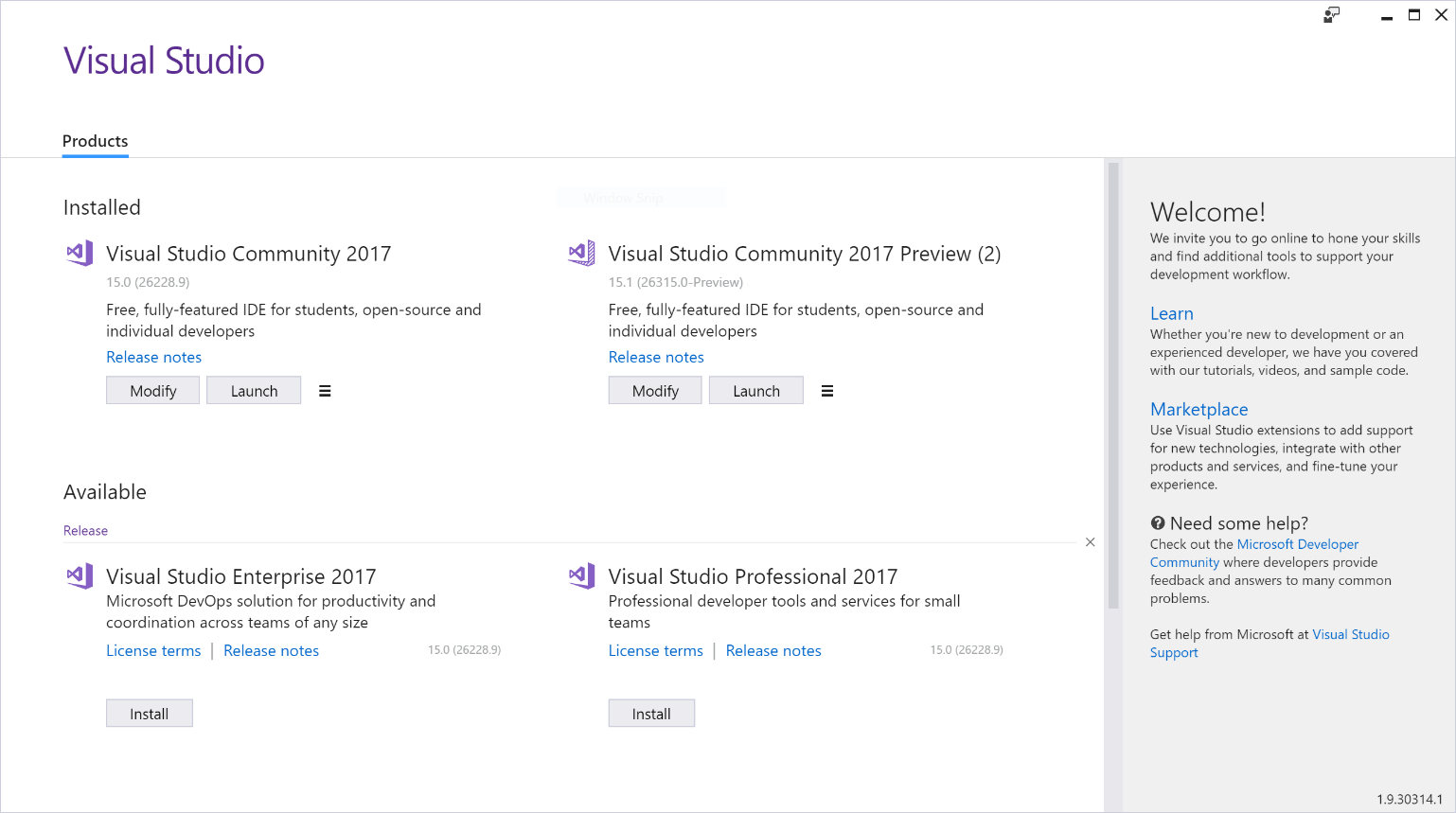 The Universal Windows Platform Tools have been updated to add support for the upcoming Creators Update SDK. We have also made several other improvements listed below.

Starting with the Creators Update SDK, we will enable side-by-side installation of the SDK. This will allow you to create production ready packages targeting the released versions of the SDK from the same machine, even when preview SDKs are installed. We hope this feature will help you to test new APIs and functionality available in preview SDKs without having to setup a separate machine. This preview version of Visual Studio 2017 will install the 10.0.15052.0 preview version of the Windows SDK. You will get the best experience if you target this SDK with Visual Studio 2017 running on Windows Insider build 15055 or later, available in the fast ring.

Please note that targeting the Creators Update SDK is only supported in Visual Studio 2017.

In the past, NuGet packages were managed in two different ways – packages.config and project.json –  each with their own sets of advantages and limitations. With the introduction of PackageReference, we have enhanced the NuGet package management experience significantly with features such as deep MSBuild integration, improved performance for everyday tasks such as install and restore, and multi-targeting.

In an upcoming preview release, new projects created in Visual Studio 2017 that target the Creators Update SDK will reference the 5.3.x Universal Windows Platform NuGet package by default, and hence take advantage of the .NET Native compiler improvements by default. Projects that target an SDK prior to Creators Update still use the 5.2.x version of the Universal Windows Platform NuGet package, and can be manually updated to the newer version. Please note that making this update means the project can no longer be built using the Visual Studio 2015 tools.

We have made several improvements across Visual Studio to have better support for NuGet packages when they contain XAML controls and libraries. The toolbox in Visual Studio now lists controls with custom icons from the NuGet package as soon as the package is added to the project. The XAML designer is also capable of extracting styles/template for such controls, as well as reading design-time metadata to enhance your productivity of working with the designer.

You can see an example of such a NuGet package here.

In this release we now detect XAML types and properties that only exist in certain versions of the SDK and show them with squiggles in the XAML editor. This lets you make an informed decision on whether the XAML you specify will work on all versions of Windows that you expect your app to run on. In future releases, we will be adding more safe-guards to the XAML authoring experience and will provide you the ability to write conditional expressions to use these properties and types in newer version of the platform.

If your app accepts activation arguments, you can now configure these values from the new Command Line Arguments property in the Debug Configuration page. The screenshot below shows this in action for C# and VB projects, but you will soon be able to do this with C++ projects as well. You will receive these values in the App.OnLaunched event in the LaunchActivatedEventArgs.Arguments property – thereby allowing you to dynamically change the execution patterns of your app (for example, running some test code). This version of Visual Studio 2017 is the first to let you create streaming UWP packages. To support streaming install in your app, you will need to create a SourceAppxContentGroupMap.xml file that defines your content groups and the files within them. From there, you can use Visual Studio to create the final AppxContentGroupMap.xml by right clicking on the project, and selecting Store -> Convert Content Group Map File. You can learn more here. This preview includes the Python development workload, which includes support for editing and debugging Python scripts and web sites, as well as iterative development using the interactive window. We want your feedback!

Go ahead and install Visual Studio Preview to start developing with the latest tools. Please keep in mind that Visual Studio Preview is for non-production development only. If you encounter any issues, please let us know using our Report-a-Problem tool to add or upvote an existing issue in our Developer Community. To make a suggestion or request to our engineering team, go to our UserVoice page.

Apply Now for Microsoft’s Go Mobile Tech Workshops
This is your opportunity to bring Microsoft engineering experts to discuss app development and architecture best practices with your team 1:1  We’re excited to ...

Visual Studio Blog
March 22, 2017
0 comment
Become a Mobile Developer with Visual Studio 2017 and Xamarin University
Millions of developers around the world use the power of C# and .NET to deliver amazing apps. Whether you’re building for desktop with Windows Forms or UWP, or for the ...