I’m excited to announce that the Data Science and analytics applications workload is available today in Visual Studio 2017. It had made a brief appearance in preview releases of Visual Studio, but had to be delayed while we completed localization and accessibility work. But now it’s once again ready for you.

The Data Science (or DS) workload brings three languages and their respective runtime distributions to Visual Studio as a single workload:

Today R and Python are two of the primary scripting languages used for data science. They are both easy to learn and are supported by a rich ecosystem of packages that address just about every scenario from data acquisition, cleaning, model training, and deployment for a wide range of domains. And F# is a powerful functional-first .NET language that’s suited for a wide variety of data processing tasks: 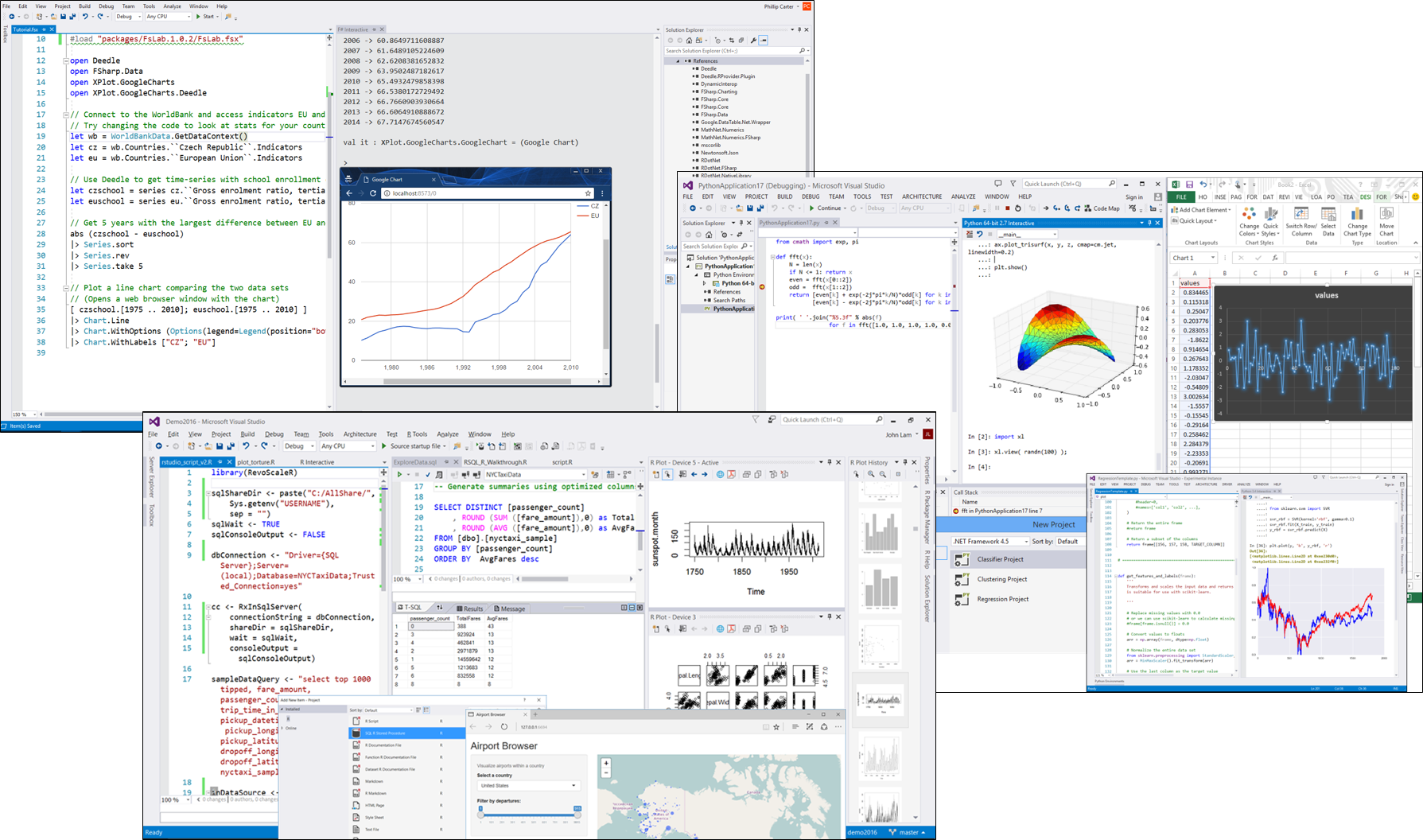 Last year we announced support for R inside SQL. We’re delighted to add Python to the list! When you install SQL Server 2017 CTP 2.0, you can select Python and a subset of Anaconda packages (for example, numpy, scipy, pandas, and more) for doing advanced analytics directly in SQL server, where your data already resides: Python support is available today for SQL Server in Windows; and stay tuned for Linux support!

R Tools for Visual Studio makes working with SQL much more productive, including adding a database connection string to your project and developing, testing and publishing SQL Stored Procedures:

Check out this short Video that goes over the R Tools/SQL integration, as well as Working with SQL Server and R in the R Tools documentation (which is now on docs.microsoft.com!).

We also provide a Free Jupyter notebook service with support for our DS workload languages. Think of Notebooks as a REPL on steroids: code, markdown, inline graphics and more. Simply hop over to https://notebooks.azure.com and click on one of the front page samples to get started: Visual Studio supports importing, running/debugging exported Jupyter .py files: simply open the file and use Ctrl-enter to advance through code cells one by one.

R, Python, F#, and their ecosystem of packages cover a wide spectrum of Data Science scenarios. The Data Science workload in Visual Studio 2017 provides all the building blocks you need to build intelligent apps immediately: from data acquisition, data wrangling, and building models, to visualization and deployment. Additionally, the integration of Python and R in SQL Server enable rich extensibility as well as avoiding unnecessary data movement by taking your code to the data. So take the workload for a spin and let us know what you think!

Visual Studio Blog
May 11, 2017
0 comment
All Things Mobile at Microsoft Build
We released the Xamarin SDKs as a part of Visual Studio a year ago, open sourcing them in the process. Since then, we've been busy improving the experience of mobile ...