Visual Studio’s native support for CMake allows you to target both Windows and Linux from the comfort of a single IDE. Visual Studio 2019 version 16.5 Preview 2 introduces several new features specific to cross-platform development, including:

Visual Studio automatically copies source files from your local Windows machine to your remote Linux system when building and debugging on Linux. In Visual Studio 2019 version 16.5 this behavior has been optimized. Visual Studio now keeps a “fingerprint file” of the last set of sources copied remotely and optimizes behavior based on the number of files that have changed.

These improvements were tested against LLVM. A trivial change was made to a source file, which causes the remote source file copy to be called and the executable to be rebuilt when the user starts debugging.

With no optimizations, a full recursive rsync copy is executed from the CMake root. With these optimizations, Visual Studio detects that a single file has changed and uses sftp to re-copy only the file that has changed.

These optimizations are enabled by default. The following new options can be added to CMakeSettings.json to customize file copy behavior.

Possible values for remoteCopyOptimizations are RsyncAndSftp (default), RsyncOnly, and None (where a full recursive rsync copy is always executed from the CMake root). rsyncSingleDirectoryCommandArgs can be passed to customize rsync behavior when a non-recursive rsync command is issued (step 3 above). The existing properties remoteCopySources, rsyncCommandArgs (which are passed when a recursive rsync command is issued, step 4 above) and rsyncCopySourcesMethod can also be used to customize file copy behavior. Please see Additional settings for CMake Linux projects for more information.

Note that these performance improvements are specific to remote connections. Visual Studio’s native support for WSL can access files stored in the Windows filesystem, which eliminates the need to copy and maintain sources on a remote machine.

Native WSL support with the separation of build and deploy

Separation of build and deploy with CMake projects

Separation of build and deploy with MSBuild-based Linux projects

By default, Visual Studio builds and debugs in WSL. To specify a second remote system for debugging, navigate to Configuration Properties > Debugging and set Remote Debug Machine to one of the specified remote connections. You can add a new remote connection via the Connection Manager. You can also specify a path to the directory on the remote system for the project to deploy to via Remote Deploy Directory. 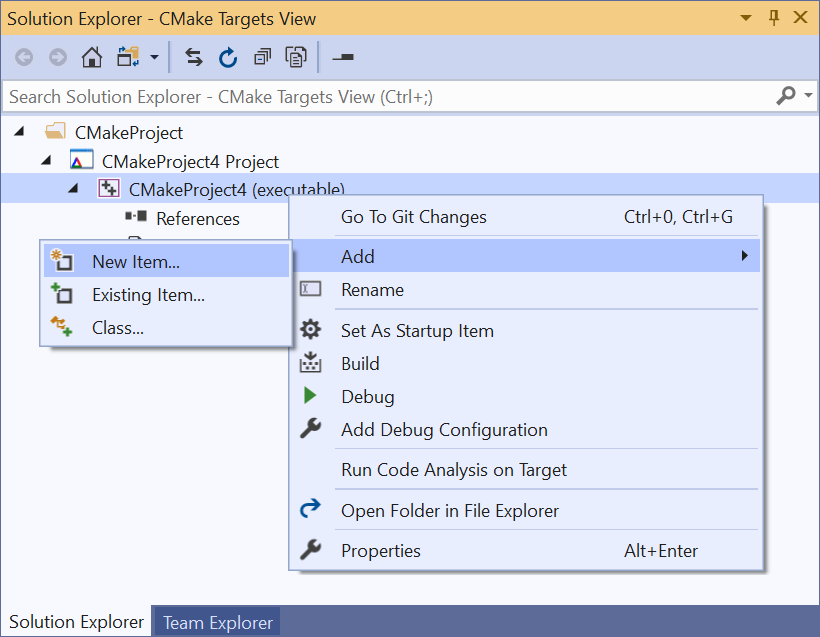 In some cases, there may be more than one place where it makes sense to add a source file to a CMake script. When this happens, Visual Studio will ask you where you want to make the change and display a preview of the proposed modifications: 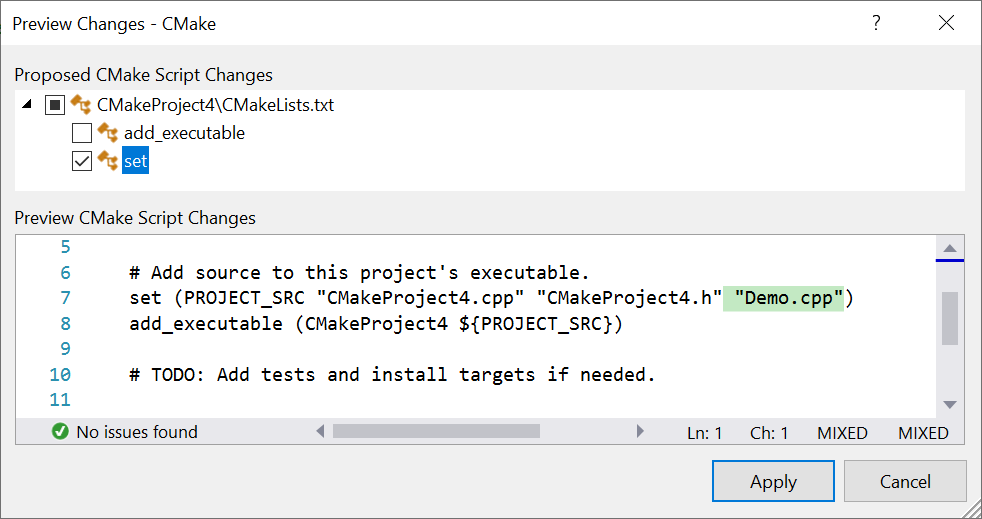 This feature is enabled by default as of Visual Studio 2019 15.5 Preview 2, but it can be turned off in Tools > Options > CMake, “Enable automatic CMake script modification…”

The latest Visual Studio preview also makes it easy to make sense of complex CMake projects. Code navigation features such as Go To Definition and Find All References are now supported for variables, functions, and targets in CMake script files. 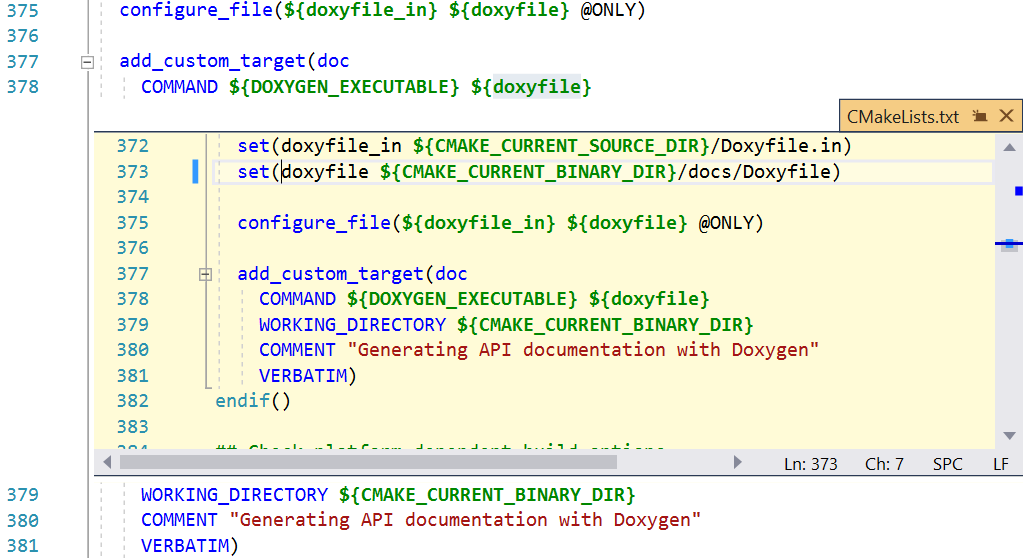 These navigation features work across your entire CMake project to offer more productivity than naïve text search across files and folders, and are integrated with other IDE productivity features such as Peek Definition. Stay tuned for more information on both CMake features in standalone blog posts coming soon.

Command line utility to interact with the Connection Manager

In Visual Studio 2019 version 16.5 or later you can use a command line utility to programmatically add and remove remote connections from the connection store. This is useful for tasks such as provisioning a new development machine or setting up Visual Studio in continuous integration. Full documentation on the utility including usage, commands, and options can be found here.

Federal Information Processing Standard (FIPS) Publication 140-2 is a U.S. government standard for cryptographic models. Implementations of the standard are validated by NIST. Starting with Visual Studio version 16.5 remote Linux development with C++ is FIPS 140-2 compliant. You can follow our step-by-step instructions to set up a secure, FIPS-compliant connection between Visual Studio and your remote Linux system.

We’ve also added the ability to toggle whether Enter, Space, and Tab function as commit characters, and to toggle whether Tab is used to Insert Snippet. Whether using a CMake or MSBuild project, you can find these settings under Tools > Options > Text Editor > C/C++ > Advanced > IntelliSense.

Download Visual Studio 2019 version 16.5 Preview 2 today and give it a try. We’d love to hear from you to help us prioritize and build the right features for you. We can be reached via the comments below, Developer Community, email (visualcpp@microsoft.com), and Twitter (@VisualC). The best way to file a bug or suggest a feature is via Developer Community.