There are over 1 billion Windows 10 and 11 devices worldwide and over 4 billion iPhone and Android devices. The numbers of users on these devices will keep on growing. Regardless of whether you are a web developer or a native app developer, you want to reach the most client devices possible with great user experiences in the most efficient way possible. To enable .NET developers to reach all these devices, we built a powerful UI framework and tools in Visual Studio that simplify and streamline the way you build beautiful client apps for any device. .NET MAUI is the most productive way to develop native apps that perform great on any device that runs Android, iOS, macOS, or Windows from a single codebase. Instead of learning different stacks and languages for each device, you can use one language, one set of libraries, and one UI stack for all of them. .NET MAUI is built on .NET 6, so that means that you get a single, unified .NET experience across workloads and project types, and high-performing apps you expect.

.NET MAUI lets you build hybrid web apps too. Blazor is for building interactive web UIs with C# instead of JavaScript. You can share Blazor web components directly in .NET MAUI apps while having access to native device capabilities and packaging. By using .NET MAUI and Blazor together, you can reuse one set of web UI components across mobile, desktop, and web.

For more information, read the .NET MAUI announcement on the .NET blog and get started today! 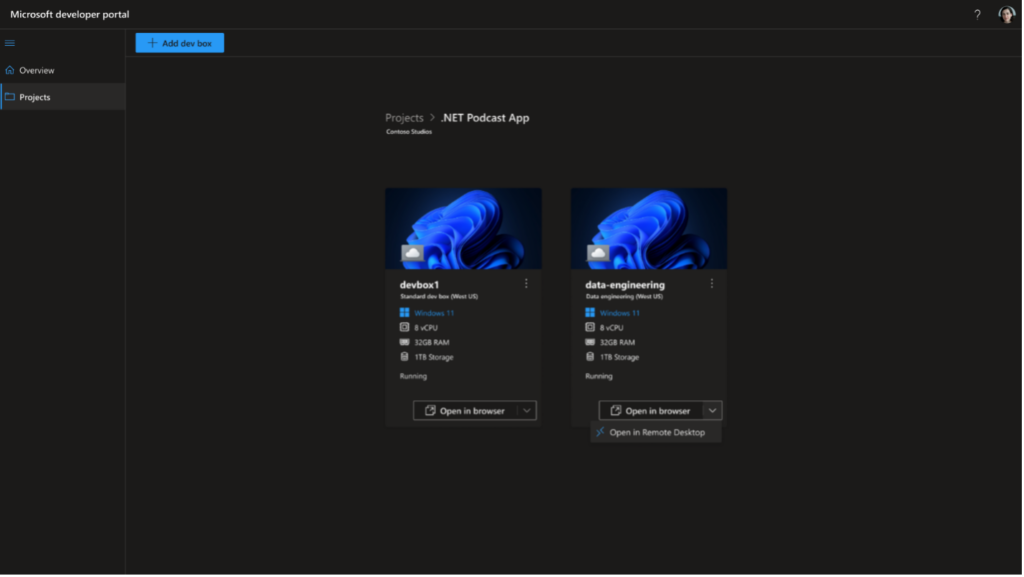 Maintaining a developer workstation that can build, run, and debug your application is critical to keeping up with the pace of modern development teams. As developers, we need the flexibility to set up and maintain our workstations, but even ‘small changes’ can unexpectedly break our dev environments, interrupting our flow and costing hours to undo. At the same time those managing machines and procurement are struggling to give dev teams the flexibility they need to stay productive while keeping all devices in the organization secure and up to date.

This week, we announced Microsoft Dev Box, new cloud service that provides you with secure, ready-to-code configurable Windows developer workstations for hybrid teams of any size. Microsoft Dev Box keeps you in your flow and empowers you to focus on the code only you can write, without worrying about workstation configuration and maintenance. Dev teams preconfigure Dev Boxes for specific projects or tasks, enabling you to get started quickly with an environment that’s ready to build and run your app in minutes. Since Microsoft Dev Box is essentially a Windows 11 machine in the cloud, it’s perfect for Visual Studio development. At the same time, Microsoft Dev Box ensures unified management, security, and compliance stay in the hands of IT by leveraging Windows 365 to integrate Dev Boxes with Intune and Microsoft Endpoint Manager. Over the last several years, DevOps has fundamentally changed the way we develop software. New processes and tools have empowered developers to do more in less time, all while working towards increasingly complex applications. Yet for many organizations, providing developers with the complex infrastructure needed to deploy, test, and run their apps remains a challenge due to the difficulty of balancing agility with security and compliance.

This week, we announced Azure Deployment Environments, a new cloud service that empowers development teams like yours to quickly spin up your app infrastructure using infrastructure-as-code templates that minimize set-up time while maximizing security, compliance, and cost efficiency. You can pick from a catalog of curated templates and deploy them directly from where they live – local CLI or custom developer portal. These templates allow developers to focus on coding and testing their application instead of dealing with the intricacies of provisioning the environment. Additionally, Deployment Environments enables dev infra teams to maintain consistency across teams, centralized common configurations and increase security.

In this post, we talked about the exciting announcements from Microsoft Build 2022 and we cannot wait to hear your feedback and to see what you build with .NET MAUI!

Improved doc management personalization
Visual Studio 2022 allows you to personalize your IDE so you can code the way you want. We’ve added new document management capabilities so navigating tabs and ...