Summary: Editing features for Visual Studio Code that use the PowerShell extension.

With the PowerShell extension, you get IntelliSense for commands, command parameters, .NET type names, member names, and method parameter information as shown in the following screenshot: 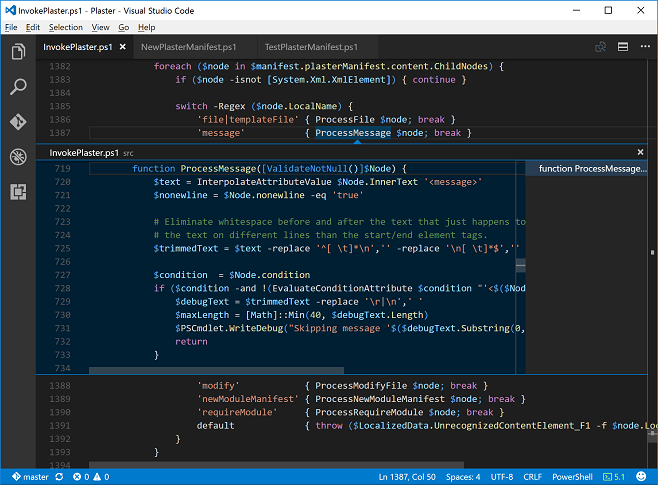 NOTE: This functionality may not work in all cases (across files or scopes), but it will be improved in the future.

To quickly move to functions and other symbols in a script file, you can select Go to Symbol in File… from the Go menu or press Ctrl + Shift + O. This will display all the symbols in the current file as shown in the following screenshot.

Note that symbols are listed in the order they appear in the file. As you move the selection cursor up and down the selection list, the editor will scroll to that function. You can also type part of the symbol name or use fuzzy search to narrow the list.

The PowerShell extension utilizes the PSScriptAnalyzer module to provide background analysis of your scripts to let you know where you may run into problems. Script analysis errors and warnings will appear in your code as green squiggles. Some rules even have a suggested Code Fix as shown in the following screenshot. 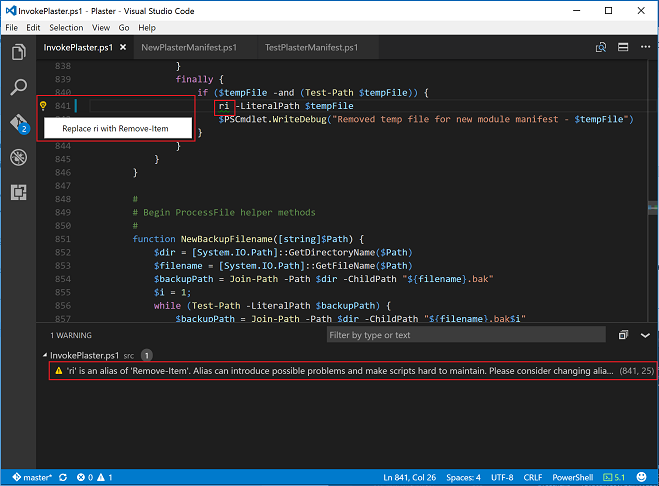 You can configure the settings for PSScriptAnalyzer in two ways. First, you can use a PowerShell extension command and UI to configure which rules to execute. To do so, open the Command Palette by pressing Ctrl + Shift + P (Cmd + Shift + P on Mac), and type PowerShell: Select PSSc, which should be enough to find the command for selecting PSScriptAnalyzer rules. Press Enter to invoke the command, which will display the rule list shown in the following screenshot. You can then select which rules to enable or disable.

The other way to configure PSScriptAnalyzer is via a script analyzer settings file that’s typically called PSScriptAnalyzerSettings.psd1. See the example settings file with the same name that ships with the PowerShell extension. It is located in the $Home\.vscode\extensions\ms-vscode.PowerShell-0.8.0\examples folder. Copy this file to the root of your workspace, and then create a settings.json file (if it doesn’t exist) under the .vscode folder in the root of your workspace. Edit that file and add the following line between the curly braces:

This will configure Visual Studio Code to use the PSScriptAnalyzerSettings.psd1 file in the root of your workspace folder to determine which rules to execute.

A number of PowerShell commands are provided by the extension. You can see these in the Command Palette (Ctrl + Shift + P) by typing PowerShell:.  Here is a list: 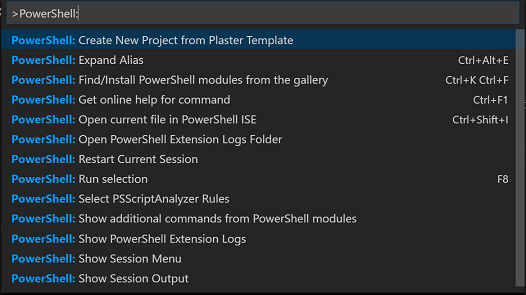 Of particular interest in this list is the Run Selection command (keyboard shortcut F8), which will execute the selected text. You can also expand aliases by using Ctrl + Alt + E. And occasionally, if the PowerShell Editor Services experiences problems where you are not getting IntelliSense or some other feature stops working, you can execute the Restart Current Session command. In fact, there is a shortcut for the latter in the Visual Studio Code status bar as shown in the following screenshot:

In this blog post, we looked at some of the native editing features in Visual Studio Code that apply to any file. When the PowerShell extension is installed, we get even richer, semantics-aware features like IntelliSense, navigation to symbols and script analysis.

View passwords of wireless profiles without using netsh.exe
Ever since the GUI lost the ability to view the password of a wireless profile, I wanted to provide this functionality in PowerShell. A search of the Internet for how to ...

Doctor Scripto
January 13, 2017
0 comment
Nearly everything has changed for SQL Server PowerShell
2016 was the best year in SQL PowerShell history! I guess I should have mentioned that here sooner. Wired® Magazine recently said that Microsoft SQL Server was the ...