The Scripting Guy’s Reflections about TechEd 2012 in Orlando

Microsoft Scripting Guy, Ed Wilson, is here. Well, I wanted to do a short introduction sort-of-piece about Microsoft TechEd 2012. Tomorrow I will post a guest blog written by the Teresa Wilson, aka the Scripting Wife (in addition to our regularly scheduled blog post). In that blog, Teresa talks about the many conversations she had with members of the Windows PowerShell community. She will review resources she pointed people to and share some of her insights and humor. Then on Saturday and Sunday, we have guest blogs written by the two winners of the 2012 Scripting Games. Neither of our winners had been to TechEd before, and being allowed to share their experiences was a wonderful feeling for them. I am certain you will enjoy all these blogs immensely.

So, what did I like about TechEd 2012 in Orlando, Florida? Well, for one thing—indeed the main thing—was being able to meet some of the thousands of people who read the Hey, Scripting Guy! Blog on a daily basis, and share their enthusiasm for one of the most exciting technologies to come along in years.

During the four days of TechEd, there was a steady stream of people through the Scripting Guys booth. In fact, there was never a time when there were not at least a couple of people hanging out at the booth asking questions about Windows PowerShell, chatting with our guests, or discussing things with fellow visitors. Because of our schedule of guests, people knew that they could come to the Scripting Guys booth at a certain time and find guests such as Jeffrey Snover, Don Jones, Jeffery Hicks, Mark Minasi, or any one of the dozens of other guests we had lined up. This kept interest up during the TechEd event, and helped ensure a steady flow of visitors.

Because there were always interesting people hanging around, more people came around to talk. In the following photo, Daniel Cruz, Rohn Edwards, Lido Paglia, and TJ Turner discuss some of the finer points of Windows PowerShell in an impromptu discussion that quickly escalated into a full-blown geek fest. One of the highlights (actually two of the highlights) of TechEd were the two book signings I did at the O’Reilly booth. The first one sold out, leaving dozens of disappointed fans to contend with. So Ken Jones, my acquisitions editor, was able to obtain another box of my Windows PowerShell 2.0 Best Practices book, and he quickly arranged a second signing. It was a lot of fun, and a great chance to meet people. Here is the sign that announced the first book signing. 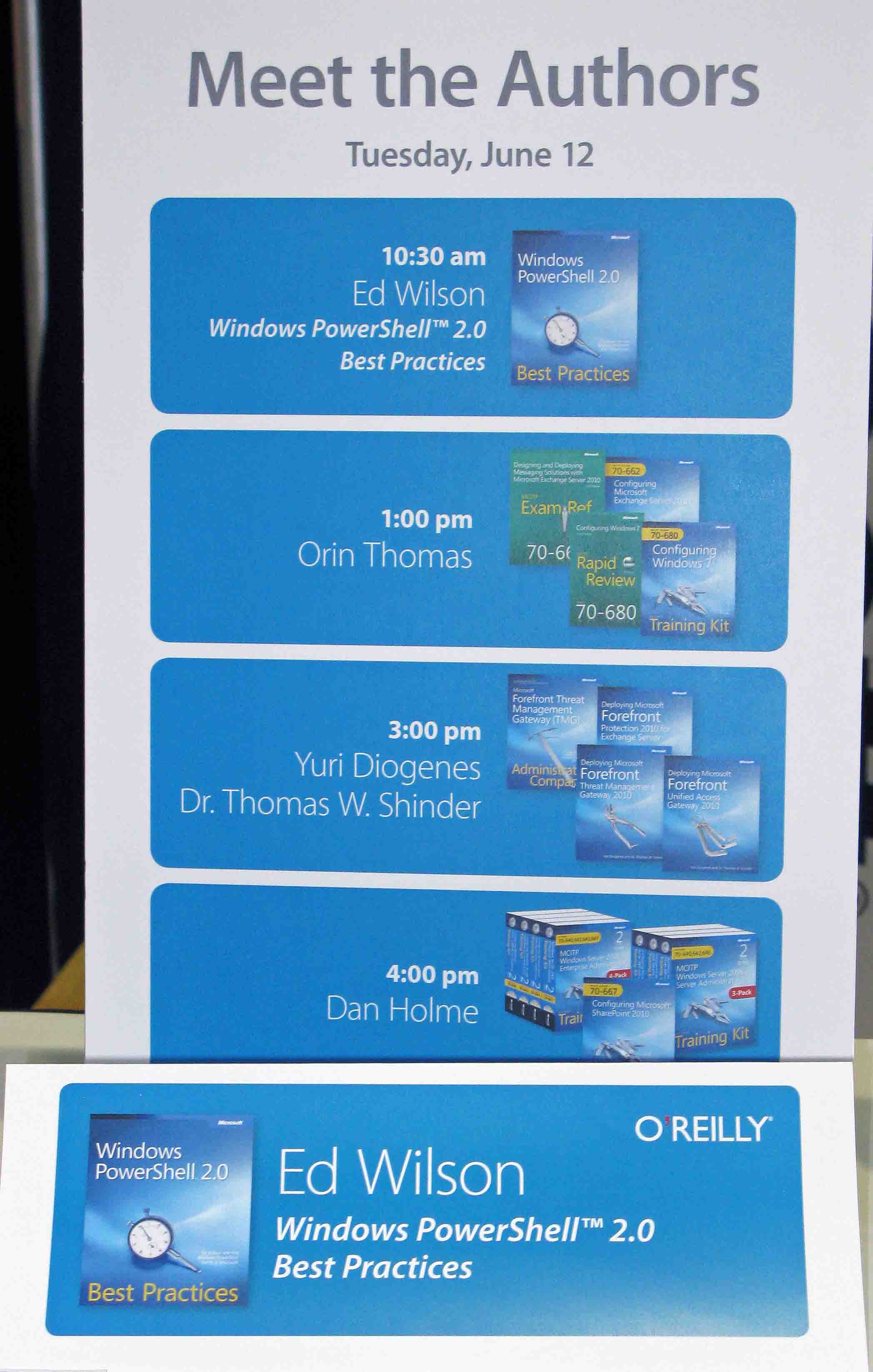 During the long road trip that took us first to SQL Saturday in Pensacola, then to TechEd in Orlando, and finally to IT Pro Camp in Jacksonville, I was able to do a bit of coding (something I completely was not able to do during the 16-hour days at TechEd). I wrote two add-ons for the Windows PowerShell ISE.

The first o add-on copies a script from one pane in the ISE to a new pane. This is great for when you want to edit a script but not mess up your source code. It is also useful for debugging a script. The second add-on will automatically indent your code in the ISE. It uses spaces instead of tabs. The amount of space is configurable. I was also able to find time to blog about these two add-ons. The first one is Weekend Scripter: Copy Text From One Tab in the PowerShell ISE to the Next and the second one is Weekend Scripter: Automatically Indent your PowerShell Code in the ISE.