Microsoft Scripting Guy, Ed Wilson, is here. This has been an exciting week around the Scripting Household. From our lanai, we can see several little rabbits hopping around—they seem to like the clover. We have seen some butterflies (which in past years, we have not seen), and the hummingbirds are back. It is a great time to be out and about. Sitting in a swing, observing nature is a fundamental that helps me keep a positive mental outlook.

Another fundamental is working with strings in Windows PowerShell. In the past (like back in the VBScript days), I hated working with strings. I could do it, but it did not seem like much fun to me. I would rather pull weeds out of the garden than spend a day manipulating VBScript strings. Luckily, Windows PowerShell makes that a bit easier to handle.

A string is an object

By now, you have probably heard that everything in Windows PowerShell is an object. This is one reason why the Get-Member Windows PowerShell cmdlet is so very important. It provides insight into the objects with which one might be confronted. Here is an example of piping a string object to Get-Member and looking at the methods that are available: 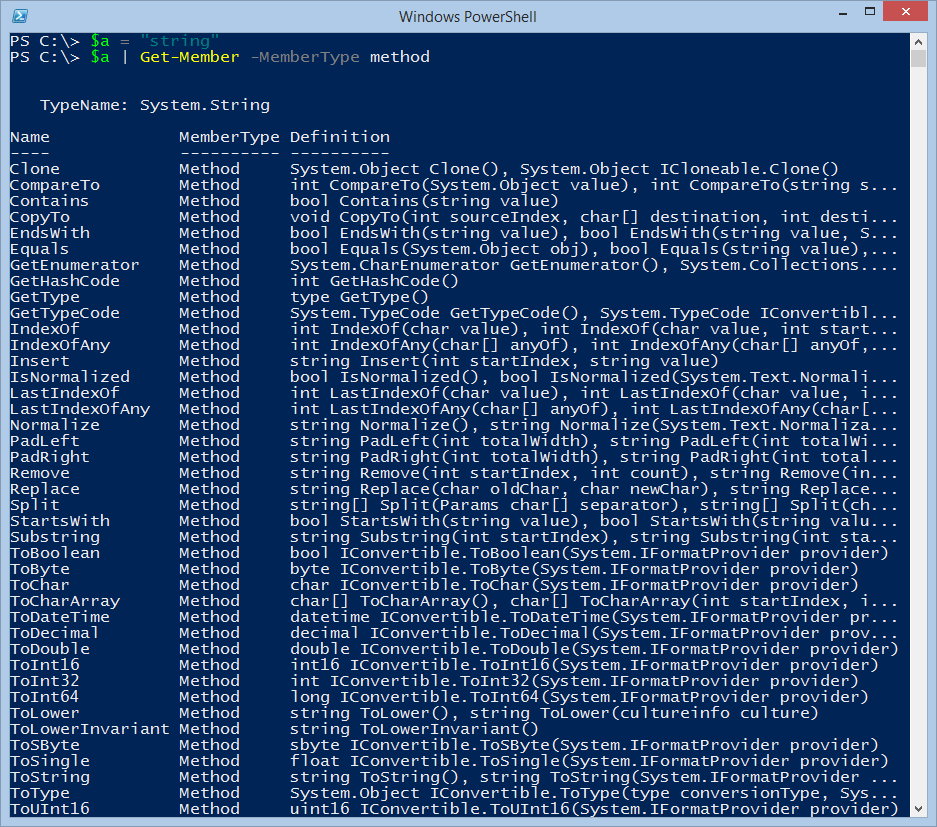 Strings have lots of methods

The string object is well documented on MSDN (for more information, see String Class), and MSDN is the primary source of documentation for all the methods and other members of the objects. Most of the methods are really easy to use. For example, to find the position of a particular letter within a string, I use the IndexOf method. Here is an example of that technique:

The IndexOf method has a couple of overloads. This means that the same method can be used in different ways. As I showed previously, the basic way to use IndexOf is to tell it to look for a letter. When it does this, it begins looking at the first position (index 0). When it finds a match, it is done.

There is another way to use the IndexOf method that combines the first two ways.

Note  According to MSDN, it appears that there are at least 9 ways to use the IndexOf method.

There is your simple introduction to using Windows PowerShell to work with strings. String Week will continue tomorrow when I will talk about more cool stuff.