Welcome to April update! Java 12 is now officially supported with Visual Studio Code. We’d also like to show you some new and helpful code actions now available, along with new features from Debugger, Maven and CheckStyle.

Java is now updating with a faster pace and we’re following closely. Thanks to the upstream update from JDT, you can build your project with Java 12 features now with VS Code as well. To use the experimental language features such as the new switch statement, add the following settings to pom.xml:

Although Java has been there for a long time, it still attracts new developers, and we’d like to make sure it’s easy enough for anyone to start programming Java with VS Code. One of the improvement we made recently is to provide you more detailed information to fix your environment setting.

What if you don’t yet have JDK installed? No problem. When the Java extension pack is loaded, we will automatically detect whether a JDK is present. If not, we will provide you links to download reliable JDK at your choice. 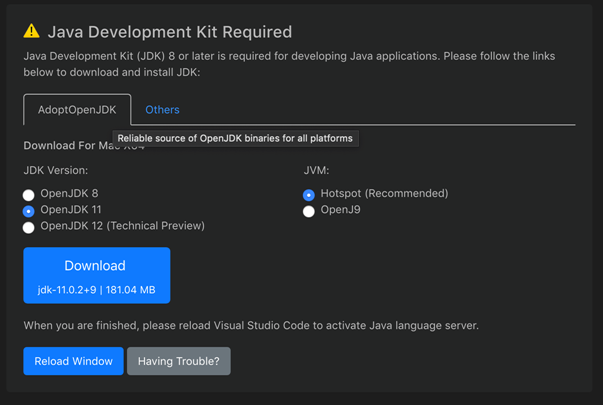 Better yet, we’re also working on a customized VS Code distribution which will help get you ready with everything needed for Java development with a single installer. To learn more, please sign up at the end of this post to receive latest news and updates for Java on VS Code.

We’ve been benchmarking and profiling the performance of VS Code for Java, on all platforms and major scenarios including loading and editing. There were several enhancement to improve performance in recent releases.

As we try our best improving performance, it would still take some time when importing a big Java project to Visual Studio Code. In this case, it would be helpful to show more progress details and let you know what’s actually happening behind the scene. Instead of just showing the percentage of progress, we now added detailed step information into the status, such as inspecting location, configuring project, updating Maven dependencies, refreshing workspace and build workspace to let you know the wait is meaningful.

Code actions are key to your productivity, so we keep bringing more of them to Visual Studio Code.

To deal with ambiguous imports, you now have a dropdown list to pick the right one. The code line with the unresolved type is also presented to you to help you decide.

Now hashCode() & equals() can be generated with default implementations. All the non-static member variables are listed, and you can customize the generated code using the check list.

There are two options for you to customize the generated code:

Picking which fields to be included in the toString() method and configure its template are all supported with the Generate toString() code action.

To create a new variable (correctly typed) from the return value of an expression, the new quick fix extract to local variable provides a quick fix bulb which appears when the cursor stops at the bracket (). The keyboard shortcut is ctrl + .

With this new source action, all the cadidates are presented to you with a checklist. Then you can decide what to override or implement.

You can now convert static functions calls to static imports.

Now you can expand or collapse sections of code to make your Java file easy to read. We’ve enabled a couple popular ways for you to specify which code elements should be considered as a region to fold.

Debugger is one of the most used extension in the Java extension family, and we’re excited to show you the improvements below

Exceptions are now highlighted with extra info in the editor window. Before that, you need to hover on the exception to see details. Now the most important info is presented to you right at where it occurs.

Go to Definition by Clicking Stack Trace in Debug Console

When there an exception, you can now click on the stack trace to see the definition of the function calls.

And a couple new features for Maven as well.

Now you can easily configure your breakpoint and start debug any Maven goals with just a couple clicks.

Now you are able to specify your favorite commands in settings for future execution.

One more thing. There’s one more shortcut to add dependencies. When editing a POM file, there is a shortcut command to search and add a dependency. Try Command Palette -> Maven: Add a dependency.

If you’d like to follow the latest of Java on VS Code, please provide your email with us using the form below. We will send out updates and tips every couple weeks and invite you to test our unreleased feature and provide feedback early on.

Please don’t hesitate to give it a try! Your feedback and suggestions are very important to us and will help shape our product in future. You may take this survey to share your thoughts!

Announcing the Visual Studio Code Installer for Java
It’s been almost 3 years since the first Java language server was developed during a hackathon in a small conference room at Microsoft’s Zurich office with people ...