We’ve introduced a bunch of improvements to our CMake support in the latest preview of Visual Studio 2019 Update 1. The latest release includes Clang/LLVM support, CMake 3.14, better vcpkg integration, and many more enhancements. If you are not familiar with Visual Studio’s CMake support, check out how to get started.

Visual Studio now supports Clang/LLVM for CMake projects and you can now use Clang to target Windows and remote Linux machines. Full IntelliSense is supported along with Visual Studio’s comprehensive debugging support. Check out our Clang/LLVM post for much more information. 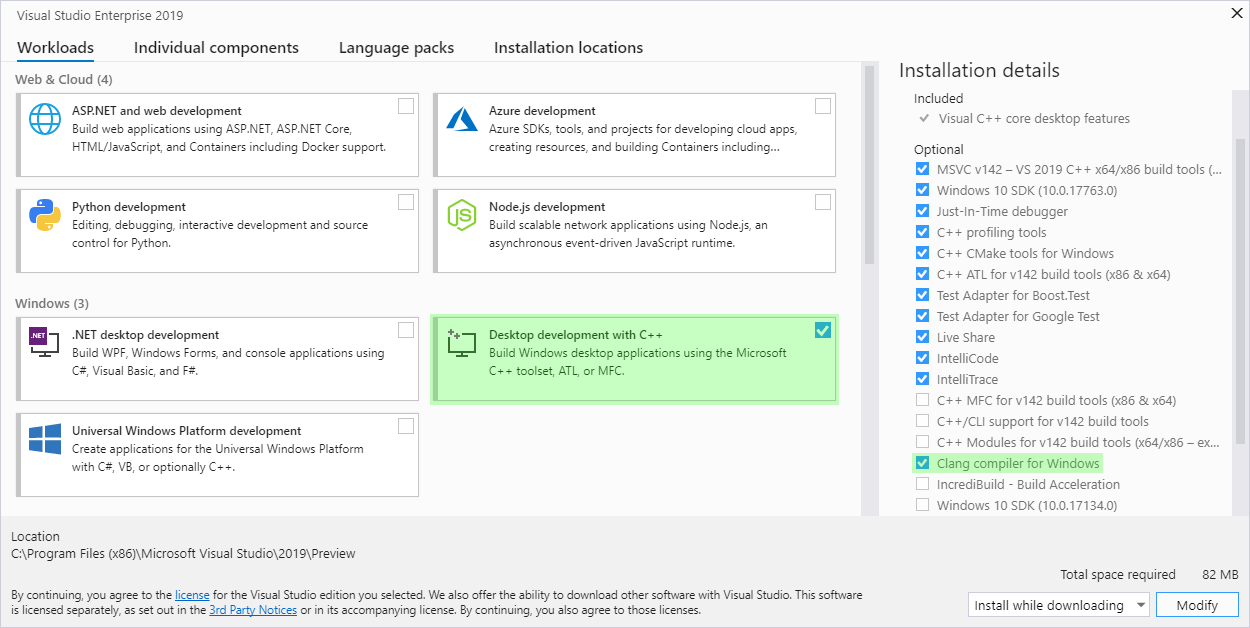 We’ve updated the version of CMake that ships with Visual Studio to 3.14. This version includes the latest MSBuild generators that support Visual Studio 2019. You can learn more about what’s new in CMake 3.14 in CMake’s release notes.

Microsoft also worked with the CMake community to bring a new way of interfacing IDEs with CMake in 3.14 that replaces CMake server mode. What this means for you, is that many CMake operations (especially configuration) will be faster from now on. If you are interested in learning more about this, we are going to be writing a whole post about this soon.

In our first release of Visual Studio 2019 we introduced basic integration with vcpkg. In the latest preview we have enhanced with better integration with IntelliSense. Now, when you are adding a header for a missing library, we will recommend how to install it with vcpkg if it is available. There is also now IntelliSense for CMake’s “find_package” directive:

With Visual Studio 2019 version 16.1 Preview 2 we have updated the default build and install roots for local and remote CMake projects to be more in-line with the standard set by open-source CMake projects. When you create a new CMake project in Visual Studio using the “CMake Project” template, or add a new configuration to an existing project, the following build and install roots will be used. You can change these properties at any time by modifying the “Build root” and “Install root” (or “Remote build root” and “Remote install root”) properties of the CMake Settings Editor.

All of the macros used in CMakeSettings.json can be referenced here. In these file paths:

These changes also resolve an issue with the old default build/install roots for Linux projects where you would see a mkdir failure if there was no write access to the folder (/var/tmp/…).

Changes to the Default CMake Configuration

We’ve added a new way to customize how existing caches are imported into Visual Studio. Previously, the IDE would re-run CMake with its initial settings to refresh the cache and build tree if you made changes to the CMake projects. You can now replace that behavior with any custom script or executable that drives the recreation of the CMake cache. If your project drives CMake with external scripts or custom tools, you can now fully integrate it with the IDE. Edit, build, and debug your complex codebases without having to leave the IDE and go back to the command line.

To use this feature, just set “cacheGenerationCommand” to the command line of your script or tool in your CMakeSettings.json file:

With Visual Studio 2019 you can develop C++ for both Linux and Windows from the comfort of a single IDE. In Visual Studio 2019 version 16.1 Preview 2 we have added logging for SSH connections to remote systems. This makes it easier to diagnose issues with remote connections and provides full transparency into what commands are being executed on your remote machine. Logs include connections, all commands sent to the remote machine (their text, exit code and execution time), and writes from Visual Studio to the shell.

Logging works for any cross-platform CMake project or MSBuild based Linux project in Visual Studio.  To enable logging, navigate to Tools > Options > Cross Platform > Logging, or search for “SSH logging” in the search bar at the top of your screen. You can configure logging to a file or to the “Cross Platform Logging” pane in the Output Window. Note that for MSBuild based Linux projects, commands issued to the remote machine by MSBuild will not get routed to the Output Window because they are emitted out-of-proc. They are, however, logged to a file with the “msbuild_” prefix.

Your feedback is a critical part of ensuring that we can deliver the best CMake experience.  We would love to know how Visual Studio 2019 version 16.1 Preview 2 is working for you. If you have any questions specific to CMake Tools, please reach out to cmake@microsoft.com or leave a comment. If you find any issues or have a suggestion, the best way to reach out to us is to Report a Problem.