With Visual Studio, we want to build the best tools to empower game developers. We joined forces with Epic Games to bring faster semantic highlighting and IntelliSense ready to Visual Studio 2022 for Unreal Engine developers. In this blog post, we will detail how we worked with the Unreal Engine team to significantly speed up the time it takes IntelliSense to start when a new file is opened in the editor by an order of 18x.

When opening a file on Visual Studio 2019, it took 11.0 seconds for IntelliSense to be ready and semantic code colorization to show up. Opening a different file took the same amount of time to get to the same state. Closing and reopening the same file took 1.0 seconds for the ready state.

In comparison, Visual Studio 2022 took 7.2 seconds for the first file to be ready and 0.4 seconds for any subsequent files. 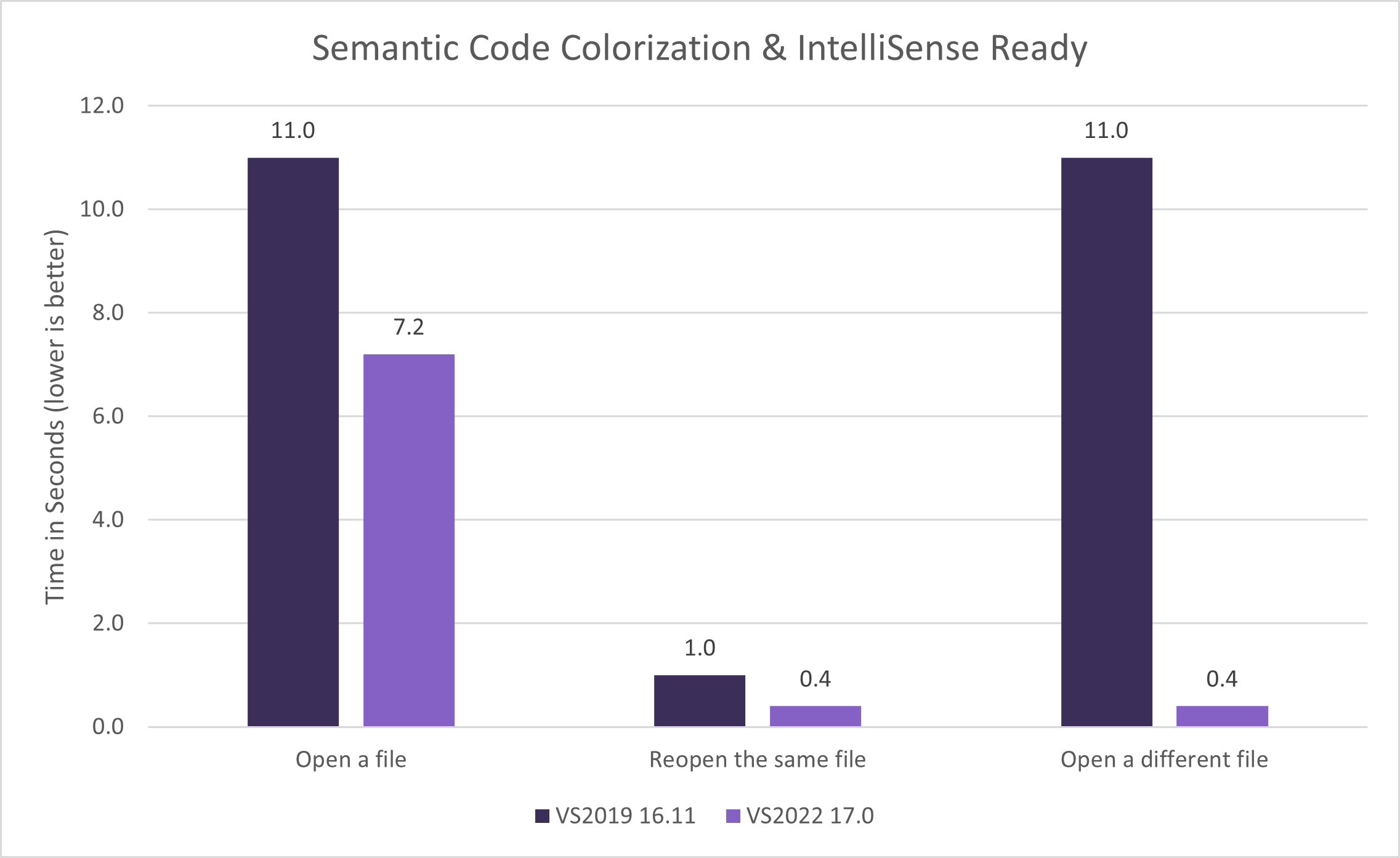 Prior to the change, each translation unit, the C++ and header files in your project, started from scratch with no state reuse between them. Reopening the same file took 1 second; however, because PCHs were not shared between files, opening any file for the first time took the same amount of time for semantic highlighting to show up and IntelliSense to be ready.

In Unreal Engine 4.27.1 projects using Visual Studio 2022, the generated project files are updated to configure IntelliSense to share compilation state across translation units. As a result, the semantic code colorization and IntelliSense completion will be available drastically quicker (0.4 seconds) when switching files in Visual Studio.

In addition, C++ IntelliSense improvements in VS2022 were able to bring down ready time by a factor of 1.5x from 11 seconds to 7.4 seconds. This change will benefit all C++ developers using IntelliSense, not only Unreal Engine developers.

Applying The Change to Your Project

Currently, you will need to manually make an update in the Unreal Engine Editor to apply the changes.

We received feedback about various ways of making the game developer experiences even better in Visual Studio. Throughout the Visual Studio 2022 development cycle, we will continue to make improvements like the one detailed in this blogpost.

How will these productivity enhancements impact you as a game developer? What other enhancements do you wish to see in Visual Studio? Talk to us in the comments below, on Twitter (@VisualC), or via email at visualcpp@microsoft.com

Microsoft C++ Code Analysis with GitHub Actions
Summary of your post, shown on the home page next to the featured image