We shipped App Center Auth in early preview on May 7, and it’s been an exciting month and a half since our launch! During this time we’ve actively engaged with our developers and rolled out a couple of product improvements based on your feedback.

App Center Auth empowers app developers to have a simple user experience for an identity management solution that relies on the robust enterprise capabilities of Azure Active Directory B2C (Azure AD B2C). We simplified the in-app Azure AD B2C configuration through App Center’s SDK by wrapping around Microsoft Authentication Library (MSAL). By integrating a couple of lines of code, you’ll be able to connect an existing Azure AD B2C tenant and use the signed in user’s identity to view their data and send push notifications to the user.

You gave great feedback about exposing the JWT so we immediately set out to add this feature in the June release of the App Center Auth SDK for iOS, Android, Xamarin and React Native.

App Center Auth SDK now exposes the two JSON Web Tokens in the Auth signIn() method: the access and ID token. You can parse this token to obtain user profile information that you’ve collected during the sign-in process or use the token to secure an Azure Function App based on the signed-in user’s authorization.

When a user signs-in to your app, you can specify in Azure AD B2C the user profile fields to collect so that they will be available in the tokens. The key benefit of collecting the user profile information such as display name is to interact with the signed in user in the display UI. For example, developers can display “Welcome, Lupita!” to better engage and personalize your sign-in confirmation page. 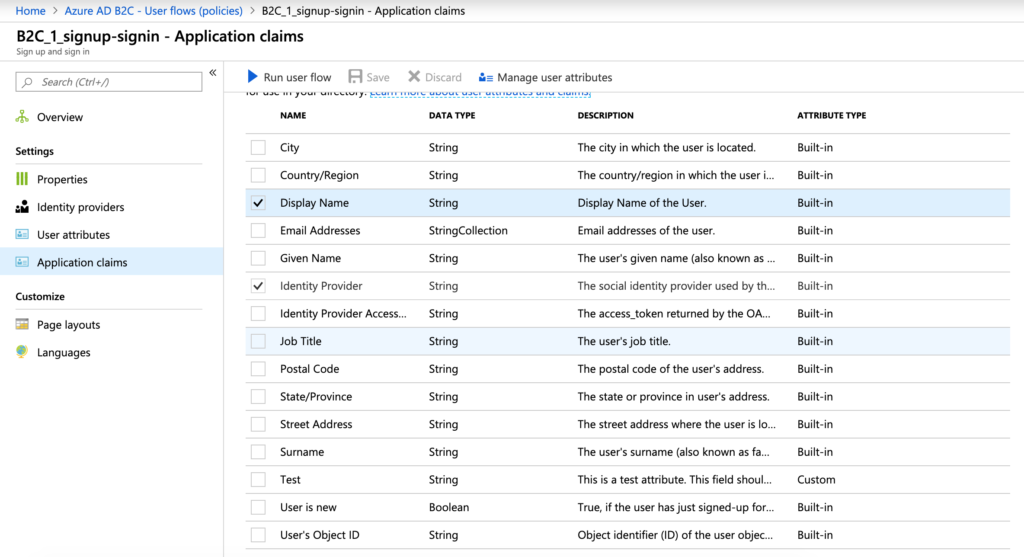 The ID token will contain the user profile attributes that you’ve selected to collect in the Azure AD B2C tenant and is used by your application. The app can decode the token’s contents to get user information such as display name, email and so on, to customize the user experience in the display UI.

The access token is a credential that is used by your application to access APIs and resource servers, and is used by an API. The access token informs the API that the bearer of the token has the right permissions to access the API. This API can then be used to perform actions (determined by the user’s permissions) such as read, write and so on. When the API receives this access token, it must first validate the signature and a few claims to prove that the token is valid.

Here is a code snippet on how you can access the tokens from the signIn() method in C#:

Learn more about retrieving the access and ID token for your iOS, Android, Xamarin and React Native apps.

To make sense of the contents of the token, you must decode it. You can decode user profile information such as the display name or the email address from the ID token or the access token.

Before decoding the token to get user profile information, the Azure AD B2C tenant must be configured to include the user profile fields in the tokens. Learn more about decoding the access and ID token for your iOS, Android, Xamarin and React Native apps.

Here is a code snippet on how you can decode the user profile information for Display Name and Email Addresses in the tokens in C#:

You can also paste your token in http://jwt.ms/ to decode it.

Checking if the User is Signed In

To check if the user is signed in, you can call the signIn() method again. The SDK will not show the sign-in UI again, unless the saved sign-in information has expired or has been revoked by the authentication server.

During our session at Microsoft Build in May, we mentioned that we would support additional platforms for Auth in our roadmap. We’re excited to announce that support for React Native is finally here! App developers can now configure Auth for React Native apps.

For more details on our latest changes view the full list of the user experience improvements that we rolled out.

App Center Auth is in early preview and over the coming months, we invite you to collaborate with us in our journey where your feedback will help us build an identity management solution that you will love. Get started with App Center Auth, and comment on what you’d like to see in our GitHub repo here.

Have fun, and happy hacking! ⚡

Get Started with App Center Auth

Expanding the Visual Studio App Center Network with OneSignal
Developers can now look to OneSignal for configuring an integration with App Center Analytics. OneSignal users can choose to send their analytics events to App Center, which delivers powerful querying tools to integrate events across your app and your infrastructure, with SQL-like querying.

John Wargo [MSFT] June 27, 2019
2 comments
Exploring the Visual Studio App Center Data Roadmap
App Center Data combines the mobile focus and “magic” of App Center with the scalability and power of Microsoft’s NoSQL database service known as Cosmos DB. You can completely control your data with the confidence it will always be available.