Secure and encrypted network communications are a crucial part of mobile application development. Without some kind of security around the communication layer, it is trivial for a third party to eavesdrop and tamper with the messages between the client and the server. If protecting the data being transmitted is important, then some kind of cryptography must be involved to protect both the sender and the receiver from malicious eyes.

There are three important requirements to secure network communications:

Transport Layer Security version 1.2 (TLS) is a protocol that uses certificates and private-public keys to satisfy these three requirements. It is the most common solution used by major cloud providers and web servers. Older versions of TLS should be avoided as they do not meet the requirements of modern, secure communications. In most cases, web servers will reject any traffic from mobile apps that do not use TLS 1.2.

In most cases, Xamarin apps should use either the .NET System.Net.Http.HttpClient class or the System.Net.WebRequest class for network calls. The HttpClient class uses a instance of HttpMessageHandler to process the results of a network call. Xamarin.Android and Xamarin.iOS both provide implementations of the HttpMessageHandler API that will determine what version of TLS the app will use.

Xamarin.Android provides support for TLS 1.2 on devices that are running Android 5.0 or higher by using the Java APIs by leveraging the native. Devices that are running older versions of Android lack the necessary libraries and support for TLS 1.2. If a Xamarin.Android mobile app must support TLS 1.2 then the minimum SDK level must be set to Android 5.0 (API level 20).

There are two settings in Xamarin.Android that will control what version of TLS an app uses. These can be found by right-clicking the project, then selecting Properties > Android Options > Advanced in Visual Studio on Windows, or Options > Build > Android Build > General in Visual Studio for Mac. The Advanced Android Options dialog will have two drop-down lists that control how TLS is used in network calls: 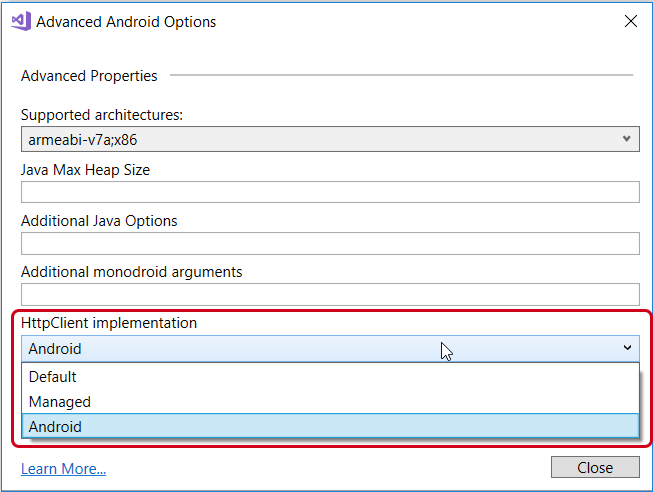 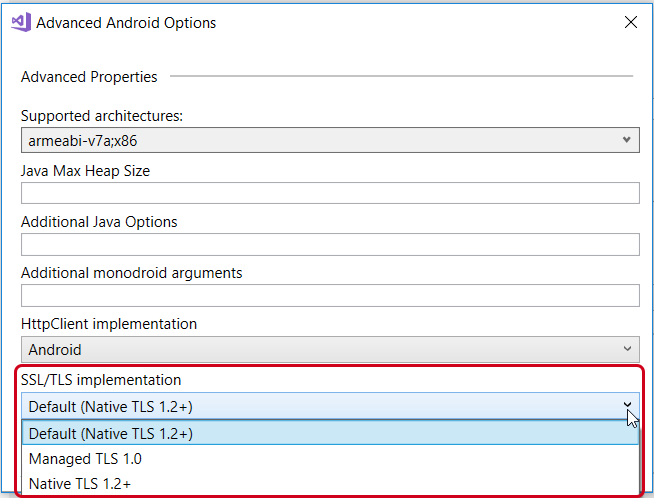 Using TLS 1.2 with System.Net.Http.HttpClient on Xamarin.Android

It is possible to mix and match HttpMessageHandler on a call-by-call basis when creating an HttpClient object:

iOS (and macOS) has a more unified approach when it comes to TLS support. Beginning with Xamarin.iOS 10.8, all iOS applications use Apple’s native TLS implementation, which provides full TLS 1.2+ support for all applications. 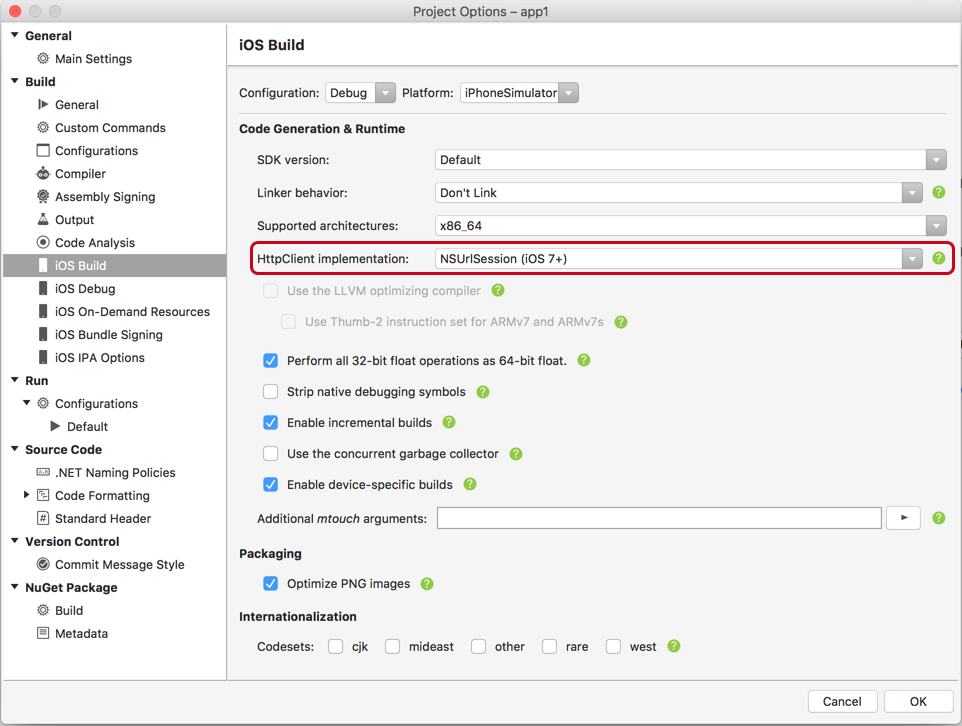 There are three different choices for the default HttpMessageHandler in an app:

The last two, CFNetwork and NSUrlSession, are very similar in that they both utilize native iOS APIs, queues, and threads. This means that the app executable will be smaller and the app itself could have improved network performance. However, because these two handlers are wrappers, they may be missing some of the .NET HttpClient features and options.

It is possible that a Xamarin.iOS app may need to use a HttpMessageHandler that is different from the project wide default. To do this, programmatically create an HttpClient object:

In contrast to the HttpClient class, WebRequest does not offer a way to programmatically change which TLS implementation to use. A WebRequest object determines if TLS should be used or not by inspecting the URI of the request:

This means that WebRequests made on Xamarin.iOS will automatically use TLS 1.2. WebRequests made by a Xamarin.Android app will use the version of TLS is selected in the Advanced Android Options dialog.

The Xamarin documentation on cross-platform development has been updated with all the important details for on using Transport Layer Security for making secure network calls in your Xamarin app.

If you are looking for more details on TLS and .NET in general, Microsoft also has a TLS best practices guide with the .NET framework guide which provides a lot of useful information.

You can learn more with Xamarin University’s free self-guided course Consuming REST-based Web Services, which examines how to integrate with, and consume, RESTful web services in mobile apps.

Finally, Episode 37 of the Merge Conflict podcast describes some of the challenges that were faced with updating an existing mobile app to support TLS 1.2.

Brad Umbaugh
August 10, 2018
0 comment
Attend A .NET Conf Event Near You!
If you have not yet heard of the .NET Conf, it is a FREE, 3-day virtual developer event co-organized by the .NET community and Microsoft. There is a wide selection of live sessions with feature speakers streamed directly from communities around the world and by the .NET product teams. It is your chance to enhance your skills, ask questions to a live audience, and get inspired for your next project.